An exclusive $500-a-head fundraiser for failed Victorian Labor MP Nathan Murphy could end up in the courts after a borrowed apartment used for the shindig was trashed, male and female underwear was dumped on the floor and a $700 coat went missing from the premises.

An exclusive $500-a-head fundraiser for failed Victorian Labor MP Nathan Murphy could end up in the courts after a borrowed apartment used for the shindig was trashed, male and female underwear was dumped on the floor and a $700 coat went missing from the premises.

The apartment’s distraught owner, Michelle Matthews — who is not associated with the ALP and rented out her home and business headquarters as a favour to Murphy’s 26-year-old girlfriend — was shocked to return home two days after the booze-up to find her $1 million dollar pad turned upside down with detritus littered everywhere.

The bed was left unmade, the kitchen filthy, and a $700 Karen Millen trench coat and Black Body brand dress were nowhere to be seen. Disposable male razor blades, Brut deodorant and a his and hers undies set were also found festering.

“I was disgusted, the place was left in absolute pigsty, it was filthy and the underwear was very clearly soiled,” she told Crikey yesterday. 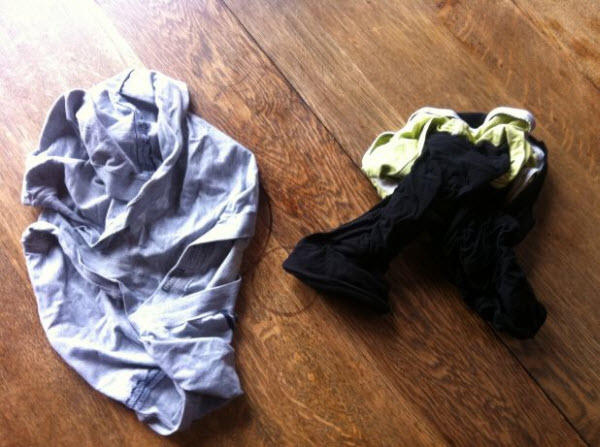 The event, “Nathan Murphy MP cooks for you!”, was held on Friday November 5 as the member was in the midst of a tussle to beat off the Liberal Party for the final upper house position in Northern Metropolitan. An invitation, found scrunched up under a couch, shows Murphy holding a well-basted turkey with the phrase “Earl. Nathan asked to pass on to you.” scrawled at the top. 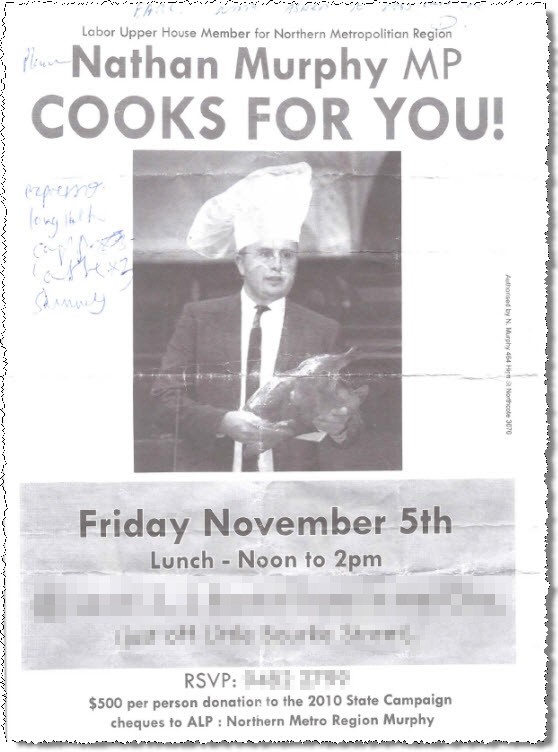 The Victorian secretary of the plumbers union is Earl Setches, for whom Murphy worked as an organiser before being fingered to replace Theo Theophanous last March in the Victorian upper house.

Matthews, who had no idea about the function before discovering the invite, sent a strongly-worded letter to Murphy’s electorate office on December 31. However,  it was then returned to sender, so she forwarded the correspondence to the ALP’s King Street headquarters this week detailing the allegations and demanding an apology, immediate restitution, and the return of her coat.

She remains devastated at the ordeal and the lingering effects on her home and work life: “You scratch your head to begin with and then you discover more and more things that aren’t right and then you find a flyer that someone’s had a political fundraiser on your premises and it’s totally horrifying.”

But it was the unauthorised political activities that really angered Matthews, who heads up the successful Deck of Secrets hospitality card company:

“When a political event is held somewhere that’s very distinguishable as your business, it’s devastating for the image you’re putting out there in the city. I don’t want my business to be affiliated with any political party. They’ve completely abused my property. They knew when I was coming back and there was no surprises about my return date.”

Matthews said she had rented the apartment out to Emily Ballantyne-Brodie for five weeks at a discount fee of $250 a week, much less than the market rate. But when she returned home, there was no key, no note, and the apartment was a mess. Subsequent face-to-face meetings have failed to settle the dispute amicably. The Black Body dress eventually turned up — three weeks later.

Murphy and Ballantyne-Brodie, a local eco-entrepreneur, recently spent 36 days together sailing around the Southern Ocean on-board anti-whaling pursuit craft Gojira with 10 other volunteers from the Sea Shepherd operation. Last year, she auctioned off a dinner for two at Parliament house with her beau to pay for a trip to a Sustainability design conference at the Shanghai World Expo.

The 33-year-old ex-MP, whose father Tony is an assistant secretary of the Plumbers union and whose mother Sandra served on the staff of House of Representatives speaker Harry Jenkins, was a proud member of the Left until a botched 2006 “thrill kill” on Jenkins’ preselection forced him defect to the party’s right with support from Bill Shorten. He is now understood to be working on Frank McGuire’s bid for the state seat of Broadmeadows after being tipped out of parliament last November by the Liberals’ Craig Ondarchie.

The political scion threatened Crikey with legal action when questioned over the allegations this morning: “If you’re silly enough to print that I’ve trashed an apartment…let me tell you mate, you will be hearing from some pretty good lawyers mate because this is completely wrong.”

When asked why the apartment had not been cleaned following the fundraiser, Murphy refused:

“Why do I have to tell you? Who the f-ck are you? You’re not constabulary, you’re not the VCAT. When you’re in politics, you get all sorts of nutters chasing you and there’s no point chasing them because it just creates another story. I’m not giving this story any more momentum than it deserves.”

Murphy said friends of Matthews had also rented the house for a few days around the Melbourne Cup weekend and suggested they might need to shoulder some of the blame for the fracas. He said Matthews could raise the issue with his girlfriend in the Victorian Civil and Administrative Tribunal but called back two minutes later to threaten Crikey:

“This will not be forgotten. If you want to write this story and mention Emily’s name…one of her lawyer friends is going to ring you,” he said.

Two hours later a lawyer called claiming to represent Ballantyne-Brodie, but she refused to be quoted on the record.

Notorious undies spat has had its final day in court

Hulls and Donnellan to mull over Vic ALP deputy role

Steve Fielding coming to a town near you

Crikey indeed, this is unbelievable…

You’ve called it house-sitting & renting. Aren’t they different things? Emily paid for her weeks there didn’t she?

And if the agreement was between the two women, then why is this article predominantly about Murphy?

Actually, what’s the point of this article Andrew?

Dirty laundry! Has to be washed & aired!

This is appalling behaviour from a fellow with a misplaced sense of entitlement. To hold a political fundraiser in a private apartment without the express permission of the apartment’s owner is incorrigible.

That the apartment was left in the mess is just the juicy media meat.

A very valid article, I believe. Murphy aspires to hold a public position of power and trust. People who believe themselves above the hoi polloi, rather than part and representative of it, who feel entitled to do as they please and trample the rights and possessions of others, should not be supported. We have so few quality sources to inform us the character and actions of candidates. Thank you Andrew, for exposing the incident, and for giving Murphy the chance to defend himself. Can’t say I’ll ever be in a rush to vote for a guy that tries to censor the press with threats.