Playing at being an equal player

Call me old-fashioned or just old if you like; I cannot remember an occasion in my 50 plus years as a journalist when I called a politician by his first name during a public interview.

Playing at being an equal player. Call me old-fashioned or just old if you like; I cannot remember an occasion in my 50 plus years as a journalist when I called a politician by his first name during a public interview.

Whether I knew the person well or not (and over the years I actually became friendly with many of them) it was always “Prime Minister” or “Minister” or “Leader” or “Sir” or “Mr, Mrs, Miss or Ms” when I was the reporter and they the politician. It was not so much out of any sense of respect but rather an acceptance that they were the news makers and I but the recorder.

The extent to which things have changed, to a relationship where the journalist assumes he or she has an importance and influence at least equal to that of the politician, was brought home to me last night as I watched that interview on the Seven Network where Seven News reporter Mark Riley challenged Tony Abbott about remarks he was captured making while talking to a military commander in Afghanistan.

In response to silence from the Opposition Leader journalist Riley was moved to say: “You are not saying anything, Tony.”

Tony! An arrogant familiarity from the a rude would-be star!

My views on the incident remain unchanged from those I posted on The Stump last night.

The comment of the day. From that same blog by Bogdanovist:

Tony Abbott is many things, many of them which I don’t like, but on this one the journo is 100% in the wrong. There is no way that Tony was ‘trivialising’ the diggers death, or any of the other nonsense things some bored hack has tried to misconstrue out of this.

It speaks to a larger problem with political journalism in this country (and probably others?) that is forever in the pursuit of the golden ‘gaff’ rather than dealing with anything of substance. No wonder politicians are now 99% sales and 1% (if we’re lucky) management.

Visiting our GP. An interesting snapshot of Australians and their relationship with medical practitioners was released this morning by the Australian Bureau of Statistics. Almost four out of five of us, it seems, visit a GP at least once a year although in 2009, approximately 1.1 million Australians aged 15 years or more (6%) delayed seeing or did not see a GP in the previous year because of the cost. 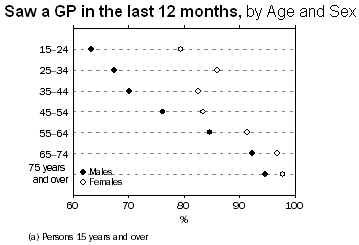 More people in Queensland (8%) and WA (8%) said they had delayed seeing or not seen a GP in the last 12 months because of the cost than people in Tasmania, NSW or SA (all 5.0%). There was no significant difference between people living in more disadvantaged areas and those in less disadvantaged areas, nor was there any particular difference between major cities, inner regional and outer regional/remote areas of Australia. 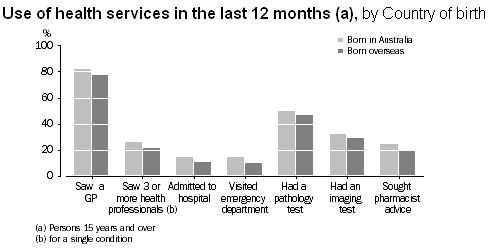 Might also that Mark Riley was a bit nervous…it did look for a moment as though “Tony” might actually belt Mark….by the way did you call Mark Riley just Riley in your story? Perhaps a little familiar of you Farmer?

Pete from Sydney – “journalist Riley” was how I described him.

Perhaps he didn’t intend to trivialise the diggers death, but it could come across that way. More interesting was seeing Tony swinging in the wind without answering, head nodding slightly, for what seemed an eternity.

How should he address him, in your opinion, Richard? (oops, Mr Farmer (they’ve got a lot of titles, the honorable member for Waringah (SP?), Mr Tony Abbott, etc, but a lot of them would sound stilted in an interview))

And how does Abbott address “journalists” he’s familiar with?
Have times changed with that ascendancy of “Limited News”?
No doubt things have changed since you were a reporter – consider the way so many “journalists” seem to have placed themselves into the “reaction” and then want to retreat, like “catalysts” when it gets too hot. “Responsibilty”???? “Utegate”?

I don’t for one moment think Abbott was trivialising that death intentionally – I reckon he (“Rambo”) was upset being caught “tugging the forelock”, as he was – with yet another example of a “poor choice of words” – considering his “mission”.