Julia Gillard heads the list on the back of Cyclone Yasi and, significantly, the heartfelt tears she shed for flood victims when parliament resumed yesterday, writes Media Monitors' John Chalmers.

Julia Gillard heads the list on the back of Cyclone Yasi and, significantly, the heartfelt tears she shed for flood victims when parliament resumed yesterday. We may have witnessed a defining moment in her leadership as the PM eschewed the wooden delivery that characterised her first months in power. It comes, perhaps unsurprisingly, following the reinstatement of her former chief of staff and disaster recovery expert, Ben Hubbard, signalling the pair will “move forward” in less guarded style.

Greens leader Bob Brown leaps back into the fray this week having signalled his party is unlikely to block laws to impose a flood levy. The government needs the support of the Greens in parliament to get it passed tomorrow and though Brown would favour a long-term natural disaster fund he is nothing if not pragmatic. Will the bolstered upper-house power coming his way mid-year unveil a lesser statesman?

After stepping down as treasurer and deputy premier, Kevin Foley will preside as South Australia’s new Police Minister despite the imminent court case to try a man for king-hitting him outside an Adelaide bar. Premier Rann’s latest cabinet reshuffle threw few bones to Education Minister and leadership contender Jay Weatherill, the most popular frontbencher with the public but despised by the powerful Labor right. 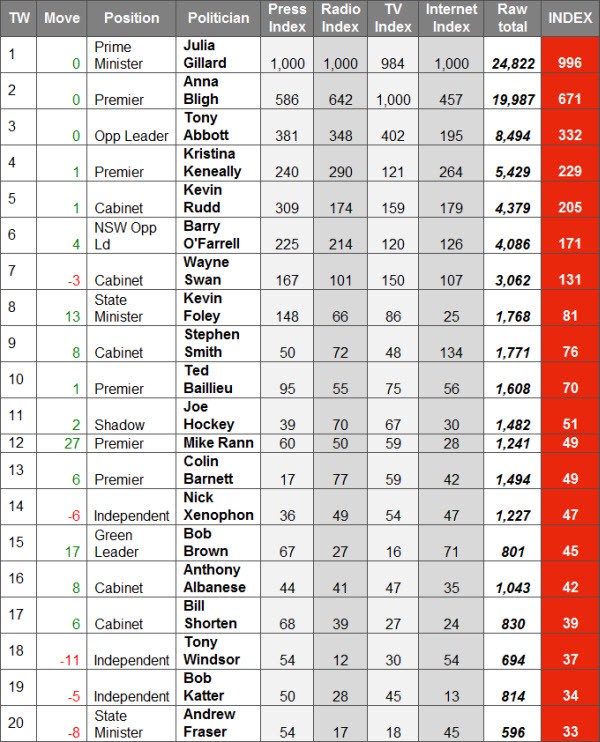 The numbers dipped overall but Abbott is back in the talkback fold. Expect him to climb higher next week following Channel 7’s take on comments he made to Aussie troops in Afghanistan. Think: rock, hard place.

It’s a king-spin love-in as Warnie orders a new mattress just in time for the arrival of Elizabeth Hurley to his Brighton home. Classy.

Crikey Quiz: can you tell the difference between Shane Warne and Donald Trump?

An ‘intimate’ evening with Shane Warne