How shit happened for Tony Abbott

Seven had given Abbott's office two-and-a-half hours notice of the story's angle, including the "shit happens" remark in relation to the death of Australian soldier Jared MacKinney, and Abbott's office had agreed to the interview.

Tony Abbott’s seemingly innocuous “shit happens” remark issued three months ago in Afghanistan seems to have backfired into a much bigger controversy this morning — stemming not from the incident itself but because of the opposition leader’s brusque exchange with Channel 7 political reporter Mark Riley in the Parliament House courtyard.

Seven had given Abbott’s office two-and-a-half hours notice of the story’s angle, including the “shit” remark in relation to the death of Australian soldier Jared MacKinney, and Abbott had agreed to the interview. There was plenty of time for the opposition leader to prepare.

But the encounter turned sour after this exchange, which was replayed in excruciating fashion on Seven’s 6pm bulletins across the country.

Abbott: I was doing my best to support the soldiers that I was discussing with then. Look, a soldier has died, and you shouldn’t be trying to turn this into a subsequent media circus.

Riley: Well tell me, what’s the context then, if it’s out of context, what is the context? You’re not saying anything Tony.

Abbott: I’ve given you the response you deserve.

Abbott’s 20-second pause — in which it looks like the hulking member for Warringah is about to snap his interlocutor in the face — has lead some commentators to suggest that he might be developing a Latham-style short fuse. Or, he might have had a point, given that the substance of the yarn — discovered by accident after a Freedom of Information request in response to the coalition’s attempts to block Abbott firing machine guns in Afghanistan — seemed to have been broadcast completely out of context.

A grainy version of the gun firing — complete with the requisite recoil — had already been shown on Seven last year, shot by News Limited’s Gary Ramage. But Riley told Crikey this morning that his interest in obtaining the official Defence Force reel was piqued after Abbott’s office intervened, leading to a three-month stand-off.

Australian voters probably appreciate a bit of candour from their political leaders. And Abbott’s off-hand references to different types of shit in the past — to Nicola Roxon and on climate change — haven’t really done him any damage.

But it’s still been a baptism of fire for Abbott’s new press secretary, former Ten network journo James Boyce, who took over from Claire Kimball in the job just two days ago. It’s also curious that story hit the headlines now, just days after a Laurie Oakes column speaking of rumblings in Coalition ranks over Abbott’s leadership.

Ian Hanke, a former senior Coalition media adviser and now the head of image and political consultants Media and Political Counsel, slammed the Seven report as a “contrived setup job”.

“It isn’t much of a story either. This is about celebrity journalism where the reporter becomes the centre of the story. Journalists love nothing more than talking about their own stories.

“I thought Tony maintained remarkable composure. What we’re seeing is this growth of celebrity journalism on television.”

Hanke says recent research from Melbourne University academic Sally Young shows the average grab on the television news is down to 6.75 seconds, and that the journalist sometimes talks for triple that, adding their personal insights and analysis.

Riley told Crikey that his interest in obtaining the additional images was sparked after print reports from Peter Hartcher and Paul Toohey went into much more detail than Ramage’s footage revealed. At the time, Riley was quoted in this story, saying the Coalition’s bid to have it suppressed amounted to censorship. His antenna was pricked again after Abbott’s office moved to have the tapes quarantined during the ensuing tug of war.

Riley and Seven’s Freedom of Information Michael McKinnon tsar had smelt a rat and when they sat down to view it, the “bullshit” line was discovered like a gift from the gods.

“I wondered why they didn’t want it released…I  thought it was him firing the weapons. It’s funny what these things uncover,” he said.

On the yawning 20-second delay after Riley queried Abbott on his media circus line, the veteran journo said Abbott should have been able to gauge its impact.

“He’s been in the game for 15 years — he was John Hewson’s press secretary in the early 90s if I recall — so he knew what was coming.”

Tony Abbott’s uni past gets another guernsey

Abbott’s freeze could devastate The Oz 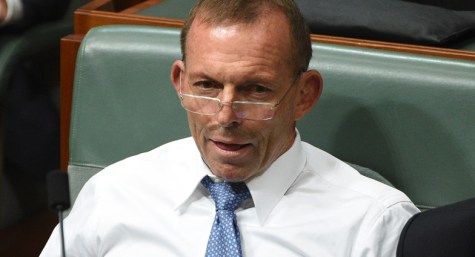 Abbott’s place is on the backbench

I thought boxer Abbott was about to punch Riley!

I don’t like Mr Abbott. (My cards are on the table). He is a terrible leader for the opposition let alone the horrible thought of having him as PM makes me shudder.

But his comment about “shit happening” was not worthy of the news covering it. He was actually trying to be empathetic in his own stumbling sort of way.

What was bad, however, was his reaction to the question about it. Instead of just saying: “You are making a mountain out of a mole hill: I was being empathetic to the people I was talking to”. Instead of responding with a semblence of intelligence or control….. He said nothing… for 20 seconds!

He looked like George Bush needing a minder to tell him what to say. He looked utterly incompetent. It must do him damage politically. Even Liberal supporters must be wondering if such a person can seriously represent the nation at the highest level.

My question on this story is why today? Abbott has just announced his proposed budget cuts with enough problems in them to skewer him a number of times and yet that is when Riley decides to prosecute a non story that only became remotely interesting when Abbott went catatonic.

Also Free Country if you are out there I thought this was an interesting follow up on our media cycle discussion the other day;

“Hanke says recent research from Melbourne University academic Sally Young shows the average grab on the television news is down to 6.75 seconds, and that the journalist sometimes talks for triple that, adding their personal insights and analysis.”

Oh jeez! Not Crikey. FFS hasn’t Australia had (is having) a heaping helping of its own ‘s.hit happens’, without leaping onto the media band wagon on a throw away remark.

What pettiness. Described this morning as ‘gotyer journalism’. Too right.

(………now if you want a discussion on Abbott’s sex appeal–on any damned appeal, then I’m in).

I am not a fan of Tony Abbott, but I think he handled this perfectly.

One up the bracket is what Mark Riley / Channel 7 deserve here but because he can’t do that, silence will have to do.