Twenty-two retiring MPs can't be wrong. Campaigning to be elected to NSW parliament as a Labor MP in 2011 is a bitch of a task. Crikey went to an MP forum in Balmain to see just how tough it will be for one embattled Labor member.

Twenty-two retiring MPs can’t be wrong. Campaigning to be elected to NSW parliament as a Labor MP in 2011 is a bitch of a task.

The state’s voters long ago ditched their baseball bats: they are on their verandas with golf clubs and flaming torches waiting for Kristina Keneally. With Labor’s primary vote wallowing at 20%, almost no seats are considered too safe to lose.

One of the tightest contests is expected to be in Balmain, a socially progressive and increasingly affluent electorate in Sydney’s inner-west. It was always going to be a battle for Education Minister Verity Firth: not only are the voters thoroughly jaded with Labor, but she faces a well-known Greens opponent in local mayor Jamie Parker.

Then, almost two weeks ago, her husband Matthew Chesher, chief of staff to another Labor minister, was charged with drug possession after allegedly being found with an ecstasy tablet.

Saying she was “traumatised” by the news, Firth took three days off work. Upon her return she faced an excruciating press conference in which she refused to deny ever having taken ecstasy. 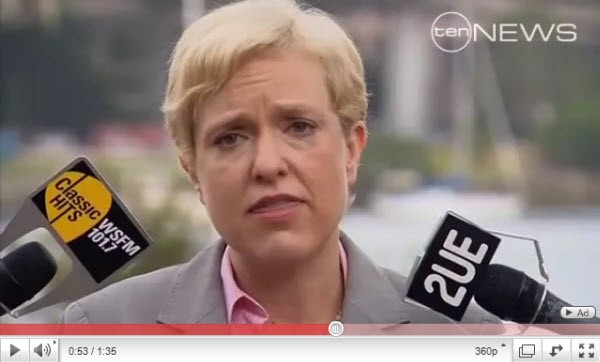 So it took considerable guts for Firth to front a candidates’ forum at Leichhardt Town Hall last night to face questioning from 200 politically-engaged voters.

Thankfully for Firth, who is the sister of Chaser comedian Charles Firth, the topic of drugs only came up once during the two hour event — when, at the end of a rambling statement, a man asked why an Aboriginal friend was in jail for three years for “smoking a joint” but not Firth’s husband.

The man was booed off by the other audience members and his question ignored by the candidates.

Firth conceded that her party was unlikely to win the March 26 election and that the state had gotten off track under Labor. Instead, she stressed her credentials as a member of the party’s Left faction, saying she wanted to help create a more progressive party in opposition.

“Have we erred? Yes,” she said. “Are we coming to the end of a very long term in government? In all probability, yes. But at the end of the day the only parties that will ever form government will be either Labor or Liberal. And I want to be there as part of the renewal of the Labor Party to return us to our roots…and to be an effective opposition so we get the state back on track.”

The Greens’ Jamie Parker said Firth, who he has known for 20 years since their days in student politics, had been a “spectacularly ineffective local member”: “She has been constrained and controlled by the Labor machine in Sussex Street.”

Falk said he would be a strong voice for the local community in an incoming O’Farrell government. His calls for non-partisan planning of infrastructure projects and a single body to oversee Sydney’s public transport system received support from the crowd.

Both the Greens and the Liberals vowed to overturn Labor’s Controversial Part 3A of the state Planning Act that shifted decision-making power for large developments away from local councils to the Minister for Planning.

Verity Firth said she had been a strong progressive voice in the Labor caucus and had helped achieve adoption rights for gay couples and secured a secular ethics education program for children whose parents don’t want them to attend scripture.

Robbo’s rise a bit of a blur, but the NSW powerbroker stands ready to lead

NSW Greens: not easy being green, as high hopes fizzle

Balmain, the birthplace of Labor, taking on a decidedly Green tinge

“…Thankfully for Firth, who is the sister of Chaser comedian Charles Firth,”

Hate to nitpick, but I can’t recall Firth being associated with the Chaser mob for the last four years or so.

Come on, you can’t legally vote and not preference someone. So who? Or are you leaving that up to voters? (cheer!)

I have never heard anyone from the State Left faction have the guts to publicly speak their mind, let alone do something about the major issues, such as public transport, that have languished under this time-wasting government. It is simply not good enough to admit the government has lost its way at this very late stage and make hollow promises about rebuilding the party that has alienated its rank and file.

@Meski. Hi there. Interestingly, in NSW elections, unlike in federal ones, preferencing in the lower house is optional. You can, if you’d like, put Greens/Libs/Labor etc no.1 and leave it at that.