A People’s Parliament or a News Ltd experiment?

Political participation experts fear the Sydney Daily Telegraph's much-hyped takeover of state parliament will be a media stunt rather than the "revolutionary new force in Australian democracy" promised by the paper.

Political participation experts suspect the Sydney Daily Telegraph’s much-hyped takeover of state parliament will be an elaborate media stunt rather than the “revolutionary new force in Australian democracy” promised by the paper.

On Monday The Telegraph, Sydney’s top-selling newspaper, published a front-page splash announcing it would take over state parliament on March 1 to convene a People’s Parliament of 60 Tele readers and 33 experts including 2GB shock jock Ray Hadley and Sydney Lord Mayor Clover Moore. 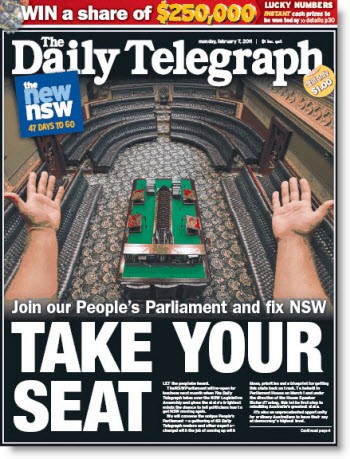 The participants, under the watchful eye of lower house Speaker Richard Torbay, will develop proposals to present to Premier Kristina Keneally and Opposition Leader Barry O’Farrell. The event will be broadcast live on Sky News.

The News limited tabloid, never one for subtlety, predicted the event would be the “first great step to rebuilding Australia’s greatest state”.

“In years to come, when NSW is restored to its full energy and enthusiasm, we may look back on this ambitious project as a great turning point,” proclaimed the Tele. Senior writer Joe Hildebrand described it as a “revolutionary new force in Australian democracy”.

But Lyn Carson, professorial fellow in the Centre for Citizenship & Public Policy at the University of Western Sydney, told Crikey she was sceptical the event will produce significant change.

“My first thought when I saw it was, Fantastic, you beauty,” Professor Carson said. “Then I looked closely and thought, oh dear … It sounds a little superficial to me — little more than a glorified poll.”

Rod Tiffen, Emeritus Professor of political science at the University of Sydney, said: “It’s a bit gimmicky … they’re using this to cover an election where everyone knows the result in advance by making it about them. But that could be all to the good if it works out.”

He also questioned the Telegraph‘s choice of some experts: “Ray Hadley is not an expert on anything.”

Professor Tiffen said a wish list of new ideas would be of little value unless complemented by new ways of cutting funding or finding revenue.

Professor Carson, who in 2009 co-convened Australia’s first citizens’ assembly — the Australian Citizens’ Parliament — says the Telegraph should be congratulated for trying to get NSW citizens more involved in politics. But she says the parliament appears to be poorly designed — participants should be randomly selected, rather than chosen by the newspaper, for one.

“They want people who will create a lively and energetic media event but they don’t always make the best decisions,” she said, adding there would be little time for considered decision given the event is scheduled to run only from 10am to 5pm.

“The event itself should be longer,” she said. “I don’t know what you can practically achieve in a day.”

Ron Lubensky, who is completing a PhD thesis on deliberative democracy, said: “The question is: is this a media stunt?” He’s worried the event is being organised by a “media outlet with a right-wing view, trying to appeal to that audience”.

In a blog post on the People’s Parliament, Lubensky writes: “When Big Media gets involved in public engagement, it can own the news and then report and comment on it. To what extent will it try to control the outcome? My most worrying concern is that the process will be far from deliberative, meaning that it does not engage participants with each other in a constructive, inquiring, reflective manner.”

“On the way to the ballot box, I grab another quick vox pop. A husband and wife, he a retired public servant, she an immigrant from Eastern Europe, judging by the accent. They got a call from Galaxy last night. They were enlisted toot sweet and asked if they knew anybody else might be interested. Their daughter, a university student, could’ve done with the $50 but she had a shift at her part-time job. They thought the whole thing was pretty dodgy. By way of illustration, the bloke uncurled his hand and showed me three tokens. I added mine to his collection and wished him happy rat-f-cking.”

let’s be honest, Crikey was going to bag anything that a News Limited publication tried to do …even if it is an attempt to involve people in the unloseable election…

was there any attempt to get hold of the Tele editor to get a feel for his reasons for doing it?

Whats the point? The result is a done deal. With the Treasury benches there for the sitting on, who honestly believes Barry O’Farrell is going to take seriously anything from the Tele’s forum?
Just a great big new stunt from News Ltd and Sky.

Will this “peoples parliament” be able to revisit those “media ownership laws” – in light of what they’ve done to our “political system”?

Balmain independent candidate Jon Shapiro (www.myspace.com/makepoliticshistory) drew our attention during a recent discussion to the “terms and conditions” of the so-called “people’s parliament”, and convincingly argued, referring only to those terms and conditions, that not only is this likely to be a stunt to sell newspapers, but it is positively Orwellian, for it is actually easier to be elected to parliament than to be selected (by Telegraph bosses, not ordinary voters) for this charade!