Speaking out against the President and Egyptian government has been problematic at the best of times but it is probably safer now than ever before with all eyes on their every move, writes Vickie Smiles, from the Egyptian city of Alexandria.

Despite the apparent but fragile normalcy of life in urban Egypt, anti-Mubarak protesters continue to man their posts, at Tahrir Square in Cairo and the Al-Qaed Ibrahim Mosque in downtown Alexandria.

As President Hosni Mubarak sits on the sidelines, refusing to budge until September, the forces of government led by his new vice-president, Omar Suleiman, appointed on January 29, are flooding the airwaves of state television and media with much talk and little action.

No comfort for the protesters! Particularly when their brothers in arms are a disunited collection of Opposition factions who want to be inside the tent talking to Egypt’s unpopular rulers one minute and outside the next.

Members of the biggest Opposition, the Muslim Brotherhood, can’t even agree whether it was a good idea to meet with the government on Sunday.

Mohamed El Baradei, on the other hand, is remaining firm with the protesters, refusing dialogue until Mubarak goes but he has little public support for such intransience.

News that Google executive and political activist Wael Ghonim was released today from government detention (a week after his mysterious disappearance) gave the protesters a boost but their demands for an end to emergency laws have fallen on deaf ears.

These are the laws that give the government carte blanche to stifle opposition and dissent, and the secret police and security forces a free hand in taking whomever they like off the streets for interrogation.

Thousands of people have been detained over the years, from activists to human rights workers and even some of the Brotherhood members who met with the government yesterday.

Speaking out against the President and Egyptian government has been problematic at the best of times but it is probably safer now than ever before with all eyes on their every move.

Ismail Serageldin, the internationally renowned director of the Bibliotheca Alexandrina, effectively did that yesterday in a letter to friends of the library around the world. 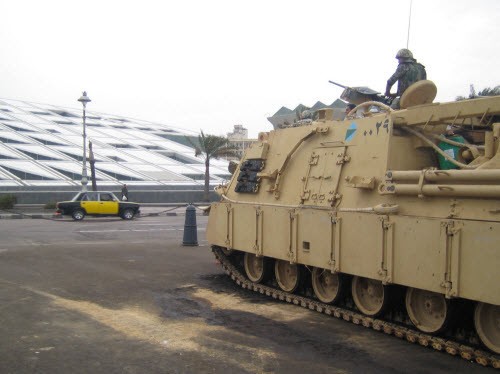 The Library of Alexandria, under protection from the army

“The world has witnessed an unprecedented popular action in the streets of Egypt, led by Egypt’s youth with their justified demands for more freedom, more democracy, lower prices for necessities and more employment opportunities,” he said.

According to Serageldin, the library was safe “thanks to Egypt’s youth, whether they be the staff of the library or the representative of the demonstrators, who are joining us in guarding the building from potential vandals and looters”.

“The young people organised themselves into groups that directed traffic, protected neighbourhoods and guarded public buildings of value such as the Egyptian Museum and the Library of Alexandria.

“They are collaborating with the army,” he said, in an arrangement that would remain in place until full public order returned.

“I am there daily within the bounds of the curfew hours. However, the library will be closed to the public for the next few days until the curfew is lifted and events unfold towards an end to the lawlessness and a move towards the resolution of the political issues that triggered the demonstrations,” he concluded.

Almost 300 people have died during the anti-government uprising over the past fortnight, according to preliminary estimates from the US-based Human Rights Watch.

Egyptian doctors, however, expect the numbers to be higher with some saying up to 500 dead and 6000 injured.

Such figures will only harden the resolve of protesters to maintain their rage at a government, which continues to ignore their most pressing demands and take the slow-road to reform.

It’s good news the library is safe. In the event of regime change, it will be even better news if it then remains safe.