A Media Monitors restructure will see redundancies in Melbourne and New Zealand. Plus, the politics and economics of the Huffington Post/AOL merger, how the social media world reacted to Super Bowl ads and other media news.

Media Monitors cuts Melbourne staff. A Media Monitors restructure will see redundancies in Melbourne and New Zealand. Studio operations — providing audio and video to clients — will be cut back, with some of the tasks moved to offices in Kuala Lumpur. Five job losses are expected in Melbourne and one across the ditch. Staff were told about the changes in meetings last week.

Media Monitors’ Patrick Baume tells Crikey it’s a “one-off internal resource decision” and the company’s national operations staff of 300 will maintain studio resources in all offices to ensure service to clients. Staff numbers have increased this financial year, he says, primarily in the growth area of media analysis. — Jason Whittaker

Dog-gone, is this news? “See it first on Nine News,” Melbourne talking head Peter Hitchener says in promos airing across the network. We think the video of Nine’s First Dog scoop speaks for itself… 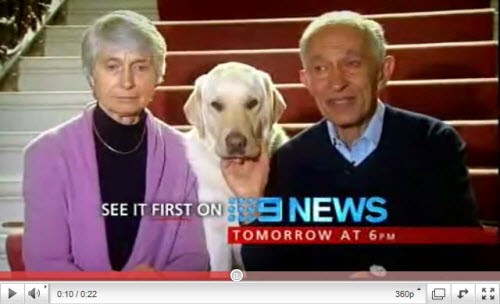 “At home with the governor’s best friend…

“Despite his vice-regal status he keeps his paws firmly on the ground.”

“In AOL’s 25 years of existence, the Dulles, Va.-based internet giant has blown through $11.3 billion, by our count, snapping up dozens of start-ups, including ad networks, social networks, blogs, blog networks, internet service providers, email providers and search engines — more than 50 deals in all.” — Forbes

HuffPo sell-out: the rapid rise and sale of Arianna Huffington

“Ordinarily, when a gigantic media organization swallows a startup like HuffPo, it lies about wanting to preserve the founder and all the talent he or she has assembled in their leadership roles. Then they fire them. But in this instance, AOL has handed Huffington the keys to its entire editorial kingdom.” — Slate

HuffPo sell-out: the politics of the AOL merger

“The question then is: Will the newly moved Politics Daily’s straight-news reporters and ideologically-mixed pundits be forced to now write in HuffProse –the generally liberal-leaning newsflashes of “bashings” and “blastings,” and scathing anti-right op-eds that proliferate on Arianna’s website? Or will the famously ideological pundit, editor, and author keep things ideologically clean, as she is promising?” — Columbia Journalism Review

“When you’re sitting in an army vehicle blindfolded and handcuffed and the man in front of you is apparently being bashed, the word ‘welcome’ sounds hollow. That was the experience I and seven others had in Cairo last night. At an unknown location, for an hour or so, soldiers walked around the bus — which had had all of its windows smashed — asking our names and jobs.” — The Australian

How the social media world reacted to Super Bowl ads

“Online discussion about Super Bowl commercials increased 9% in the 12-hour period following the game’s start, compared to last year, according to marketing agency Zeta Interactive. Most discussion focused on the game itself, followed by ads, Christina Aguilera’s rendition of the national anthem, and the Black Eye Peas’s halftime show.” — Mashable

“The Guardian’s Moscow correspondent has been expelled from Russia, in what is believed to be the first removal of a British staff journalist from the country since the end of the cold war.” — The Guardian