Looking at Rembrandt looking at himself

I’ve been a couple of times to see the NGV’s self-portrait exhibition, Naked Face. Christopher Allen in the Australian totally trashed the show. On the catalogue: “Gerard Vaughan, the gallery’s director, describes Vivien Gaston’s catalogue text as inspiring … The writing is dull, peppered with cliches and seldom even perceptive, let alone thought-provoking.” Paragraph 5 […]

I’ve been a couple of times to see the NGV’s self-portrait exhibition, Naked Face. Christopher Allen in the Australian totally trashed the show. On the catalogue:

“It’s hard to decide which is more appalling, the exhibition design or the selection and sequence of works, but in the end the latter has to be held largely responsible for the former. What can a designer do with an exhibition that is incoherent to start with?”

My response to his response is to have visited the show a couple of times, and I’ll go again this week. (It’s free.) I think Allen went out of his way — in a massive, major detour — to be extraordinarily harsh. (As a very qualified friend of mine says, how many brilliant or fully resolved shows go up in this country anyway? Why pick on this one?) Without debating his points here, I simply do not think anyone but an art critic goes in with that set of criteria, that agenda. If it’s a brilliantly finessed show, well then, the visitor is buoyed and energised. Otherwise, probably like me, visitors go in simply looking for pictures and faces they can connect with, or fall in love with. Never mind Facebook, this is FaceRoom.

From the show, right: Rembrandt Harmensz. van Rijn. Sheet of studies with the head os the artist, a beggar man, woman and childl 1651, etching

There are a lot of terrific pictures to look at; hearteningly, they are (almost) all drawn from the NGV’s collection. What I found myself returning to are the classics, either indicating I’ve fogeyish tastes, or that indeed, a classic is that which withstands the many tests of time, transcending fashion (Pow!) and, not quite the same, period styles (Wham!).

One of those is the NGV’s Rembrandt “self-portrait” — deregistered as an actual Rembrandt painting in 1984, but recently upgraded so the wall label now reads: “”REMBRANDT Harmensz. van Rijn, REMBRANDT Harmensz. van Rijn (studio of).” But it’s in this self-portrait show, so they’re giving it the benefit of the doubt. In any case, I’ve always thought it was a very good piece, and if it was by another hand it means that the other painter had very good eyes and hand, too. (There’re quite a lot of dubious “self-portraits” in the show, eg Dürer’s irreducibly amazing engraving, Melencolia I.)

You have to squint hard at the “Rembrandt,” the slightly smaller than life-size head and shoulders, looming from its very dark, shellacked Dutch browns. It’d’ve been a dark painting anyway, even before the layers of varnish its owners have lavishly preserved it with over the last 350 years.

I got up close and did a pencil sketch. (Only five years ago a gallery guard told me to put my pencil away as I attempted to draw a Nolan; under glass! I might have stabbed the picture and injured it … I started a correspondence which concluded in the gallery advising me that it was a matter of insurance, and that the gallery director had been advised of my “complaint.” Marvelously, another recent improvement in public relations is allowing photography of gallery-owned art, finally bringing the NGV in line with world standard.)

I was sketching to try to bring the structure into the light, and to look at how Rembrandt was looking out at himself, or the painter, or us. He looks a little younger in the painting than I would have expected as it’s later than the phenomenal 1655 self-portrait in Vienna (clicking the link demonstrates again the inadequacy of viewing paintings online), where he seems to be conducting a weary staring contest against the hourglass. I’ve looked hard at this picture, and … hard to tell if it’s just my imagination, but I felt something of the circuit that went between the painting and the painter — the space you or I occupy as the viewer is, of course, the same spot where Rembrandt stood, it’s part of the aura of the unique object that is a painting.

Back in the NGV, our Rembrandt has R’s distinctive longish nose with the big bulb, the flabby cheeks and jowls, the many ridges and creases between the brows, those eyes — the whites almost lost to the irises. The pursed mouth with the overlip and its minor key moustache. All accounted for. And, I’m pretty sure that he’s wearing the same jacket and red shirt in the NGV picture as in Vienna’s (has that link been made before?).

Here’s the head detail of the Rembrandt with my etching based on the sketch, shown at comparable scale. (Doing an etching of Rembrandt is asking for trouble as he is just about the champion etcher of all time.) I’ve tilted R to the right somewhat, and skewed his eyes. Mmm, don’t ask — that’s just how it came out. The painting has a kind of wistful melancholy, maybe it was a blue day for the old master. Mine makes him alertly quizzical.

The image below shows my etching overlaid on the full painting — it turns out pretty accurate after all, at least in proportions. We can see how the head — the lit up area — takes up only about a fifth of the whole picture, which is similar to the proportions of the 1655 portrait of face — the lit up area there — to total area. He used a lot of space — most of it featureless — to make the portrait.

You can see how the cropped head above differs from the full picture below — the level of intimacy changes; the figure in in the full portrait is alone — a lone figure — separated from us. Perhaps the distance is a way of acknowledging that we can only ever see so much — that a very close view (of which there are quite a few in the NGV show) is a ruse, suggesting that we can understand ourselves more than is possible.

The looking is the question, the painting is the answer

Doing this exercise reminded me how various are the looks one has and how infinitely various are the shades that inflect an expression even when they are recognisably of the same face. (Another thing it prompts is how, when one does not recognise a portrait likeness it’s the artist’s failing, but if one doesn’t recognise a photograph, it’s the viewer’s.) Which is a kind of answer to a question one might ask of Rembrandt who painted 40 or more self-portraits (a question one might ask of this whole show): Why picture yourself?

It’s because the “I” is only the eye of the storm, a void centering fluid, swirling forces. Our inconstancies brought on by age (the leap from 17 to 21! from 48 to 50!), or illness, or weight gain and loss, or periods of happiness and discontent. Of accrued self-knowledge, of accumulated realisms about the world.

There is no definitive portrait, as anyone who has looked at Rembrandt’s many self-portraits would know. What he most acutely shows us over that long series — his life studies — are that one can only look at oneself in uncertainty. The looking in the mirror is the question, the recording — the painting — is the answer. Any writer spinning an essayistic riff on a Rembrandt self-portrait probably falls into the category of autoanalysis. We can only look, as the painter looked. “Whereof one one cannot speak, thereof one must be silent.”

NGV is 150. Happy birthday! It should give itself a present: do something about the one day a week closure; no other major city gallery in the world does that. And if you missed it, you can hear NGV director Gerard Vaughan talk to Phillip Adams on Late Night Live.

For an opposite review to C. Allen’s, see Robert Nelson in the Age: “this rich and imaginative show.” 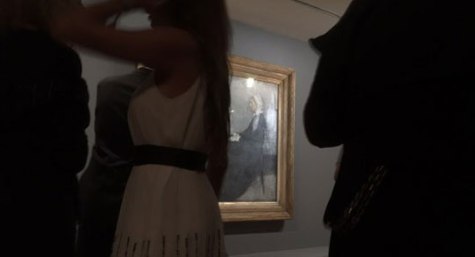 Is Whistler’s Mother really all that good?