The thing that came across to me from last night's Four Corners profile of Julia Gillard is just what a determined and dedicated player she is of the political game.

Determination showed through. The thing that came across to me from last night’s Four Corners profile of Julia Gillard is just what a determined and dedicated player she is of the political game. She appeared as very much the political realist not bound by ideological hang-ups; someone quite prepared to abandon a view, even an apparently firmly held one, when circumstances change. That’s not a bad starting point for someone holding the job of Prime Minister.

There were two areas where the lady clearly is not for turning: a belief in the power of education to produce a fair society and a commitment to Israel. The program showed Ms Gillard has had consistent views on those subjects from her student politics days to the present.

Mondayising. New Zealanders celebrated Waitangi Day on Sunday which meant there was no extra public holiday. So what did Australian diplomats in the country do? They took yesterday off in lieu. 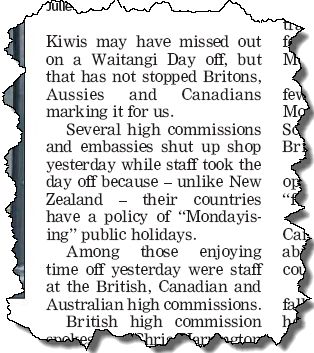 From Christchurch’s The Press this morning

It’s a tough life being a diplomat.

A different sporting culture. The US Superbowl yesterday proved there’s one difference between Australian and American political culture. While our Prime Minister would not dare miss out on being seen on the television attending the MCG on Aussie Rules grand final day, American presidents stay in the White House and watch on television. Not that Barack Obama missed out on the coverage.

The host network for American sport’s day of days precedes the football coverage with an interview of the President. Yesterday it was the turn of Murdoch Fox Television to bring people the game so President Obama had to front up to chat with the Fox News interviewer Democrats love to hate. 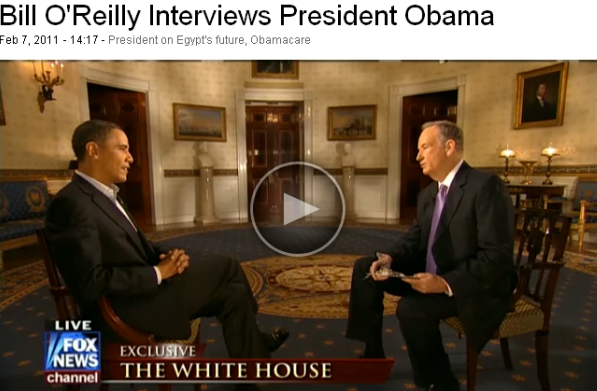 An interesting interview that I scored as a nil all draw really with the President escaping unscathed after being watched by what was probably a record television audience for a politician. The Superbowl itself attracted the nation’s highest ever ratings for a television show at 111 million.

It doesn’t really matter what Kristina Keneally promises. NSW Labor’s election promises will never be kept so there’s no point in wasting space analysing them. To put it simply, the incumbent government cannot win. The best Mrs Keneally can hope for with her extravagant bag of goodies is that there will be a person or two out there somewhere who might be silly enough to think that they might actually get what she promises.

When spies fall out. The case of the American being held in Pakistani custody after shooting two men on motorbikes dead in the middle of a Lahore street (see earlier stories in Crikey here and here ) gets more cloak-and-dagger by the day.

Overnight the wife of one of the dead men committed suicide and that has further inflamed anti-US sentiment in the country. And now it appears that the dead men were Pakistani intelligence operatives. The Express Tribune reports that the government’s reluctance to free Raymond Davis is attributed to the fact that the two killed in the Lahore shooting were believed to be the intelligence operatives.

“Yes, they belonged to the security establishment….they found the activities of the American official detrimental to our national security,” disclosed a security official.

He requested not to be identified since he was not authorised to speak to the media on record.

The official confirmed that the president, the prime minister and the chief of army staff (COAS) had discussed the issue in a meeting last week. The three thought it was advisable to resist the US pressure on the Raymond Davis issue and believed the detained American national should not be released at this stage, he said.

He said the government’s tough stance on the controversy was also its reaction to the attempts by certain elements in Washington to implicate the country’s top spy agency, the ISI, in the November 2008 Mumbai attacks.

“The government is very angry with the decision of an American court to summon top ISI officials in connections with the Mumbai attacks,” the official maintained.

The thing that came across to me from last night’s Four Corners profile of Julia Gillard is just what a determined and dedicated player she is. [… further panegyric]

As Education Minister, Gillard was really just a more politically effective Julie Bishop. The NAPLAN/MySchool thing is a quintessentially conservative agenda. The majority of people who work in, or research, the education system know that it is not appropriate to view NAPLAN score averages as a valid measure of the quality of whole-school performance but Gillard’s public statements have encouraged people to do just that. Is this because she is too arrogant to listen to advice from people who understand education better than she does or is it a cynical assessment that it will play well with the electorate even if it is not true?

The two areas in which the article suggests re Gillard that, “the lady clearly is not for turning”, i.e. Israel and education, are also areas in which proponents tend (once they’ve adopted a stance) to become immune to the possibility that they might conceivably be wrong. In light of the damage well-intentioned ‘do-gooders’ have done to education, this can sometimes be a shame. Whether or not it’s a bad thing re Israel depends on such things as whether or not you believe an alleged ancient real estate deal between God and some wandering tribes was enough to dispossess the inhabitants of Britain’s Palestine Mandate.

Can’t life be an inconveniently complex matter at times?

I found the whole uncovering the real Julia a waste of my time to watch as you didn’t get much of a sense of what drives our PM as she managed throughout to keep to her scripted political talking points rather than any rationale behind them.

How did we learn anything, from that fantastic bit:

Interviewer: “are you a loyal supporter of Israel”
JG: “yes”

Then the interviewer drops a perfect opportunity to probe the issue to understand why (and by extension get an understanding of our prime minister underlying thinking on the issue).

I agree with your point about the reporter not following the Israel question.

What an absolute waste of an opportunity to find out once & for all why Israel can do no wrong, despite its current rapid ascent into a apartheid State.

Dullard Gillard is a waste of time, as 4C showed

She’s never had what it takes, never will.