Hywood gets the Fairfax gig .. Munro gives up the fight

Fairfax is still insisting today it conducted an "international search" for its new CEO. But however extensive that search was, the result remains what was long predicted -- interim head Greg Hywood has been endorsed as leader. Plus, Mike Munro gives up the fight and other media news.

Hywood has the job — look for the changes. Fairfax is still insisting today it conducted an “international search” for its new CEO. But however extensive that search was, the result remains what was long predicted — interim head Greg Hywood has been endorsed as leader.

The company went to the ASX today with the news following a board meeting on Friday, “enormously pleased”, chairman Roger Corbett says, that Hywood accepted the gig as managing director and chief executive officer. “We are in no doubt that Greg is the best person to lead Fairfax Media through the exciting years ahead,” he said. “His experience and knowledge of the sector and the company and his editorial, digital and commercial capabilities made him the stand out choice.”

Hywood will ring in the changes, as Crikey first reported in January. “From today we will be doing it better,” he said in Fairfax’s statement — “more creatively, more commercially, more efficiently and effectively.” Corbett signals the new boss will “be announcing a number of key appointments” in the “near future”.

That will probably include the new post of metropolitan publishing head, endorsed by former chief Brian McCarthy from a structural review last year, while the futures of senior publishing executives Lloyd Whish-Wilson in Sydney and Don Churchill in Melbourne are up in the air and subject to speculation. Mark Day in The Australian also further fuels talk Hywood could look to do a deal to buy rebel Melbourne real estate glossy The Weekly Review, which has done so much damage to Fairfax revenue.  — Jason Whittaker

Munro gives up the fight. Mike Munro may have spent much of his career at Channel Nine serving up a daily (miracle) diet of fashion and food and crooks and conmen and petty squabbles at A Current Affair, but he didn’t enjoy it. In fact, he railed against it, just in case you were wondering. Thankfully he’s on the upmarket Channel Seven vehicle Sunday Night now, introducing stories about ape habitats in South Africa. Or as he declared last night:

“For too many years I introduced stories on another program on another network about neighbourhood disputes and fought against them. But this next one is very different…”

This on the same show that regularly used stripper-turned-presenter Jamie Durie as a “reporter”. We’re not sure Mike can really take the high ground now. — Jason Whittaker

Holes in Overington’s Diary. Sometimes we feel like Caroline Overington isn’t telling us the whole story. Like today, in The Australian‘s Media Diary, where she reports News Limited colleague and News.com.au editor David Penberthy has moved back to Adelaide with “Sydney rent in mind” — we would have thought it had more to do with Penberthy’s new squeeze, Adelaide-based Labor minister Kate Ellis. Or when she reports on Ray Hadley’s decision to quit his short-lived Sky News gig — a show the flame-haired Walkley Award winner effectively co-hosted when it was on air last year.

And one final declaration, if you don’t mind Caroline — what happened to the Media Diary’s Saturday edition? We were left bereft over the weekend… — Jason Whittaker

“My friend’s husband tried it on with me”! Is this agony aunt column really the fifth most important news story of the day, News.com.au? 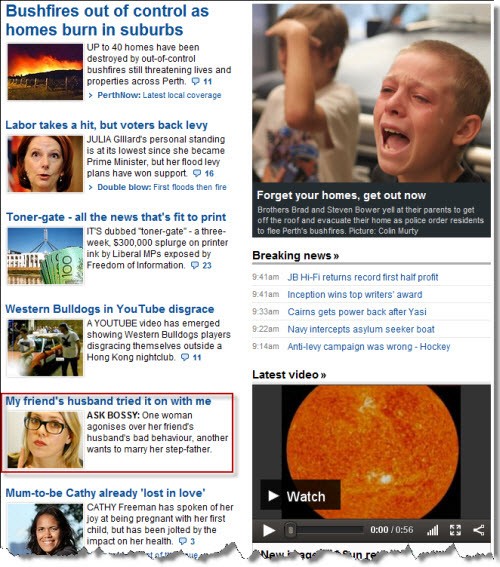 Why Facebook should do more to help Egypt’s protesters

“An image making the rounds features an Egyptian protester carrying a sign that reads “Thank you Facebook” in Arabic. Thanks for what? Facebook has done as little as possible to help Egypt’s protesters. It should do more.” — Gawker

“Super Bowl viewers today will see a commercial for The Daily, News Corp.’s new iPad newspaper, but that doesn’t mean The Daily is suddenly boosting its $30 million launch cost by another $2.8 million to $3 million — the price Fox sought for 30 seconds in today’s game.” — Advertising Age

Why some Twitter posts catch on, and some don’t

“A new study of hashtags offers some insight into how and why some topics become popular quickly online while others don’t.” — New York Times

Rather than your comment on “My friend’s husband tried it on with me” (isn’t picking up on website stories a bit like shooting fish in a barrel?) I thought you were going to comment on the brilliant and very emotive photo captioned “Forget your homes, get out now”. Props to Colin Murty for an excellent shot.

(PS No, not THAT Steve Carey, News Director for Channel Seven, by the way. I’m THE Steve Carey.)

not really an Overington fan, but surely if Whittaker is going to take pot-shots like this about her failures to tell only part of a story, he might declare he has ongoing unresolved issues with ‘Caro’ having blocked him on twitter for what was a pretty ripe (if unintentionally so) comment by him?

Petty & beneath you – leave that stuff to the national broadsheet.