Like most sports, cricket is huge for advertisers, and KFC spends a fortune to get involved: at least $8 million according to industry sources, writes Paul Barry.

No wonder Australians are fat and getting fatter. Anyone lazing in front of the TV watching cricket this summer has been bombarded with ads selling KFC’s or McDonald’s fat-filled fast food.

Commercials for the friendly fried chicken vendor bowled up every five overs during yesterday’s last one-day international on Nine. And viewers of Saturday’s Big Bash final on Fox Sports copped an even bigger serve. KFC’s logo was in absolutely every shot in the televised T20 game — on the players’ shirts, on the stumps, on the billboards round the ground and even on the turf itself.

Pick of yesterday’s ads on Nine was KFC’s Streetwise family meal offering 10 pieces of deep-fried fat-soaked chicken and two large chips for $19.95, which has enough fat for an entire family to get its recommended daily intake in one hit.

Like most sports, cricket is huge for advertisers, and KFC spends a fortune to get involved — at least $8 million according to industry sources. As well as sponsoring Nine’s TV broadcasts, the fried chicken company is one of Cricket Australia’s key commercial partners, for which it gets signage at the grounds, access to the players, naming rights for the Big Bash T20 competition, and the chance to get its message out to cricketing kids across the country.

As part of Nine’s deal with KFC, TV commentators spruik the Colonel’s wares even while the game is being played. Thus we have The Colonel’s Question, which pops up a couple of times in every broadcast, and the KFC Classic Catches Competition, for which the prize is a year’s supply of KFC (to the value of $27 a week). Eat that and you may never move from the couch again.

But this year some of Nine’s commentators have taken another step across the dividing line between ads and editorial by taking part in the commercials themselves. In this ad, which also features Australian fast bowler Doug Bollinger, Bill Lawry and Tony Greig are seen in the commentary box calling the game when a white-suited Colonel Sanders strikes up a tune behind them. 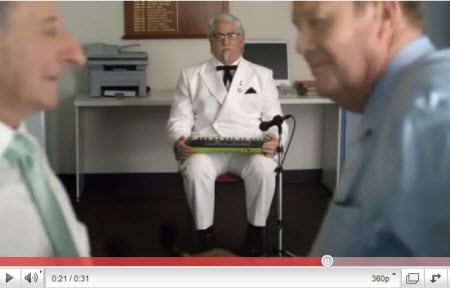 There are no laws to stop this. It’s not cash for comment, because it is obviously an ad. And there have been no complaints to ACMA, the Australian Communications & Media Authority. But I’m not the only one who thinks it’s on the nose.

One of Sydney’s leading admen told Crikey angrily: “It’s an absolute f-cking disgrace. It’s really dangerous when commentators and broadcasters start selling stuff. There’s been more and more blurring the lines recently but this goes further than ever before. Next we’ll have Ricky Ponting down on the pitch telling viewers to pop out for XYZ Popcorn in the tea interval.”

Or perhaps Shane Warne downing a glass of VB in the ad breaks? Oh, sorry, that’s happened way back in 2007. Silly me. 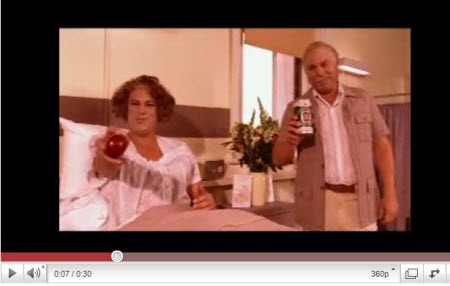 This summer Warnie has been busy selling burgers for KFC’s rival McDonald’s, even though he too is a Nine commentator. And his face has popped up regularly during play, on the sightscreen behind the batsman, partly obscured by a large Macca’s burger and chips.

But almost everyone except Richie Benaud has been roped in to sell something. Former England captain, Michael Vaughan, featured in an embarrassing Betfair ad; Ricky Ponting tried his best to sell truckloads of Swisse vitamins and half the Aussie team pitched in to flog VB and Vodafone. At times there was hardly an ad that didn’t star either the cricketers or Nine’s commentators.

“Companies have absolutely no morals,” Mr Angry Adman continues. “They will get away with whatever they f-cking can, but why do the people who run cricket let this happen? In the long term you destroy the brand.”

The answer of course is money and lots of it. Cricket Australia pulled in $133 million in 2010, up from $115 million in 2009, and will earn even more in 2011, which includes the Ashes tour. Getting cricketers and commentators to barrack for the sponsors keeps the cash flowing. And they’re always trying to find new ways to do it.

This year, Cricket Australia sanctioned a ‘Buckethead’ promotion, in which KFC gave away free hats at televised matches. “This provides another story,” a KFC media minder told Crikey enthusiastically. “The cameras zoom in on the hats and the commentators can talk about them during the game.” Classy stuff.

Does all this shameless spruiking sully Bill Lawry and Tony Greig’s reputation? KFC’s media minder believes not, telling Crikey, “In Britain 30 years ago it was thought demeaning for celebrities to get involved in selling stuff. But there has been a sea change. If it’s the right brand and the right commercial it’s now seen as OK.”

Sure. But is KFC the right brand? And is Colonel Sanders really the right guy to interrupt your commentary? I don’t think so.

But don’t expect it to change. Back in 2008 the Australian Medical Association tried to persuade Cricket Australia to cut its ties with the fast-food company, arguing that its endorsement was feeding the obesity epidemic in Australia. But its pleas fell on deaf ears.

Cricket Australia’s reaction to the use of commentators and sportsmen in these ads is that it’s all pretty old hat and a fuss about nothing — or not very much.

“I don’t think it’s new in the world of advertising, sport or cricket,” says CA spokesman Philip Pope. “It’s not the first time commentators have been used in ads from what looks like a commentary box.”

As to the suggestion that it trashes cricket’s brand, CA says, “It’s just entertainment and I think it’s quite clear that these are ads and not part of the broadcast. In any case, I don’t see how Cricket Australia would be in a position to object to the relationship between KFC and people who are not employees or ours. We do have conversations about these things, but we have no right of veto.”

Hmm. And check out what Pammy Anderson has to say about KFC
http://www.youtube.com/watch?v=PVxv7PPGZqg

Great article! Another shameful situation, which also crosses the line between advertising and editorial comment, is the gambling advertising that takes place in cricket and football codes. Commentators give up to the minute odds and spruik the benefits of the gambling house being promoted and end with the admonition “remember to bet responsibly” – as if this somehow makes it OK.

This came up in conversation the other day and a mate of mine has told me that he is considering banning the kids from watching the footy etc because advertising works!! He told me his 10 year old son said to him during the criocket the other day – “why wouldn’t you bet on that, of course …. is going to win the game. Dad, you should do it to make some money”.

I guess if kids can get the taste for KFC because of the ads they can also get the taste for gambling. Did I read somewhere recently that the gambling turnover in Australia last year was something in the order of $18 billion? Don’t know if this is the case but you could by a lot of KFC for that – indeed you could buy 10 flood levies (touted to raise 1.8 bill)

I believe Paul Barry is a very good journalist, but I do not believe that leaving out the U. in the word Fucking makes any difference whatsoever to its use — we know what he means. I also do not believe that it is appropriate to use that word, it adds nothing to the story and the constant use of that word allows it to become acceptable and in the fullness of time, most people will think nothing of its use.

There must come a time when someone in a senior position says” enough is enough” I’m sure there are other words that are descriptive enough, that are intellectually appropriate to describe the situation. Clearly the word has been used to draw attention to the situation but should it have been allowed?

To the people who promote cricket in Australia and oversee the sponsorship, may I say it’s not only Angry Adman who is disappointed in the direction the game has taken. While I was brought up in the 70s with the MacDonalds promotion of telling the ingredients of a Big Mac to a staff member and you’d get a free poster (which was quite brilliant in its execution I thought), it did not turn me in to an unhealthy eater and I don’t recall anywhere near the saturation of sponsors and childhood obesity wasn’t an issue (fair enough I do recall Benson & Hedges quite well). Given the KFC ads are so horrifically BAD, one would have to wonder whether they’re achieving their aim (my biggest temptation is to encourage everyone I know never to eat their product, ever).

Yes it has damaged the “brand” of cricket with the insanity of such greedy intrusion.

Yes it damages the commentators associated with the game who have been tarnished in my estimation.

Yes I watch and attend far less cricket than I ever have in my life, and I’ll probably watch less next year (if you keep trying to murder this sport). One of my main motivations is to NOT see your tv advertisements which I find offensively DUMB.

I’d be fascinated to see the justification of this being a successful partnership for the players, the commentators, the potentially loyal audience and the game itself. It seems short-sighted and opportunistic at best.

I’m not sure if there is a fight to be had or there is any chance that anyone making these decisions will listen to reason, I’ve sort of resigned myself to the belief that this sport will no longer be part of my life as a result of greed and stupidity which is a great shame.