Gillard, “a substance not style person”, should not change

The very worst thing Julia Gillard could do would be to try and change into something she is not.

Don’t try and change. Even though she is faced with a series of opinion polls showing her government trails the opposition, the very worst thing Julia Gillard could do would be to try and change into something she is not.

The comparisons she is suffering from when pundits evaluate how she and Queensland Premier Anna Bligh should just be shrugged off. The Prime Minister speaks and reacts how she does and it is too late in her life for some drama coach or other to try and make her appear a warmer and more sympathetic person. Better by far to stick being what she described herself as at the weekend: “I’m a substance not style person.”

In the end, the political fate of Ms Gillard and the administration she leads will be decided by what she does or does not achieve rather than by how she says things. For her the most relevant personal characteristic is her gritty toughness she referred to when she noted that she is known for a “feisty demeanour” in parliament.

To win an election a leader does not necessarily have to be liked. Just respected.

Another boring round of leadership speculation. Another Newspoll and another round of leadership speculation. The beat ups that started in Saturday’s papers (see my comment on The Stump) will just get worse and tonight’s Four Corners will push the madness along even further. For my part I am not taking the slightest notice of any of the pollsters.

All quiet on the retail front. The screams retailers have been making about unfair competition from GST free shopping from overseas was a fair warning that the retail sales figures out this morning from the Bureau of Statistics would show times are tough for shop keepers. And so it has proved. 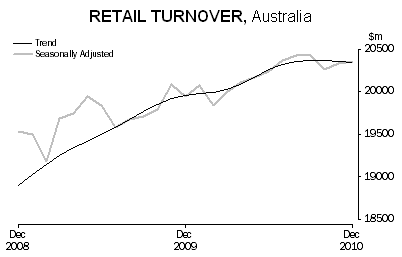 Reminding us of the “make up a misleading quote” man. Memories of Piers Akerman refreshed for me this morning with a wonderful post on the excellent Climate Progress blog.

It takes us back to the mischief caused by the Sydney Telegraph columnist when back in November 2006 he used what he purported to be a quote from Sir John Houghton in a piece criticising the Stern Review, which looked at the economic effects of global warming.

“This alarmist approach reeked of stupidity, snake oil, and misguided gospel preaching but was in line with a formula adopted by the first chairman of the IPCC, Sir John Houghton, who produced the IPCC’s first three reports in 1990, 1995 and 2001 and wrote in his book Global Warming, The Complete Briefing, in 1994: ‘Unless we announce disasters no one will listen’,” Mr Akerman said.

The words have since been used on many occasions by global warming deniers in an attempt to discredit the evidence of a warming world.

As was reported recently in The Independent the quotation now appears on some 130,000 web pages even though Sir John has actually never said or written any such thing. Those like Akerman who claim that it came from the first edition of Sir John’s book published by Lion Books in 1994 have been unable to give a page reference because it is not there. Nor is it in subsequent editions published by Cambridge University Press.

The closest that the denialist industry has come to producing its evidence is this quote from an interview with Sir John published in the London Sunday Telegraph back in 1995:

Houghton warns that God may induce man to mend his ways with a disaster.

“God tries to coax and woo, but he also uses disasters. Human sin may be involved, the effect will be the same.

“If we want a good environmental policy in the future, we’ll have to have a disaster. It’s like safety on public transport. The only way humans will act is if there’s been an accident.”