The battle for Egypt

Crikey wrap: Egyptian president Hosni Mubarak no longer wants to be leader, but fears his country is too unsteady to abandon. But with ten left dead after fighting in Tahrir yesterday, the country is already in chaos.

Egyptian president Hosni Mubarak no longer wants to be leader, but fears his country is too unsteady to abandon. “I am fed up. After 62 years in public service I have had enough. I want to go. But if I resign today, there will be chaos,” he told ABC journalist Christiane Amanpour.

But the country is already in chaos, with 10 people left dead after fighting yesterday in Tahrir Square between Mubarak loyalists and pro-democracy protestors.

“Al Jazeera’s online producer in Cairo said: ‘The battle for downtown Cairo on Thursday has taken on an almost medieval quality, with protesters erecting makeshift barricades and building homemade catapults to launch rocks at each other.

“‘Close-range combat ensued for several hours, with hand-to-hand combat near the barricades erected by pro-democracy protesters. Both sides threw hundreds of rocks back and forth.'”

Al Jazeera is regularly updating a photo gallery on Flickr with photos made available for other media organisations to use. A warning: some of the photos in that gallery are quite graphic… 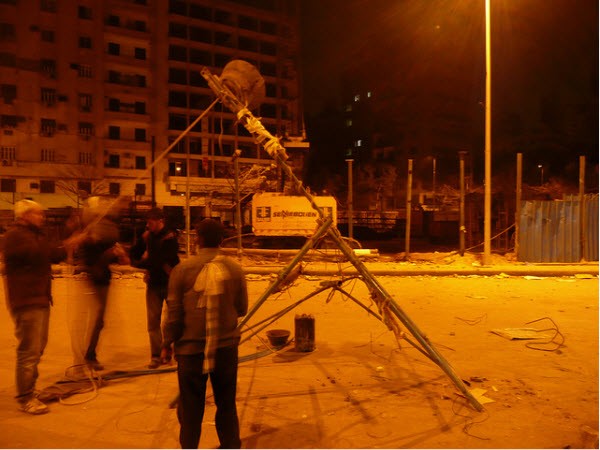 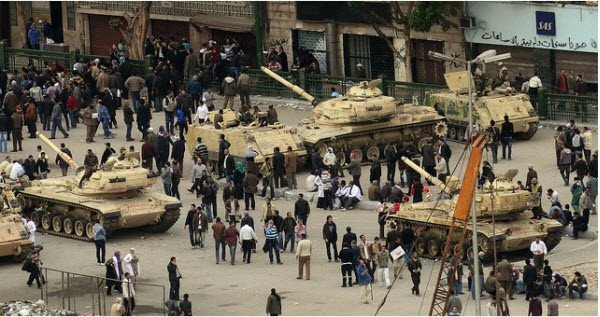 “Foreign journalists were beaten with sticks and fists by pro-government mobs..,” reports Huffington Post. Large numbers of journalists and human rights activists were arrested, including three Al Jazeera reporters who were arrested and later released. An Australian ABC reporter and his Foreign Correspondent crew also report being attacked. The LA Times reports:

There is now a “tense calm” in Tahrir Square.

“I do not want to see Egyptians fighting each other,” Mubarak told Amanpour, but he also feared that if he immediately resigned the banned Muslim Brotherhood party would take control.

Egypt’s vice-president, Omar Suleiman, told Amanpour that protesters had “legitimate grievances”, but that the government believed it had met requests and would not tell armed forces to attack demonstrations. “We will never authorise force against the people,” said Suleiman.

US president Barack Obama suggested Mubarak needed to engage with protesters, and should leave before September. “Obama is a very good man, but I told Obama ‘you don’t understand the Egyptian culture’,” he said.

So Mubarak has now admitted the reality of his position…the former head of his security services, now his vice-president, is running the country and if Mubarak steps down now, the crackdown by security forces will reduce the country to chaos. This is a message to both the US and Israel to act now to shore up his government or the repercussions of chaos in Egypt could be profound for the entire region. The best result for Egypt at the moment would be for Mubarak to step down, allow the formation of a government of national unity and declare elections for three months time. However, if he is now just a puppet of his vice-president, as it now appears, the opportunity for a peaceful resolution may be past.

A text message received Sunday by an Associated Press reporter in Egypt appealed to the country’s “honest and loyal men to confront the traitors and criminals and protect our people and honor.” Another urged Egyptians to attend a pro-Mubarak rally in Cairo on Wednesday. The first was marked as coming from “Vodafone.” The other was signed: “Egypt Lovers.”

In a statement, Vodafone Group PLC said that the messages had been drafted by Egyptian authorities and that it had no power to change them.

Mubarak’s creating a self fulfilling prophecy of chaos by calling on his thugs to engage in confrontation against the protestors.

As for Vodafone, its a classic case of the profit motive overruling any motive to act ethically. Ayn Rand would be proud.

Chairman M. (Mao/Mubarak):
“Everything under heaven is in utter chaos: the situation is excellent.”

Looks like dominos across the region, then we will have issues

Astro: “Looks like dominos across the region, then we will have issues”

Who are “we” that will have issues?

I can’t think of anything better than “dominos across the region” if the dominoes take the form of a popular uprising against entrenched and installed dictators.