Queensland is being sacrificed to Australia’s and the world’s unwillingness to take global warming seriously.

Queensland is being sacrificed to Australia’s and the world’s unwillingness to take global warming seriously.

Like the floods, the fearful intensity of Tropical Cyclone Yasi is probably due to the effects of global warming. Yasi has been intensified by the unusually warm sea-surface temperatures of the Western Pacific, warmth that provides the energy and moisture that made Yasi so terrifying, with the combined effects of tempestuous winds, torrential rains and a storm surge.

Last night Professor Ross Garnaut, currently revising and updating his 2008 climate change review for the Gillard government and the multiparty climate change committee, delivered a speech in Melbourne in which he stated that since his 2008 review, the scientific evidence for global warming had become stronger.

Cyclonic events are likely to become “more intense in a hotter world”, he said, and since we are just at the beginning of the warming process “you ain’t seen nothing yet.”

To say so is not insensitive, is it not irresponsible, nor is it political. It is simply a statement of the bleeding obvious, at a time when we should be most attuned to it.

The Bureau of Meteorology have said that we have to go back to 1918 to find a cyclone as big as Yasi in Queensland. We would also have to go back to the early 1900s to match a December sea-surface temperature of 1.2°C above the long-term average in the seas beneath Yasi.

It is those seas, warmed by the enhanced greenhouse effect, that drove Yasi, just as they supplied the moisture for the rains that, on top of La Niña, swamped the state over the Christmas-New Year period. 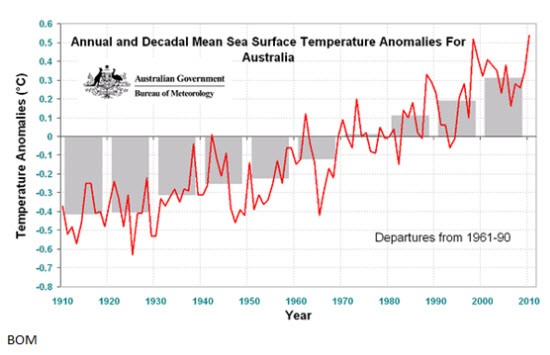 Dr Kevin Trenberth of the US the National Centre for Atmospheric Research explains what is happening globally:

“[T]here is a systematic influence on all of these weather events now-a-days because of the fact that there is this extra water vapor lurking around in the atmosphere than there used to be say 30 years ago. It’s about a 4% extra amount, it invigorates the storms, it provides plenty of moisture for these storms and it’s unfortunate that the public is not associating these with the fact that this is one manifestation of climate change. And the prospects are that these kinds of things will only get bigger and worse in the future.”

Climate Progress quotes “uber meteorologist” Jeff Masters on the equal hottest year on record, at the end of the hottest decade on record:

“I suspect that crazy weather years like 2010 will become the norm a decade from now, as the climate continues to adjust to the steady build-up of heat-trapping gases we are pumping into the air. Forty years from now, the crazy weather of 2010 will seem pretty tame.”

Despite the strong science connecting global warming to extreme events in this country — the Queensland and Victorian floods, cyclone Yasi, the Victorian fires and the long drought — Australians don’t really want to know.

It’s not just that those who make the link with climate change are shouted down as insensitive or exaggerating — although there is plenty of that sort of outright denial around — but that ordinary Australians would rather focus on the awfulness of the tragedy and the adequacy of the emergency response than talk about the causes.

”All the measurable impacts are tracking right at the top of the range of possibilities … or in some cases above them … there is no major area, unfortunately, where sceptical views of the science can draw any strength from the peer-reviewed science, the real science, that has been done in the past five years — all of the evidence appears to be in the other direction.”

There is, as always, an alternative view, spouted by commentators who don’t let the fact that they don’t know what they’re talking about get in the way of their theories:

Piers Akerman today on the link between extreme weather and climate change:

Those who choose to live and work in tropical Australia, be it Queensland, WA or the Northern Territory, well know what comes with the turf.

Cyclones, floods, crocodiles, poisonous snakes, lethal jellyfish. This is the sort of wild stuff that sends shivers up tourists’ spines and sells books for Bill Bryson.

It is not new however. None of the creepy-crawlies or the smashed homes can be attributed to climate change.

How much damage does the state of Queensland, or the nation as a whole, have to sustain before we take climate change seriously?

*Clive Hamilton is professor of public ethics at Charles Sturt University. He is based in Canberra.

No doubt Clive will be howled down in a similar manner to the attacks on Bob Brown but that’s okay – both are pointing to a very uncomfortable truth.

We are living now with the effects of climate change and it is time we, weakly and self-indulgently, stopped ignoring the realities that are bearing down on us. Our economy and society needs to embark on large scale reform in an effort to beat the threat. Only then will we be able to stand on the world stage and get other countries to embark on their own transformations.

Indded! And who takes any notice of Piers Ackerman? I find him repugnant to human decency, on many levels. I don’t read his articles, I don’t watch him on TV. He’s so predictably vile, that he’s not worth watching? Nor is his mate, Andrew??

The climate change denyers will be the loudest to scream when we reach that point too far. That’s if we haven’t arrived there already! If just one person would ask Piers A and Andrew B, where they achieved their scientific qualifications – it would be great! They just quote the international denyers, many of whom also worked for tobacco companies, who denied that smoking was injurious to health! We all know how contemptible those people were then – they’re the same or worse now!

Are you even dafter than Hamilton? “Only then will we be able to stand on the world stage and get other countries to embark on their own transformations.” Who are you kidding. It didn’t need the Copenhagen fiasco to demonstrate that the pipsqueak voices and inevitably tiny physical actions from a country of 22 million people are not going to count when the rulers of billions of people, especially in developing countries, seek to maximise their countries welfare.

From today’s AFR letters “US President Obama’s 2011 State of the Union message indicated that neither an ETS nor a carbon price were on the US’s climate agenda but that nuclear power was; and that the latest projections by the World Energy Organisation show China’s emissions of greenhouse gases as being twice current levels by 2030.”

Also, and this applies especially to Hamilton’s latest effusion…

From a meteorologist friend:

“Overall the tropical ocean surface temperature during January 2011 was slightly cooler than average (Source: US Department of Commerce, National Oceanic and Atmospheric Administration).”

While we know there has been a lot of warming of the earth’s atmosphere, and, probably, ocean during the last 250 years and that CO2 is almost certainly contributing something extra with or without feedback from water vapour effects and cloud albedo, and we can also believe that warmer oceans may add energy to the tropical storms that, nonetheless are not unprecedented in their force since CO2 began to rise significantly, it doesn’t follow that we should be so naive as to take the self-interested statements of Munich Re and other reinsurers as gospel – let alone the scientists who beaver away in small corners of the vast complex whole.

Probably need a few more than one to make a claim like this… yeah yeah yeah i know, floods, cyclone Larry. But I’m willing to take it all back if there’s yet another category 5 of the same intensity that hits Queensland in a few years… better 2 or 3 more because then you have a trend and some substantiated facts rather than predictions. No matter how reliable the source, they’re still preditions and don’t replace solid facts. Once cyclones of this size become a seasonal norm you can more confidently make a statement like this. Until then you’re preaching to the choir.

Yes, personally, I know that something should be done now and we take steps that appropriately insure the future of our nation’s resources like an individual might insure their home, income or life. But to anyone other than the converted this will look like unsubstantiated hyperbole. Which is a real shame because this sort of article makes it difficult to have a rational discussion about climate change simply because of the “incoherent outrage” it provokes.

Contrasted with the Garnaut article in the same edition of Crikey, this is the stuff of tabloids.