For a volunteer group and charity, suspected Scientology influences never play well. Neither do revelations of lax paperwork. But when both of those details combine -- and you work in immigration detention -- well, you’d better hold the front page.

For a volunteer group and charity, suspected Scientology influences never play well. Neither do revelations of lax paperwork. But when both of those details combine — and you work in immigration detention — well, you’d better hold the front page.

And so it was for the Australian League of Immigration Volunteers (ALIV), a group recruited by Serco to help run English classes, recreational activities and special needs programs in detention centres.

ALIV founder Gary Taylor says that his group provides about 140,000 volunteer hours per year for programs in detention centres. The group’s programs on Christmas Island and in Darwin detention centre include yoga, games and English classes — activities designed to stave off detention depression.

Last month ALIV was the subject of a front page exposé in The Sydney Morning Herald, revealing that the group had was on the brink of being deregistered by Fair Trading after they failed to provide financial statements. 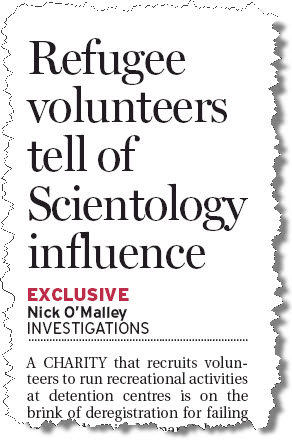 To add salt to the wound, Taylor’s past dabblings in Scientology were dragged up and provided as a possible motive behind the group’s methods. The group was subsequently dumped by Serco as a provider of supplementary activities in detention centres.

A spokesperson for Serco told Crikey that ALIV had finished up as a result of its “regular reviews” of volunteers at its centres. They said that there was no contract with ALIV. Taylor told Crikey that this was not through any lack of trying on the part of ALIV.

Taylor doesn’t deny the paperwork snafu — he says the group weren’t aware of the form or the obligation to submit it and that they are rectifying the error — but he does take issue with the Scientology angle. He says his involvement with the controversial religion occurred more than a decade ago, well before the founding of ALIV, and since his departure he has had ceased all involvement.

As well as grants and donations, ALIV rely on funding from Serco to help provide for volunteer’s living expenses. Taylor says the last eighteen months have seen his group invoicing Serco for almost a million dollars in costs. Serco are contracted to offer one program before lunch and one program after lunch, Taylor said.

“ALIV thought that was nowhere near enough, so we created a program that produced 15 times that,” he said.

A report released yesterday by the Commonwealth Ombudsman on the detention facilities at Christmas Island found that activities like the ones run by ALIV have been promoted by DIAC and Serco as “important in maintaining morale and ameliorating detention depression”.

According to Taylor, ALIV are the main volunteer group offering these activities. He says other charity groups have been brought on to offer similar services, but have struggled to offer the same amount of programs.

“There are not many people in Australia that can run volunteers of this size on volunteer management,” he said. “To do it any other way on this scale would cost tax payers millions.”

DIAC also clearly value the work of ALIV. In its response to the 2010 Australian Human Rights Commission Report on Immigration Detention on Christmas Island they said that classes were often dependent on the available skills of the ALIV volunteers. ALIV volunteers would be flown to detention centres on DIAC charter planes.

Taylor says that reports of the group’s work have typically been positive. He reckons that detainees value the programs that ALIV run, especially as they face the potentially long haul of indefinite detention:

“The program was awarded a humanitarian award by the Red Cross and the NSW government awarded me the 2006 volunteer of the year award for the project and the breakthroughs we were creating in volunteer management.”

Taylor does not want to criticise Serco or DIAC. He says that they are trying their best in a difficult situation. But he is also concerned that potential volunteers will miss out on a valuable experience.

A spokesperson for DIAC told Crikey that the actions of volunteer organisations were the responsibility of Serco.

“The department is aware that Serco facilitates supplementary activities, through volunteer organisations to complement detention services provider programs and activities provided for under the contract. It is the detention service provider’s responsibility to manage volunteer presence in immigration facilities.”

CORRECTION: An original version of this story said that ALIV were recruited by Serco and DIAC. ALIV were solely the responsibility of Serco.

ALIV should not collaborate with SERCO and if conditions are “difficult” for SERCO I would be surprised because they make a packet out of this moron government who just don’t get that we don’t need to waste $1 billion per annum jailing completely innocent human beings for not having a visa that they don’t have to have.

SERCO is setting the benchmark of integrity?

Is this just unbelieveably cock-eyed? Serco get paid by the government to run a service on behalf of Government. The rationale is that contracting out is ‘more efficient’ than it is for the Government to run this service. In order to run the service Serco contract ALIV to run necessary programs and ALIV provide unpaid labour.

No wonder it’s more efficient – imagine not having to pay all those people!

Marilyn, you let them off the hook too easily by calling them morons.

Who has filled the gap now that ALIV have been pulled out?
DIAC need to hold SERCO accountable and ensure they are providing adequate recreational and educational services for those in detention!