‘Death to Mubarak’ is extreme: just let him finish packing

This morning is quiet again in Alexandria: the fishermen are casting their nets in the harbour, street vendors are selling burnt corn and cars are whizzing up the Corniche on their way to work. Or what’s left of it. But the worst may be yet to come, writes Vickie Smiles. 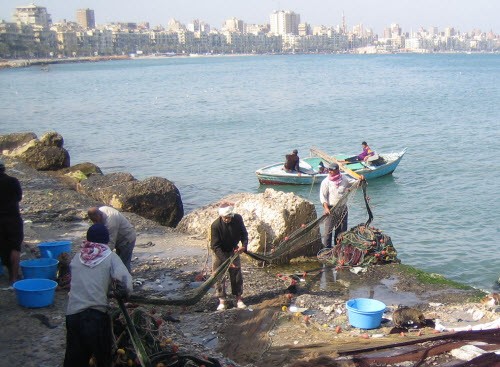 This morning is quiet again in Alexandria: the fishermen are casting their nets in the harbour, street vendors are selling burnt corn and cars are whizzing up the Corniche on their way to work. Or what’s left of it.

During the night, the vigilantes (our neighbourhood watch) kept us safe and at one point played football to ease the boredom of protection. A police vehicle was stopped at the blockade and kept waiting for 20 minutes while the car was searched over and over again. Payback for sure — but mischievous not violent.

The streets behind many of the shops are closed, some with signs on the door supporting Mubarak. Not surprising when you consider that before the protests began their livelihoods were more or less secure. Better the devil you know.

There’s torched cars again this morning and the police command post at the tram station looks ever more forlorn. 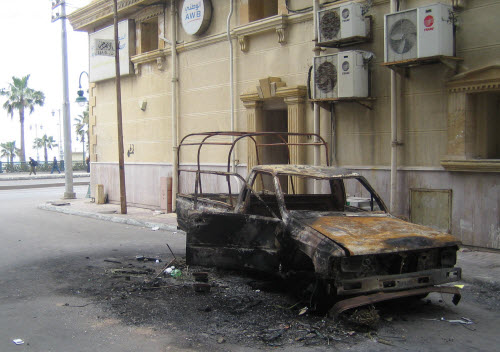 We’re free of curfew until 5pm so I can go out and explore, buy some fresh supplies and soak up the beautiful sunshine of Alexandria. I watched the fishermen for a while earlier and then pushed past the line-up of horses and carriages. “Half price to the Citadel,” said one. “Just 10 minutes,” said another. How brave they are. They ask me every day and I’m almost tempted this time, just to show support, but I just can’t bring myself to battle the traffic on four legs.

Of course the horses are used to it as they almost dance their way into three lanes of unrestrained drivers, hooting and tooting as if noise was their fuel. They step, nudge, sway and gently thrust their shoulders further into the melee: so graceful and never flinching at sudden or erratic movements. At rest they shove their noses into bags of fresh feed.

My hotel-haven is called the Union and there is now more staff than guests. Only five of us left: a Spanish traveller called Luis; an American pocket-rocket called Irene, who lives in Greece but desperately wants to call Alexandria “home”; a professor of biology; and, an Egyptian share trader taking refuge from his abandoned apartment block uptown.

“The market’s down 20%,” he lamented at breakfast. “But I sold out before the protests.”

I used to have a minimalistic room, with a kettle, some tea and coffee and a cooler box of necessities. But as each person departs they deposit their leftovers at my door.

“Here’s some mashed potato,” said Mariass, a bus driver from Nice; “just add milk.” “Take what you like and give the rest away,” said Zuhdi, a Jordanian/American national from Dubai, leaving with regret after a four-year masters at Alexandria University. Everybody offers something special, even an insight that only discarded possessions can reveal.

Venturing further afield this afternoon, we discover our nocturnal vigilantes directing traffic: baton in one hand, whistle in the other.

No sign of pro-Mubarak protesters on duty. Hopefully they were listening to Egypt’s new Prime Minister, Ahmed Shafiq, who apologised for last night’s violence in central Cairo, which left five people dead and hundreds injured: “As officials and a state which must protect its sons, I thought it was necessary for me to apologise and to say that this matter will not be repeated.”

We keep walking in search of a hot meal or even a fresh salad from McDonald’s, but everything is boarded up and the Vodafone dealer next door is trashed. We take solace at Patisserie Delices, which has been offering pure indulgence for almost 90 years. “Let them eat cake,” we thought, tucking into chocolate gateaux. Lips to hips, who could blame us.

One final look at the harbour before curfew and I’m shocked to see some graffiti on the sea wall that wasn’t there this morning. “Death to Mubarak,” it said, but I feel certain that most Egyptians would prefer he just finished packing.

Tomorrow will tell as the mother of all protests is promising a march on the Presidential Palace.

Thanx for this: a very nice postcard.

Ah yes, thank God we live wild and free in the lucky country of Australia and not in the strife torn Middle East with its cruel and corrupt dictatorships. (sarcasm mode engaged)

Below is a link to a rather chilling example of repression of Free Speech in Australia. This should be of great concern to any who claim an interest in Civil Liberties and Personal Sovereignty. Due to the favoured and privileged status of the claimed ‘victims’ in this case do not bother holding your breath waiting for Amnesty International or Geoffrey Robertson QC to rush to assist Brendon Lee O’Connell.

There is much more to this affair than meets the eye. The charges and Court Case themselves are almost incidental. They are something of a smokescreen for far more serious misconduct and treachery among our Government, Police, Judiciary and Military. At its core are matters of Australia’s disadvantageous relationship with Israel, its military ‘security’ software contractors and our National Security.

Once one has studied the FULL details of this case it seems somewhat ironic that the Egyptians currently appear so desperate to bring the ‘great gift of Democracy’ to their own nation. It puts one in mind of the old joke about the Irish turkey and how he was ‘looking forward to Christmas’ or the adage of ‘Be careful what you wish for…’

[“Death to Mubarak,” it said, but I feel certain that most Egyptians would prefer he just finished packing.]

Or perhaps he ought to be put on trial at The Hague Charles Taylor-style, for crimes against humanity. I’d like ringside seats at that.

There can be no doubt that he would have a vast knowledge of organised crime in Egypt and he of course has the blood of many on his hands. His torturers worked hand in glove with US extraordinary rendition programs and locally, re ruled by terror and coercive fraud.

He should not be killed or tortured, but he should be called to account, humiliated in public and then locked away in dignified silence remote from Egypt for his remaining days as a cautionary tale to others of his bent.