The aftermath of Yasi

The full impact of cyclone Yasi will be revealed this morning, as north Queensland wakes up to examine the aftermath of a category five cyclone. Initial reports indicate damage isn't as bad as originally feared, but thousands have been left homeless.

The full impact of cyclone Yasi will be revealed throughout the morning, as north Queensland wakes up to examine the aftermath of a category five cyclone. Initial reports indicate damage isn’t as bad as originally feared, with no reported deaths or serious injuries, but several thousand people are expected to be left homeless after severe property damage.

Towns of Innisfail, Tully, Mission Beach and Cardwell bore the brunt of the storm, while Cairns and Townsville seems to have escaped most of the expected cyclone damage.

Yasi crossed the coast as a category five cyclone around midnight, right at Mission Beach. Early this morning it was down grounded to a category three and it now sits as a category two storm.

Premier Anna Bligh warned that the early positive reports of no deaths and no serious injuries doesn’t mean that there weren’t any and not all rural communities have been accounted for.

“While the early news is certainly not anything like I expected to hear this morning from a category five cyclone, I do stress in many places we’ve yet to see any assessment… it’s far too early to start talking about dodging bullets,” she said this morning.

Currently 175,000 people south of Innisfail are without power. Emergency services will attempt to assess the worst hit areas today. A second, smaller storm is due to hit north Queensland at 9am today.

The ABC is running a brilliant liveblog for those wanting constant updates.

“Yasi is moving inland and weakening slowly, but remains a dangerous cyclone,” says Bureau of Meterology reports. The latest cyclone tracking map shows the latest movements of the storm: 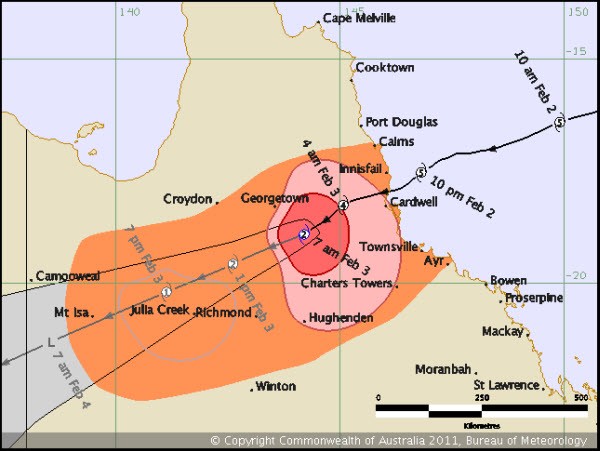 The ABC has an interesting article about how farmers and their livestock and crops — including barramundi, trout and sugarcane — were coping with the cyclone.

And the feel good story of the morning: the birth of a baby girl in a Cairns evacuation centre this morning. No, she won’t be called Yasi.

“Police who conducted minimal patrols during the tempest say damage appears to be minimal.

‘There’s no major structural damage, just vegetational,’ a spokesman for Cairns Regional Council Mayor Val Schier said. ‘We just heard reports that one garage door has buckled indoors from the force of the wind.

‘But we’re sure there will be more in the morning.’

Power is out across parts of the city, including at evacuation centres.

Samantha Healy, a Courier-Mail journo bunkered down in a Townsville hotel says the storm surge didn’t seem as bad as predicted. She reports:

“Some suburbs have lost power and water and hundreds of trees are down.

Courier-Mail photographer Adam Head and I have now been holed up in our hotel bathroom at Rydges Southbank near the marina since 3pm yesterday.

We have been told we may still be here at lunchtime today and our only outside contact is via social networking sites, SMS and the occasional phone call.

At the time a storm surge was imminent but from our balcony this morning it had appeared that the marina precinct, at least, had escaped inundation from the sea.”

There’s been much vegetational damage near Innisfail, according to ABC reports:

“Cassowary councillor Bill Horsford took refuge on his farm near Innisfail and says daylight has revealed a devastated landscape.

‘It’s just like the place has been sprayed with napalm, there’s hardly a green leaf around, all of the beautiful mountains are now brown,’ he said.”

Powerlines are done and property has been damaged, but it’s too early to say exactly how severe the damage is, as residents have been unable to fully examine the town. According to an AAP report:

“Police who endured Yasi’s fury in the town that took a direct hit say trees had been reduced to sticks, streets were littered with debris, and some buildings had been damaged.”

The entire town of Cardwell was evacuated before the storm hit, the first time that’s happened in the town’s history. But severe property damage is expected.

“The only thing that separates the beach from the main drag, and the town’s homes, is the Bruce Highway. There’s simply nothing to stop the up to seven-metre storm surge Yasi’s expected to send into the town,” reported Petrina Berry in the Sydney Morning Herald yesterday.

The town of Tully was hit hard, with “roofs torn from houses and power poles knocked over. A resident reported several houses in her street being ‘ripped apart’,” reports the Cairns Post.

Last night the Cairns Post facilitated a live feed blogg and twitter blogg trying to answer as many questions as possilbe and pooling all Iphone twitter updates from those being torn apart as it was happening. As far as could be found it was THE only way anyone had any idea what was happening for about two hours.
It was horrific to read.
The worst was as the eye came over and the calm came pple saying in relief that it has gone and was not so bad, only to come back in total shock at being whipped by the tail of Yasi.
We will still need to do a body count as it will be those isolated most at risk.