While some of the pro-forces are clearly legitimate, there are genuine fears that many are government stooges, perhaps even paid to destabilise the country, writes Vickie Smiles, from the Egyptian city of Alexandria. 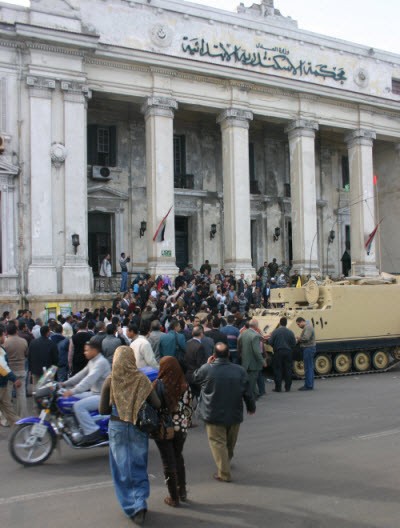 Lawyers demonstrating outside the Alexandria courthouse.

Pro-Mubarak demonstrators have taken to the streets for the first time since nationwide protests began 10 days ago. A small group passed by my hotel this afternoon gathering numbers as they moved up Alexandria’s famous harbour-front Corniche.

Their emergence follows the President’s speech last night in which he promised to step aside at elections in September. Mubarak’s words satisfied many, particularly poorer Egyptians struggling from week to week on meagre incomes, often less than the minimum wage. Unless businesses return to normal within the next few days they won’t have enough money to buy food.

While some of the pro-forces are clearly legitimate, there are genuine fears that many are government stooges, perhaps even paid to destabilise the country. Orchestrated or not, pitched battles between the two, beginning in Cairo this afternoon, have ruined any hopes that peaceful protests might continue.

Even this morning there was a sense of normalcy in Alexandria when fisherman returned to the harbour.

Mubarak’s speech was only his second since the protests began in A Day of Anger, on January 25. Standing defiant and proud he said he would “die in Egypt”. No running away like Ben Ali of Tunisia!

This Friday’s demonstration, rumoured to be a march on the Presidential Palace, was supposed to be the last but today’s emergence of pro-Mubarak protesters has totally changed the dynamics of resistance.

Mubarak also blamed protesters for creating chaos and violence when he spoke last night and while some were to blame, nothing could be further from the truth. By denying Egyptians the ability to communicate, first by removing Facebook and Twitter, then the internet and mobile phones, Mubarak alone forced more and more people onto the street.

Mobile phones have been working since last Saturday but SMS or text, the cheapest form of communication for ordinary Egyptians is still impossible, thus ensuring the street remains the country’s most effective information super highway. The internet was only switched back on this afternoon: just in time for news of the pro-Mubarak supporters to receive as much publicity as possible.

Mubarak also took the much-despised police off the streets last Friday after massive protests rendered them useless and afraid. If this was a deliberate act to fuel civil unrest it didn’t work.

Burnt our police trucks and command posts remain graphic evidence of the violence of some protesters but there were just as many if not more willing to protect the police from injury, especially the young ones.

I witnessed one group of terrified policemen captured and loaded into a mini-bus, which drove around and around through the protests yelling about their victory. Eventually they stopped and held a conference about what to do with the terrified individuals but sanity prevailed and the majority agreed to let them go. Civilian clothes were found for them and they scuttled home. Protesters then brandished their plastic shields and batons in victory.

Other acts of kindness saw policemen pushed into apartment buildings where doormen took their uniforms and gave them something else to wear. They were also given water to alleviate the horrible effects of tear gas that, minutes ago, they’d been firing on the same protesters willing to save their lives.

With police off the streets and the army sent in, largely to protect infrastructure, the protesters also took on the role of vigilantes to safeguard their neighbourhoods from looting. With many jails emptied, either by cunning or intent, escaped prisoners were also a problem for fearful residents.

Each night since the police were removed the vigilantes have been manning barricades on almost every street corner, demanding proof of identity and searching each vehicle. That drivers would willingly subject themselves to strangers bearing batons, hockey sticks, knives and fearsome looking planks of wood, is testimony to the co-operative and peaceful nature of millions of Egyptians: the very same people Mubarak is blaming for chaos.

A couple of nights ago I was woken by about 50 vigilantes screaming in the street below my hotel room on the fifth floor of an all purpose building. When I went out onto the balcony I was shocked to see them all pointing upwards.  The couple in the next room had opened their window and they thought the woman was under threat. She shouted that she was OK but they misunderstood, called in an army tank and asked for assistance. The doorman was persuaded to unchain the gates to the building and a soldier came upstairs to check that everyone was safe.

This has been our life ever since civilians took on the role of the police and the army stood by in support. Mubarak and his supporters have also raised the possibility that “Islamic” forces are behind the protests, but again there is little evidence that this is true.

“Bread, freedom and dignity” chanted a group of lawyers demonstrating outside the Alexandria courthouse last night. That’s what most Egyptians want, not chaos. 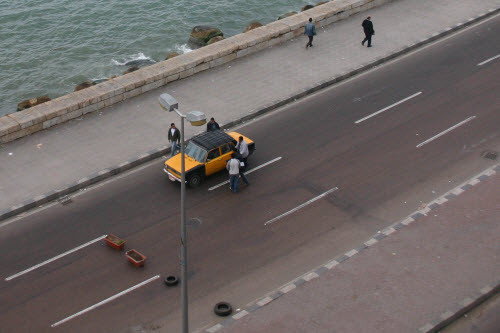 Checkpoint on The Corniche.

The democratic beats of the Egyptian street