New allegations have emerged on just how insidious phone tapping was at the News of the World, as one of News Limited's senior Australian lieutenants suggests editors should have known the practice was going on.

New allegations have emerged on just how insidious phone tapping was at London tabloid News of the World, as one of News Limited’s senior Australian lieutenants suggests editors should have known the practice was going on.

A Press Complaints Commission investigation cleared executives and editors of playing any part in the ongoing scandal, sparked by 2007 revelations that the paper’s now-jailed royal editor Clive Goodman hacked into telephone voice messages of celebrities. But in an apparent diversion from the firm News Limited line, Neil Breen, the former sports hack turned editor of Australia’s biggest-selling newspaper, Sydney’s Sunday Telegraph, says editors know when journalists are up to no good.

“Honestly, I’ve looked at the editors over there and a lot of them say they didn’t know about it, I look at it and I go ‘gee, if people on my staff were phone tapping people I’d know about it’. I just would as editor. You get a good instinct for where journos are getting stories from and how they’re coming across their information,” he told Tim Burrows in a video interview for the mUmBRELLA website. 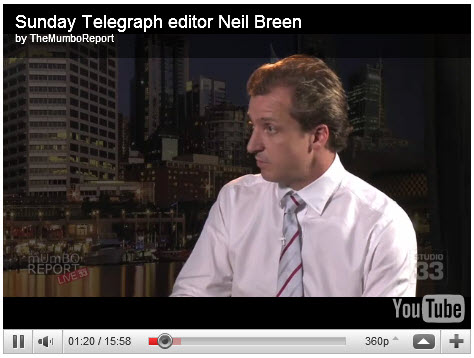 The scandal continues to dog News Limited. Newly disclosed High Court documents released today show phone hacking was allegedly used by the News of the World to obtain a “kiss and tell” story even after rival papers got the story via more traditional means. Nicola Phillips, who was employed by publicist Max Clifford, is suing the tabloid claiming her voice mail was illegally accessed in 2006 to mine information on actor Ralph Fiennes and singer Cornelia Crisan. The Independent reports:

“The alleged hacking, which it is claimed allowed the NotW to print a similar story to that only obtained by the Sunday Mirror and The Mail on Sunday after paying Ms Crisan some £35,000, is the latest evidence that the practice was used to monitor the activities of journalists and publicists, as well as public figures and celebrities.”

NOTW associate editor Ian Edmondson has been named a co-defendant in the case. He was sacked last month after it was revealed he was linked to a private investigator. Former editor Andy Coulson was also forced out of his high-profile post as Prime Minister David Cameron’s communications chief after being dogged by the scandal.

An apparently “frustrated” Rupert Murdoch was in London late last week to deal with the ongoing crisis, according to The Guardian, amid concerns the flack could derail News Limited’s bid to swallow the remaining 61% slice of pay TV broadcaster BSkyB it doesn’t already own. Murdoch is reportedly unhappy about how the London-based division of News, led by son James and newspapers chief Rebekah Brooks, has handled the revelations:

“Internal critics, meanwhile, accuse James Murdoch of being slow to engage with the hacking saga — leaving the company trapped in a policy of outright denial because he was so focused on the bid for Sky — while Brooks wants to be seen to be getting on top of it by demonstrating willingness to investigate new evidence that emerges from cases against the News of the World (NoW).”

Watching on from Australia, Neil Breen blames the hyper-competitive London newspaper market and the willingness of local papers to pay for stories. It’s a lesson Breen learnt in 2009 after he ran front-page photos of a scantily clad Pauline Hanson later proven to be fake. He admits he was too “gung-ho” and failed to do basic checks.

“One real positive we have on newspapers in Australia is we don’t pay for stories,” he told mUmBRELLA. “And that was the mistake I made with Pauline Hanson ’cause … we buy photos, but what I did with Pauline Hanson is I bought more than a photo, I bought a story and that was where that whole business fell apart. I think that culture in the UK led to that trouble.

“Mistakes are OK, and mistakes are OK to make as long as you learn by them. I think personally it’s made me a lot better editor. It made me a bit less gung-ho; I was very gung-ho and I sort of in my sights I had objectives and things for the papers and I didn’t do the proper basics of journalism for that story. I sort of said ‘yep, let’s just go for it’; we got those pics on a Saturday morning …

“And I think I paid a price for it. The paper didn’t really because I think we handled it well during that week. I didn’t get any pats on the back and there was a lot of media commentary on what should happen to me and I wasn’t even disciplined, well no one outside of News Limited what I went through inside of News Limited.”

Breen wasn’t asked to resign in the wake of the incident. To date, only Edmondson has been marched from the company in London.

One thing that Harto told me in that week was he said, he goes ‘this is the way it’s going to be if anyone is going to prove those pictures were indeed a fake it’s going to be you. So I said that’s what we’ll do.

So how much is Murdoch and Limited News paying these “editors”, “not to know what is going on in their own establishments” – to not do their “job”? And still not be sacked?

Cleared by the PCC? Very, very, very disappointing fellas. And not a good look for self-regulation.

Surely the worst aspect of the fake photo fiasco is that, IF they had been the person alleged, SO f**#*ing WHAT? So Breen’s judgement on the time of day is suspect.

What rubbish from yet another murdoch hack toadie. all he’s doing is spinning for uncle rupert.