There are easier ways to make a fistful of dollars. The Daily isn't it. Given the recent stats on iPad app sales, no one could seriously believe it’s just the money.

There are easier ways to make a fistful of dollars. The Daily isn’t it.

“New times demand new journalism,” Rupert Murdoch said on stage at the Guggenheim Museum in Manhattan before an audience of reporters, employees and advertising partners as he launched the world’s first iPad-only paper (it’s really more of a magazine.)

What’s the motivation at play here? Given the recent stats on iPad app sales, no one could seriously believe it’s just the money.

Condé Nast sells about 22,000 downloads of Wired each month. That’s down from a debut of 31,000. Glamour, meanwhile, sold 2775 in November, losing 20% a month from the prior two months (even as iPad sales rocketed).

Yet Murdoch — or more accurately, News Corp — has sunk $30 million into this venture, employed a team of 100-plus journalists who will produce up to a hundred new pages a day, and slapped the app with a 99 cents a week price tag.

Buzzmachine‘s Jeff Jarvis has been crunching the numbers on what The Daily needs to do to hit cash-flow break-even. Remember: Apple is taking more than the 25% share of the revenues. He reckons roughly 34 times the sales of Wired. “But it is daily and not monthly,” Jarvis adds.

You can’t doubt Murdoch’s commitment to cracking the online code. He takes a hit like the catastrophic MySpace project, he gets up again. Meanwhile, The Times‘ UK paywall experiment is just that, an experiment (that doesn’t appear to be doing so well…).

But if it wasn’t for this guinea pig, and stupid/visionary (take your pick) projects like The Daily, we’d be in the dark as to whether platforms like the iPad will convince people to pay for general news online. 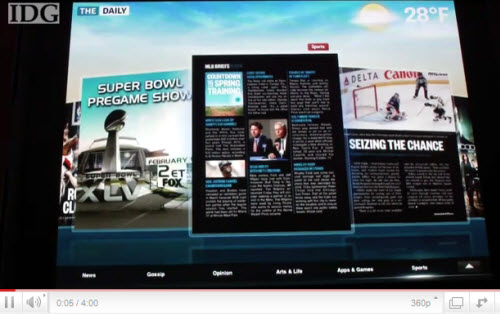 Beecher: Exhilarating iPad will help kill newspapers, not save them

I think Murdoch’s got the Disam touch for the internet. Everything he touches turns to glod.

Crikey appears to be adopting an increasingly gleeful approach towards the failure of Murdoch’s online media to make a buck – witness the gloating in this editorial – while consistently bemoaning the failure of old media and the decline of journalism standards.

It’s getting more and more difficult to reconcile these positions!

@Meski – I can’t wait for the opportunity to use that line myself, love it.

Schadenfraude is the word you want, Tim. 🙂

I’d be happy to pay for daily news, if it was any good. I stopped buying papers a long time ago, and am grateful to the BBC, NYT, Guardian and ABC (in that order) for keeping me informed about the world.

I tried The Times app, because, you know, its The Times. The app is crapp. Would I pay for the NYT or Guardian if I had to? Maybe at a push but its hard to justify paying for news that doesn’t deal with local events. But something like it, here, about Aus and good – sure, I’d pay. 99c a day seems ok.