A damning report in polite language

The report of the Commonwealth Ombudsman into the Christmas Island detention centre naturally enough was largely hidden from the public by the coverage of Cyclone Yasi.

A damning report in polite language. The report of the Commonwealth Ombudsman into the Christmas Island detention centre naturally enough was largely hidden from the public by the coverage of Cyclone Yasi. That unfortunate timing really is a shame because Allan Asher, the Ombudsman, without resorting to extravagant language has painted a shameful picture of how our government is treating detainees.

The underlying message is that there are too many people being detained at the Christmas Island immigration detention facilities and the current scale of operations on the geographically remote island are not sustainable.

When Ombudsman staff first visited the Christmas Island immigration detention facilities in October 2008, 32 people were detained there out of a nominal operational capacity of 744. By the time this report was finalised and eight Ombudsman inspection visits later, the Department of Immigration and Citizenship (DIAC) advised there were some 2757 people awaiting processing of claims, two thousand more than the facilities were designed to accommodate.

This is being managed through measures such as the use of marquee dormitories to increase ‘contingency accommodation capacity’ up to 2584 beds.

“There is little doubt that resources have been sorely stretched as the facilities have sought to accommodate a continued increase in numbers of people seeking refuge in Australia, including families and unaccompanied minors. Christmas Island is overloaded.

“The increase in numbers has created a difficult and challenging situation, for both DIAC and Serco who manage the detention services operations on DIAC’s behalf at Christmas Island.

“We remain concerned about timeliness in processing refugee applications, delays in security agency clearances and various health issues—particularly those related to mental health.”

The Ombudsman welcomed news that a heavy backlog of torture and trauma cases has been cleared, but found there remains a shortage of health services in general. The Ombusman made these recommendations: 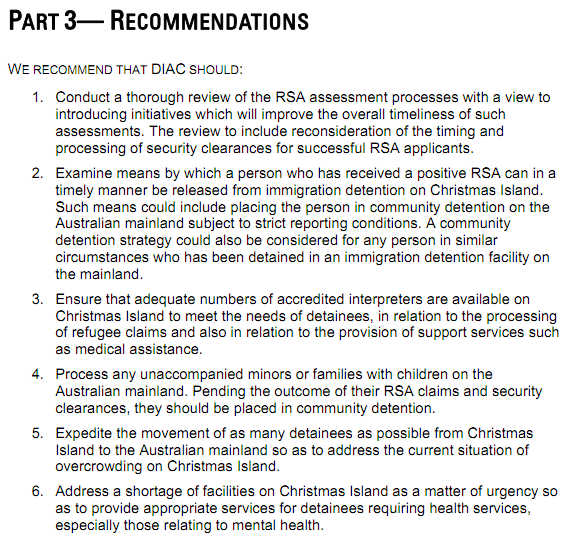 A reason to quit the mobile phone. I have been wary of mobile phones and other devices emitting radiation since reading a report on the subject years ago written by the then retired Chief Justice of the High Court Sir Harry Gibbs. The official findings of Sir Harry might have suggested that there was no evidence we should panic about the dangers but I thought his language hid some underlying doubts and a subsequent conversation with his daughter Margie did not make me change my mind.

Now I note that an inter-ministerial committee formed by the ministry of communications and information technology to study the hazards posed by mobile phones has been far more direct in pointing to the serious health risks posed by radiation from mobile phones and towers. 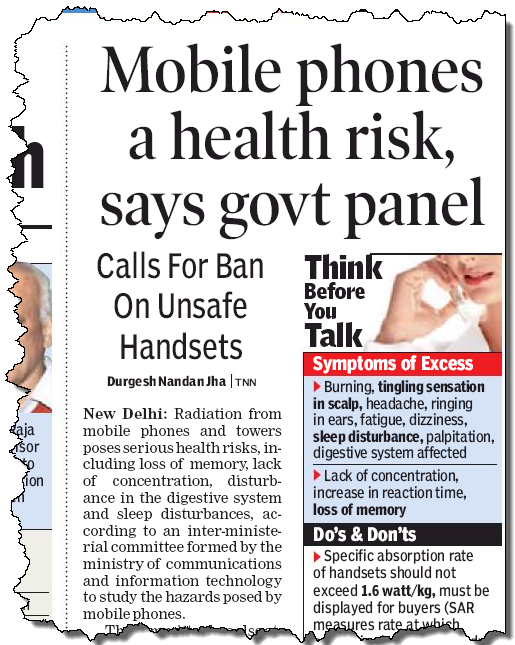 The Times of India’s coverage says the eight-member committee, which included representatives from the health ministry, department of biotechnology and member secretary, DoT, has recommended that mobile phones not adhering to standard levels of specific absorption rate (SAR) — a measure of the amount of radiofrequency energy absorbed by the body while using a phone — should be barred.

It has said mobile towers should not be installed near high density residential areas, schools, playgrounds and hospitals.

“The localized SAR value as per the Indian guidelines standard is 2 watt per kg, averaged over a six minute period and using a 10 gram average mass. With higher SAR values of mobile handsets the public could potentially receive much higher radiofrequency exposure. We have recommended that SAR levels to be lowered down to 1.6 watt/kg, as prescribed by the Federal Communication Commission of US,” said a member.

Dr R S Sharma, ICMR scientist who represented the health ministry on the committee, said the findings are based on case studies presented by different experts. He added that the recommendations would be used to formulate a national policy and guidelines on electromagnetic frequency (EMF) radiation for telecom towers.

“In the case of a person using a cellphone, most of the heating occurs on the surface of the head, causing its temperature to increase by a fraction of a degree. The brain blood flow is capable of disposing this excess by increasing the local blood flow and increasing body temperature,” states the report.

It says that the non-thermal effects of cellphone use — attributed to the induced electromagnetic effects inside the body’s biological cells — are more harmful.

“People who are chronically exposed to low-level wireless antenna emissions and users of mobile handsets have reported feeling several unspecific symptoms during and after its use, ranging from burning and tingling sensation in the skin of the head, fatigue, sleep disturbances, dizziness, lack of concentration, ringing in the ears, reaction time, loss of memory, headache, disturbance in digestive system and heart palpitation,” the report says.

Is no sport sacred? In Australia we have a rugby league player charged over efforts to fix an interim result in a game and in Japan their sacred sport of sumo is rocked by a match fixing scandal. I’m almost embarrassed at having once been a sports bookmaker!

Governments deserve praise. The country’s three levels of government — local, state and federal — deserve praise for there being no apparent loss of life from the cyclone that struck Queensland overnight. The actions our politicians and public servants took in preparing clearly were effective.

It will require a re wright of the laws of Physics to explain this irrational idea! This can be placed in the same group as MMR vaccine and autism,power lines and cancer and male sterility and laptops.The more
we overcome real health problems,the more false claims are made against safe things.

re mobile phones: I have no doubt, Richard, that these allegedly innocuous devices are dangerous. The symptom I regularly get is sharp pains in the right side of my head. Frequently I experience a short pain a split second before the mobile actually rings – really, I do. Am willing to do a scientifically supervised laboratory test on that.

Consequently my usage of these devices is minimal, any calls are kept to less than a minute. Life was better before the mobile phone, people engaged with their immediate surroundings and weren’t easily distracted when in company.

“I have been wary of mobile phones and other devices emitting radiation” – lightbulbs?
Don’t sit too close to your TV – it puts out more “radiation” than a dozen cellphones. And don’t go outside on a clear day – the carcinogenicity of UV is already well proven. Don’t use a laptop at a distance less than 2 yards.
Make yourself an aluminum hat and suit.

Scientifically supervised laboratory tests on people who claim to be sensitive to radiation show that their claims are false.

I never expected RFarmer to fall for truthiness.

Mobile phones – they will be this generation’s Big Tobacco. Just wait and see.