Several companies and individuals have been identified in Liberal and Labor documents as making donations, but were not recorded on the AEC website as having made any returns, as they’re required to do.

You’ve seen how much money the big mining companies spent bankrolling the campaign against the Rudd government’s mining tax. But several of them failed to report their donations, in effect ignoring their legal obligations under the Electoral Act.

Under s.305B of the Electoral Act, anyone making a gift totaling more than $10,000 to a political party during a year must provide a return to the Electoral Commission within 20 weeks of the end of the financial year — the middle of November.

The word “gift” is important — under Commonwealth laws, you don’t have to disclose payments to parties that are made in exchange for some sort of benefit — even if it’s a seat at a party fundraiser or token “access” to a senior party member at a function. That’s different to NSW, for example, which require donors to reveal those sorts of payments, but under the Commonwealth act, only the political parties themselves are required to disclose them, not the donors. That’s why the party returns distinguish between “donations” and “other receipts”.

Some companies — for example, Macquarie Bank and Santos — routinely report all contributions regardless of their legal status. Macquarie Bank, in particular, has done that for years. Others use the law to avoid reporting what they’ve given to parties.

In the material released yesterday by the Australian Electoral Commission, several firms and individuals have been identified in Liberal and Labor documents as making “donations” for amounts above the reporting threshold of $11,200, but were not recorded on the AEC website as having made any returns, as they’re required to do.

Clive Palmer was one of the offenders. The big Queenslander gave $100,000 to the Western Australian Liberals, $500,000 to the federal Liberals and $55,000 to his own personal fiefdom, the Liberal National Party in Queensland. But Mineralogy only sent a return to the AEC yesterday, when the commission released its material and the media began covering the company’s donations. Mineralogy told Crikey this morning there had been an “oversight”. Mineralogy’s return was on the AEC website as of about 9.30 this morning.

Mineralogy has a long history of big political donations and normally discloses them on time. It appears that several other miners have decided to donate for the first time and not been too bothered about the obligations attendant on donations. Savannah Nickel and Lanfranchi Nickel — both owned by WA mining company Panoramic — each gave $125,000 to the WA Liberals. Panoramic itself gave $25,000 in a non-reportable non-donation contribution.

None of the three appear to have made a return yet. Venus Minerals executive Barry Felhberg gave $25,000 without yet making a disclosure. Other big WA Liberal donors also failed to disclose donations. Pool-cleaning tycoon Terry Jackson’s Furama gave a massive $250,000 donation to the Liberals. Wesfarmers gave $25,000. Both have given large sums to the WA Liberals before, and reported them, but hadn’t met their obligations for 2009-10. The mysterious “Purple Dragon Trust”, linked to a training company, gave $50,000. It too had not disclosed its donation.

In contrast, other big miners met their obligations. Nickel miner Western Areas NL provided a return for its $400,000 donation. So did Straits Resources.

Chinese interests, too, appear to have a problem with disclosure. Large ALP donors of the past such as Beijing Austchina and Kingold seem to routinely have difficulty complying with their disclosure obligations. In 2009-10, Shenlong Australia Investment group failed to disclose its $200,000 donation to Labor.

Optus was another that failed to report its donations — $20,000 to the federal Labor and Liberal parties. Optus told Crikey in a statement this morning: “Optus takes the disclosure of political donations very seriously and we are committed to transparency in this respect. We have disclosed in all previous years and due to a recent changeover of staff resulting in an administrative oversight, Optus failed to declare its donations for the last financial year to the AEC. We have spoken to the AEC and are in the process of lodging our disclosure of donations today. Optus regrets the oversight and is committed to working with the AEC to ensure we meet their deadlines at all times in the future.”

Crikey contacted the other companies mentioned here, except for the Purple Dragon Trust. None had responded by deadline, but a number are in Perth and three hours behind us.

A spokesman for the AEC told Crikey that where there’s a question of an outstanding donor return, the commission will contact persons or organisations to ascertain whether or not they actually had a reporting obligation and if they did, will ask them to lodge such a return. 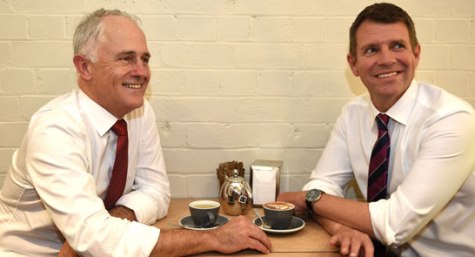 Regardless of whether they play ball or not with honesty regarding donations to the AEC, they have demonstrated that they can buy a political party, change the course of a political career, and dictate the result of an election.

The legislation was enacted to stop this. Now we have proof that we are no different to any tin pot crappy third world asset rich, ethics poor country in the world.
And we are cheap according to today’s Fairfax press.

Like everything else now, we have been sold to the highest bidder, and our participation in the contract is commensurate with our ability to pay.

We are as sick as the insurance we can afford, we are as guilty as the legal representation we can afford, and we get apparently get the best politics money can buy,

These “donations” – more important is “the dividend”?
What was the guts of that little “misunderstanding” involving “Clive of Gedidinya” and that bright shiny “new” WA government he “helped pay for” ….. sorry, helped “bank-role”?

Well, I know that none of the nightly news channels covered this – someone please tell me it was reported in a paper of record?

“In a cavern, down in Canberra,
“Excavating” for a mine
Dealt a minor “forty niner”,
With his darling Clandestine…….”
(Sorry “Percy Montross”)