No movement at the top as Julia Gillard maintains a lead over the natural disaster plagued Premier of Queensland.

No movement at the top as Julia Gillard maintains a lead over the natural disaster plagued Premier of Queensland, largely owing to the extensive debate over the flood levy, although we would expect Anna Bligh to be front and centre for at least the next 24 hours as Cyclone Yasi nears the coast.

The anticipated damage bill from the cyclone will almost certainly recharge the debate about a permanent disaster levy — and a carbon price? Already it seems the realistic focus of that debate has moved from prevention to adaptation, with some people still missing that there’s a problem at all…

The independents all jump into the list thanks to their questioning of the flood levy with all of them and Adam Bandt refusing to toe the line either in part or in full. The joys of minority Government.

And the other main mover — Verity Firth…well, the soap opera has less than two months to run now, and the scriptwriters seem to be working overtime to try and keep the twists and turns coming right to the very last episode — surely the last four years is up there with the greatest pieces of public satire ever created. We on the sidelines can only applaud and admire. 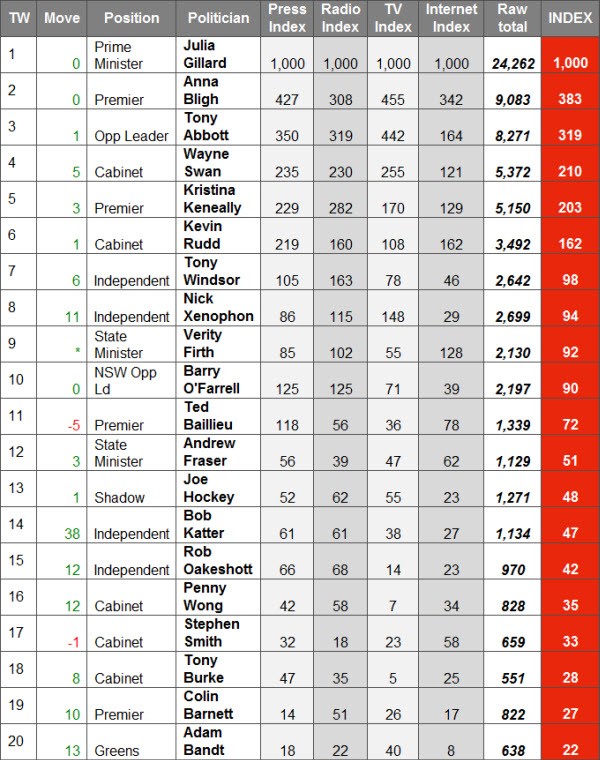 Big and overall mixed response to the flood levy on talkback, with many supporting the concept but unsure about the implementation abilities of the government.

If he could go back and pick a different cleaning product as a surname rather than just copying his dad, surely Charlie Hoover would have been the one to go with…

“Distasters”??? – use a spelling checker PLEEZE