Listening to Defence Minister Stephen Smith and his colleague Jason Clare at their press conference yesterday, you could be forgiven for thinking the government was taking decisive action by killing off several sick Defence projects. They announced the end of a problematic watercraft project that cost $40 million and delivered little capability, they flagged some honest concerns about the Army’s MRH-90 helicopter, and they focused on the transition to the Navy’s shiny new Canberra Class amphibious ships (pictured; image courtesy of Defence). 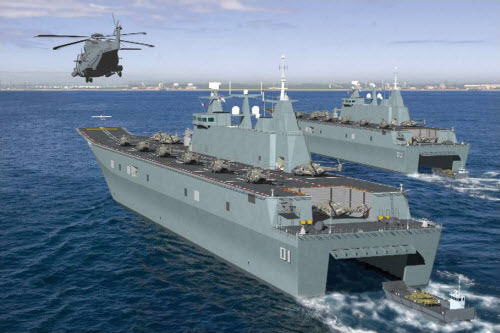 But they skipped over a more serious concern — Australia now has almost no amphibious capability to respond to emergencies in our region.

The ADF’s amphibious capability is critical to our ability to respond to humanitarian and security emergencies in our backyard. Two Navy ships underpin that capability: HMAS Kanimbla and HMAS Manoora. They are staging platforms for helicopters, can carry more than 400 embarked Army troops, and have medical and communications facilities to support an amphibious landing. They have underpinned recent ADF deployments to conflicts in East Timor, the Solomon Islands, and disaster responses such as Op Sumatra Assist.

The ships are also critical to Australian government contingency plans in our region. In 2006, Special Forces soldiers and Blackhawk helicopters were deployed on HMAS Kanimbla to waters near Fiji in preparation for a potential coup and the subsequent evacuation of Australians. HMAS Manoora also played a critical role in the MV Tampa incident in 2001.

In September last year both ships were tied up and declared unseaworthy after a fire broke out onboard HMAS Manoora inside Sydney Harbour. At the time, the Navy said both ships would be seaworthy again and ready for operations early in 2011. That is no longer the case — Manoora will never sail again and Kanimbla will undergo repairs until at least mid-2012. That leaves no amphibious capability for at least the next 18 months. Then we’ll have only a single ship until at least mid-2014, when HMAS Canberra is due to be accepted into service.

The Defence Minister suggested a range of solutions today, including borrowing from our neighbours and purchasing a surplus ship from the Royal Navy. The lack of detail on both suggests the department is scrambling for solutions. The purchase of the Royal Navy ship looks likely, but it will take time to arrange and retrain Australian sailors to operate a new class of vessel.

The Australian Government faces serious limitations on its ability to project power within our region. Without Kanimbla and Manoora, the ADF will struggle to move equipment and troops to the Solomon Islands or East Timor, should tensions flare. At the ADF’s operational headquarters, planners will be speedily rewriting contingency plans for potential ADF “non-combatant evacuation operations” in support of DFAT. The government will have fewer policy options to changes in Fiji.

How the ADF has ended up in this situation is unclear. Senior Navy officers have been quoted as suggesting the ships failed because they were “neglected and overworked”. The Chief of Navy said in Senate Estimates in October last year that the ships had “high-onboard training loads”, manning shortfalls, and “experience lower than we would like” among the crew. It seems the ships’ problems were greater than just maintenance schedules and rust patches.

The ADF has allowed a critical naval capability to deteriorate to the point of failure. This will pose serious risks for multiple government agencies. Rather than being buried in a series of bad news announcements by the Defence Minister, this should be fully investigated in a formal inquiry.

Forget about humanitarian disasters, with no ‘phibs how do we move troops around our own 25,000 km of coastline in the event they are required? Perhaps Defense wants to press the Spirit of Tasmania into service, ala QE2 in 1983?

It’s good to know that with such people in power we can sleep at nights without fear.

How can you say the RAN has no amphibious capability when our oldest landing ship, HMAS Tobruk is still in service and will be until the Canberra class come into service. Makes this whole article null and void really.