Cyclone Yasi is going to have a big say in how much the planned flood levy will be.

Hopefully no regrets for a hasty decision. The wisdom of the federal government in rushing ahead to make decisions on how to raise the money needed to repair a flood-damaged Queensland is looking questionable today as cyclone Yasi moves towards northern Australia. 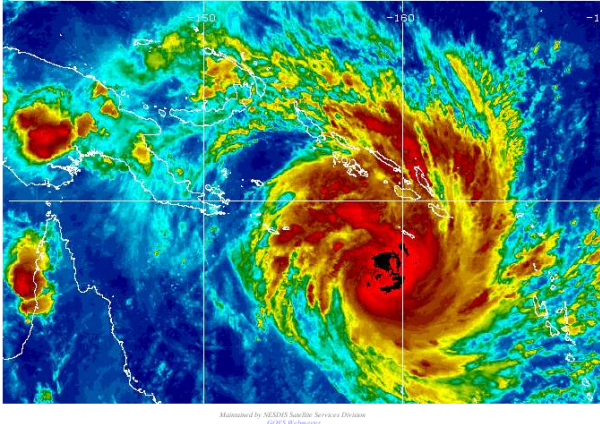 You can track the progress of cyclone Yasi here

The frightening prospect is that much more damage is about to be inflicted on Queensland and that the bill will be far greater than anything so far provided. Should the worst happen, Prime Minister Julia Gillard will look silly indeed for promising that there will be no increase in her planned flood tax/levy.

President Hosni Mubarak’s chances. The collective wisdom of the market is that Egypt’s president has only a 35% chance of still being in office at the end of this month. On the Intrade prediction market there has been considerable fluctuation as events unfold. A day ago the probabilities were 75% that he would be gone by midnight on February 28 and 25% that he would still be president compared with the current 65% going and 35% staying. 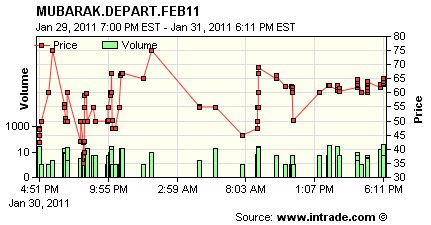 A two-film race. In Hollywood they might be considering ways to re-edit The King’s Speech to get rid of the swearing and hence the R rating that is affecting box-office attendances, but the version is doing well on the awards front just as it is. The latest success was at the 17th annual Screen Actors Guild Awards in Los Angeles overnight where the film won the award for best ensemble cast and Colin Firth for best actor. The Crikey indicator now has it as the clear favourite to win the Best Film Oscar. 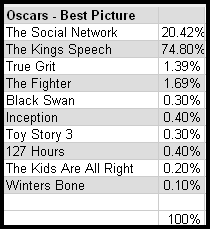 House price increases slow. The price of established houses in the year through to December increased by 5.8% — the smallest increase since the September quarter of 2008 (+1.4%). 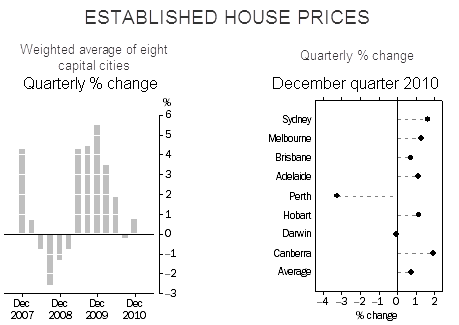 The preliminary estimate for Sydney (+1.6%) was the lowest quarterly rate of increase since December 2006 quarter (+0.4%). Across the price range in December quarter 2010, median prices in some clusters increased while others decreased. Most of the positive contributions to the capital city quarterly increase were concentrated in clusters with median prices of $1,500,000 and above, and $400,000 and below. The movement for Sydney through the year to December quarter 2010 (+7.4%) was the lowest through the year increase since September quarter 2009 (+6.1%).

The preliminary estimate for Melbourne (+1.3%) was the seventh consecutive quarter of increases in the index. Across the price range, median prices in some clusters increased while others decreased. Most of the positive contributions to the capital city increase were concentrated in clusters with median prices above $900,000 and below $460,000. The movement through the year to December quarter 2010 (+10.8%) was a return to the rate of through the year increase in September 2009 quarter (+10.9%), and follows four quarters of through the year increases greater than 15%.

The preliminary estimate for Perth (-3.2%) was the largest quarterly decrease in the series, which started in 2002. This was the third consecutive quarter of decreases in the established house price index for Perth, following the revision to the September quarter 2010 result (-1.8%). Median prices decreased across almost all clusters in Perth this quarter, with the index movement driven by clusters with median prices below $1,000,000. The index decreased 2.0% through the year to December quarter 2010. This was the first through the year decrease since June quarter 2009 (-2.9%).

Irrespective of Cyclone Yasi, there is no justification for a flood levy when this Govt has increased spending by 27% – the levy will raise 1.5%. All this bunch of parliamentary inepts need to do is just stop the waste. Are you listening Julia and Swanny, just stop the waste and there will be enough to rebuild this whole country and your beloved NBN.

The NBN will have ZERO impact on the budget because it’s classified as an investment. Unlike spending, it will make a return on investment.

As to the Government increasing spending by 27%, where did that number come from?

I don’t see the 27% anywhere in that document. The bigger issue is the expected gap between spending and revenue. We will need to raise taxes to fund the retirement of the ‘Baby Boomers’.

If only lorry and ronin8317 could get together, all our problems would go?

I would say that house prices will be in reverse in a certain State this week. I remember being in Innisfail post Larry and seeing every second house with a For Sale sign. I was told that the other half just did not bother to put up a sign. I walked into a real estate office and was lucky to get out alive. Those who lived thru Larry and did not leave may not wish to try for strike three.