Guardian gets leaked on … The Oz repels rockets

The Guardian shrieks but loses grip on WikiLeaks, plus The Australian saves lives in Afghanistan and other media news of the day.

Guardian shrieks but loses grip on WikiLeaks. “Holocaust denier in charge of handling Moscow cables,” The Guardian shrieked, trailing another part of its insta-book on WikiLeaks. The story concerned Israel Shamir, a figure who is well-known around the world as an inexhaustible activist around half-a-dozen causes — most recently in support of the popular opposition in Belarus, from which he despatched a number of post-election reports. Inconveniently, he also appears to be an anti-semite of the old school, full of various theories about comprehensive global Jewish conspiracies, and wading into Holocaust denial.

As The Guardian notes, at some point Shamir gained some responsibility for WikiLeaks distribution in Russia — probably connecting with the organisation through his son Johannes Wahlstrom, a journalist associated with the left-libertarian scene in Stockholm, which WikiLeaks — that is, Assange — connected to in 2009-10 The Guardian‘s shocking revelation is so compelling because of course it has known about Shamir all along. How do we know this? Because they’ve already published an article about it in 2010. Andrew Brown, the paper’s Sweden specialist, splashed the whole story on December 17 noting it raises “uncomfortable questions for WikiLeaks”. But the story was buried in the “comment is free” section.

Why? Because at that time The Guardian was still rolling out page after page of WikiLeaks “cablegate” material. Why the sudden splash now? Because six hours before it went up, WikiLeaks announced it had signed a deal with The Daily Telegraph to get first look at its material in the UK from now on. — Kim Serca

The Oz saving lives in Afghanistan. Not that it’s one to gloat… But as The Australian proudly reported today, a “series of potentially deadly Taliban rocket attacks on the Australian military base at Tarin Kowt in Afghanistan has been stymied by a new rocket warning system”. Must have been those earlier reports that did it… 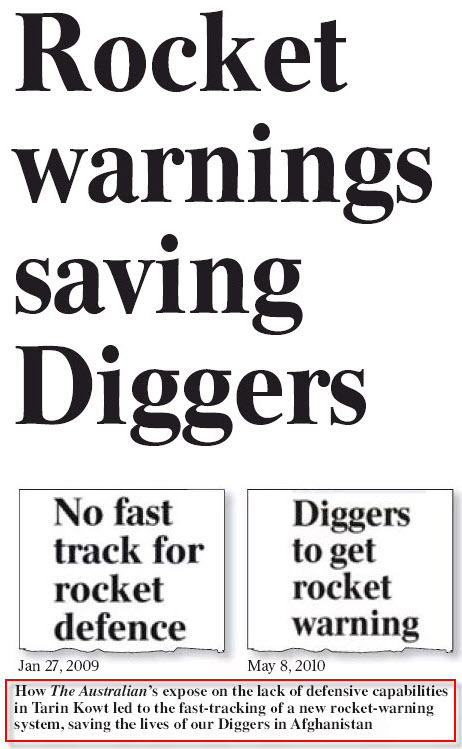 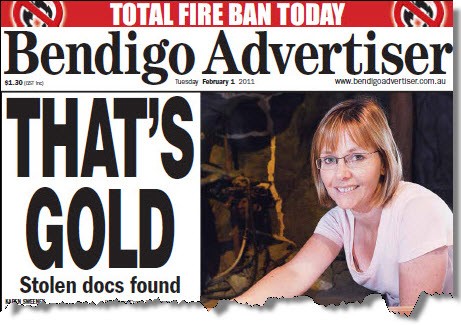 Alas, if the Advertiser‘s readers didn’t check out the online edition today they would have foregone a BBQ or the burning of tyres unnecessarily… 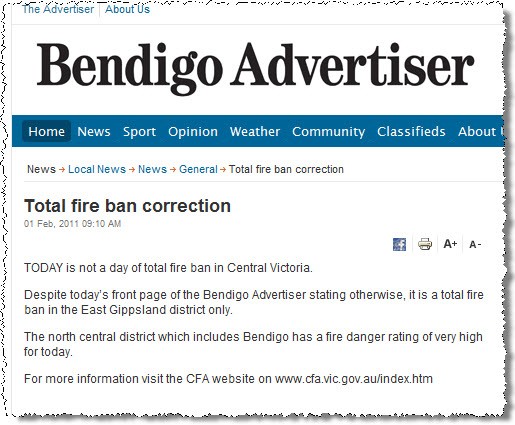 “Like many people we’ve been glued to the news unfolding in Egypt and thinking of what we could do to help people on the ground. Over the weekend we came up with the idea of a speak-to-tweet service—the ability for anyone to tweet using just a voice connection.” — The Official Google Blog

“Lionel Barber, the editor of the Financial Times, tonight warned that the Britain’s newspapers were now at risk of facing political ‘retribution’ in the form of statutory regulation in the wake of the News of the World phone-hacking scandal, as he gave the Hugh Cudlipp memorial lecture.” — The Guardian

“Today in media stunts: Naomi Campbell interviews Vladimir Putin for British GQ. Her opening gambit? ‘You’re in pretty good physical shape. How do you manage to keep yourself so fit?’ It gets worse (better?) from there.” — Jezebel

‘Thanks for suing us’: fast food chain’s ad defence

“If Taco Bell’s beef is 88 percent ground beef and 12 percent secret recipe, can it still be called ground beef? The Yum Brand says yes, and is running a full-page ‘Thank You For Suing Us’ ad today in USA Today, the Wall Street Journal, and New York Times responding to a lawsuit accusing the fast-food chain of not meeting USDA standards for marketing its meat.” — AgencySpy

“Circulation of the Independent‘s 20p spin-off i hit an average of more than 170,000 a day last week, according to the first sales figures revealed by the publisher.” — The Guardian