The levy dividing the nation

Crikey media wrap: From levee banks to levy banks, recovery from the recent Queensland -- and NSW and Victorian -- floods will cost the Australian economy an estimated $5.9 billion.

From levee banks to levy banks, recovery from the recent Queensland — and NSW and Victorian — floods will cost the Australian economy billions. “…The best preliminary estimate of the direct cost to the Federal Budget of this summer’s flood disaster is just over $5.6 billion,” declared PM Julia Gillard yesterday, as she proposed a flood levy to help raise around one third of those costs.

The facts of the levy — essentially a once-off tax — are this:

It’s important that Gillard gain popular support on this in order to get the levy passed in a tight parliament. So far, things are looking worrying for her.

The majority of talkback callers yesterday afternoon and this morning questioned why they were being hit by the flood levy tax, particularly after they’d already donated. One caller, whose family earned a combined $200,000+, objected to the levy on ABC 774 Victoria, noting that he had already donated over $1000 to the appeal.

Caller Phil to Triple M Melbourne said Australians have become whingers who are happy to take money from the Federal Government, but do not want to give anything back.

Many callers mentioned the high cost of the National Broadband Network, with several callers happy to pay a flood levy provided the NBN is scrapped.

Caller Bill, a final-year economics student, spoke to ABC 612 in Brisbane — he said the levy is well and good from an egalitarian standpoint, but it’s indicative of a bigger problem that’s creeping into Australia. He says if the Government is constantly bailing people out and introducing levies, it doesn’t encourage people to take responsibility for their own circumstances.

Other callers were quick to question why a similar levy wasn’t introduced after the Black Saturday bushfires in Victoria and the Canberra bushfires, or noted how they had lived through natural disasters and had received no such treatment from the government. Others noted how much the Liberal government under John Howard loved levies, with an Ansett levy — that went on for longer than promised — and a gun buyback levy introduced under his government.

A glance at the newspaper front pages also show a variety of attitudes across the nations from “Gillard’s levy hits rough water” in Melbourne’s The Age to “Hands up to help your mates”: 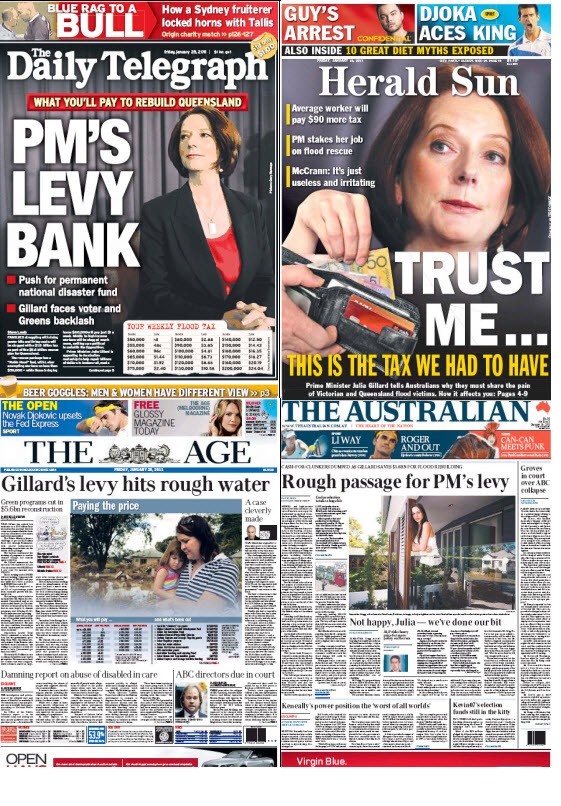 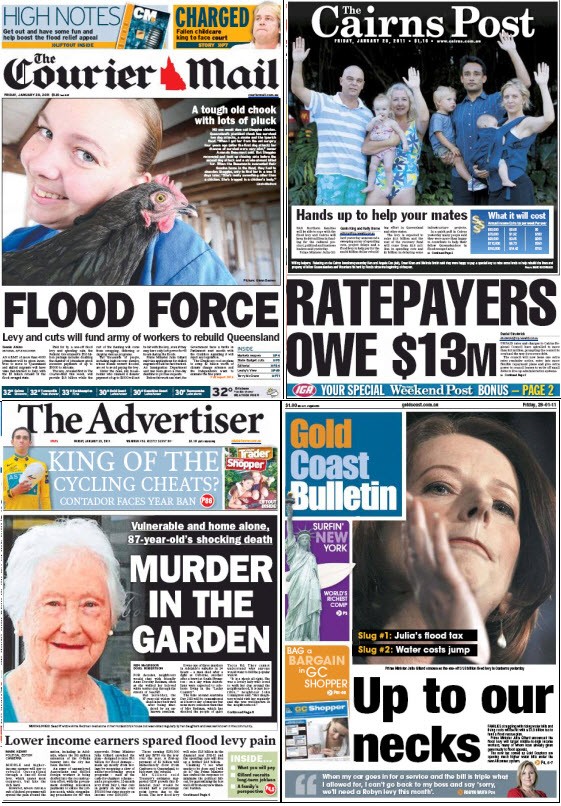 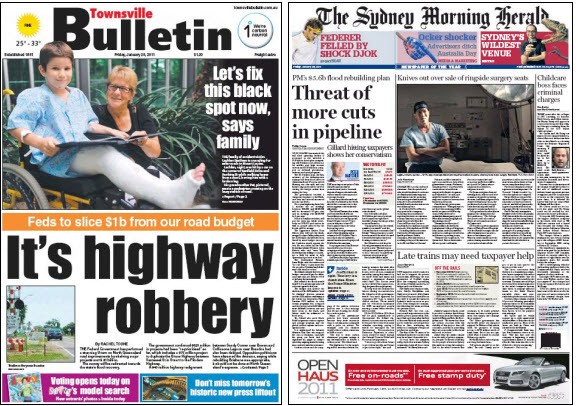 It’s interesting to note that the girl on the front cover of The Australian complaining about the levy won’t actually be paying the levy,”Ms Gregg believes her pay as an administration worker will be under the threshold of the levy,” although her partner is expected to pay it.

Here’s a look at what the pundits are saying:

Don’t say the ‘T-word’ warns Tony Wright at The Age:

Tricky business, announcing a new tax. Rule No. 1 is to avoid at all costs actually mentioning the word. And it must be presented as not only necessary, but virtuous.

Compared to other government programs and initiatives — like Rudd’s stimulus — the $5.9 billion number is positively trivial, argues Peter Hartcher in the Sydney Morning Herald.

For all the political sound and fury that you will see in the weeks ahead, the economic cost to the nation appears to be eminently affordable.

The Gillard government is suffering a “crisis of confidence”, declares Jessica Irvine in The SMH:

Joe Hockey is right. This flood levy is a dumb idea. And I suspect even Julia Gillard knows it.

This is typical of a government still attempting to establish authority, says Tom Dusevic in The Australian:

Again, Labor has been forced to make policy on the run, the default setting of a tentative leader and a government that appears forever under the pump.

No one cares about the policies being cut to pay for the floods apart from the greens, writes Ben Packham in The Oz:

The government was just waiting for an excuse to dump its policy duds. The hardest thing about the cuts for Labor is the pressure they will put on its fragile parliamentary majority.

It wasn’t an accident that Gillard used the word ‘I’ 50 times in her National Press Club speech yesterday, notes Michelle Grattan in The Age:

When a prime minister resorts so often to the personal pronoun, there is a reason. Gillard wants to stress her authority.

The Prime Minister has not had a good summer. She has come under a lot of criticism for looking stilted when visiting flood areas or talking generally about the crisis. In contrast, Queensland’s Anna Bligh, on the nose a few months ago, has won extensive praise.

I also find it interesting that Hockey and Abbott sit back and say they would cut the budget but I haven’t heard any specifics.

As someone who got 600mm of water into the house but managed to get everything up high so did not stick my hand out for money I’m slightly annoyed that I’m not considered to be “affected by floods”.

That annoyance will pass and I’ll just have to think of it as a donation to people that were not so lucky. It’s hard to think of another way to work out who is exempt anyway.

I don’t mind paying the levy. At least now I know what it will cost me, so I can reduce my total donations by that amount, which is exactly what I’ll do. But it’s annoying that so much money is still being wasted in leftover stimulus programs that should have ended a year ago, at the same time that the federal budget should have gone back into surplus. If they had done that, I wouldn’t mind if they went into slight deficit now for repairs after the floods.

The irony here is that the same wise men who created and promoted the financial equivalent of global warming are the ones leading the bitching about the levy. Unbelievable gall from discredited usurers and urgers.

This immediately tells me the levy is the right thing to do.

As for the people who did not hand back their $980.00, suck it up; you will get it back in the black economy, cash only deals, you will pull in the infrastructure rebuild. More irony.

lighten up freecountry; You can ease your guilt and still look generous by handing back your stimulus via the levy and donate the balance.

Free Country – Once again I will ask what the GDP growth figures would be if you removed the stimulus impact, especially if you go back a year.

As for reducing your doantions, if you don’t think you need to support the individuals who have been effected and help rebuild infrastrucutre like roads, railways, bridges etc that’s up to you but don’t forget to factor in the reduction in tax casued by your donations. For example if your earned $60k and donated $100 you will have to pay a $50 levey but get back $35.50 (including low income offset but not any family tax benefits you may be entitled to) so the net extra cost to you would be $14.50 or $0.27 per week. I hope you put it to good use.