A little levy perspective from the exceedingly sensible Possum Comitatus on his Pollytics blog:

This is what 1.8 billion looks like in the context of the wider economy: 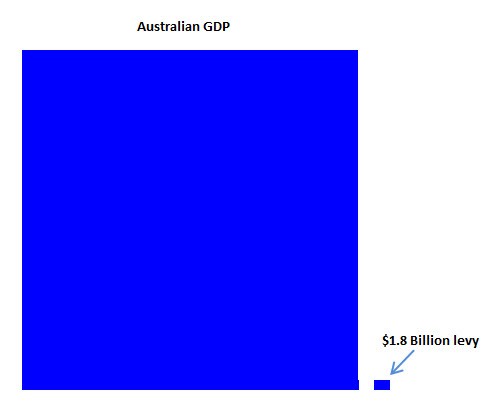 “Treasury’s revenue estimates are usually out by more than that every year,” says Poss, “so don’t be surprised if, ultimately, the levy turns out to have not been needed to bring the budget back into surplus in 2012/13.”

So what’s this all about then? Other than giving people the chance to whinge about this latest Great Big New Mateship Tax (even if their income comes under the levy threshold)?

“…it seems to be more for the purposes of creating a political argument considering the actual size of the numbers involved,” says Possum.

Certainly Gillard seems to have her mojo back this morning, picking fights with 3AW’s Neil “don’t patronise me Prime Minister” Mitchell and stamping her authority — along with the “I” word (used more than 50 times in her Press Club address, Michelle Gratton counted) — all over this latest political move.

The biggest piece of news, suggests Possum, out of all this heat and light — aside from the deep cuts in renewable energy investment — is the government putting the overall cost at 5.6 billion — not nearly as much as some may have earlier feared.

Biggest news, that is, save for that other cost — to date, 35 people have died in flood-related incidents across Queensland since November 30. That’s a cost that isn’t measured by GDP, and too often gets forgotten once the disturbing images leave our TV screens to be replaced by prime ministerial press conferences and levy vox pops.

I’ve never listened to Neil Mitchell before (wrong state), and after that interview I hope I never will again. What an arrogant, rude, obnoxious grub – I bet he wouldn’t have dealt with Tony Abbott that way.