Labor's attempt to milk a national disaster to its own advantage knows no bounds.

Labor’s love of cheap gimmicks is getting worse. Labor’s attempt to milk a national disaster to its own advantage knows no bounds. Now we are to have a new set of awards for national heroes. 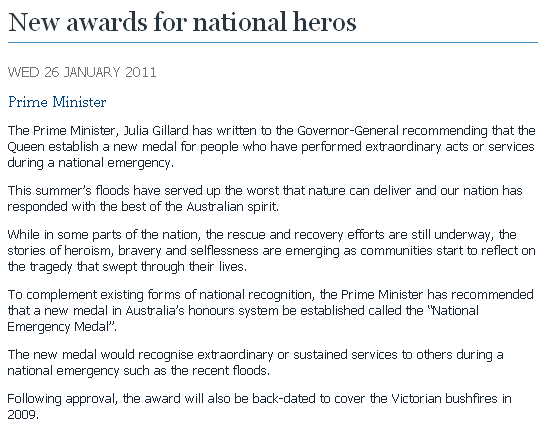 And what is wrong, might I ask, with myriad existing awards for good citizenship? Only that they do not present Prime Minister Julia Gillard with a cheap publicity gimmick.

Doctors lead the wages way. Medical practitioners top the list of average weekly cash earnings by full-time non-managerial adult employees, according to figures released this morning by the Australian Bureau of Statistics. The ABS figures show that in May 2010, a quarter of all employees earned less than $528 per week, with another quarter earning more than $1304, while the average earn of medicos was $2903.90.

How does your job rate? The full list by job type is on Crikey’s The Stump blog site.

Salmon dominate the word cloud. National Public Radio is the United States asked its Facebook fans to sum up the State of the Union address by President Barack Obama in three words. The thousands of submissions were made into a word cloud and this is what it looked like: 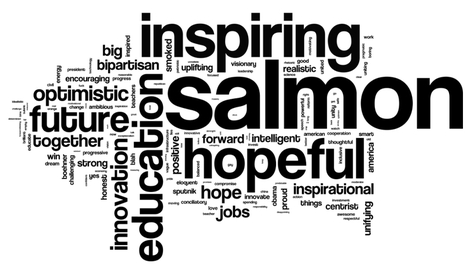 Salmon? It seems that laughs are more memorable than mere words. The audience of law makers had some bipartisan giggles after the president said this:

“We live and do business in the Information Age, but the last major reorganisation of the government happened in the age of black-and-white TV. There are 12 different agencies that deal with exports. There are at least five different agencies that deal with housing policy. Then there’s my favorite example: The Interior Department is in charge of salmon while they’re in fresh water, but the Commerce Department handles them when they’re in saltwater. I hear it gets even more complicated once they’re smoked.”

If you would like to see and hear the President as a joke teller, video of the incident is on Crikey’s The Stump blog.

Don’t mention the reason. Words you will not see in the word cloud above are “global warming” and “climate change.” Although a major theme of the SOU address was a commitment to American innovation and ingenuity by proposing new investments in clean energy research, development, and deployment, no case was presented as to why it was necessary. Such, I suppose, is the reality of trying to govern when you don’t have the numbers and many in the majority party in the House of Representatives do not believe there is such a thing as man-made global warming.

I have posted extracts from the Obama speech skirting around the unmentionable subject at The Stump.

… the economic recovery is continuing, though at a rate that has been insufficient to bring about a significant improvement in labor market conditions. Growth in household spending picked up late last year, but remains constrained by high unemployment, modest income growth, lower housing wealth, and tight credit. Business spending on equipment and software is rising, while investment in non-residential structures is still weak. Employers remain reluctant to add to payrolls. The housing sector continues to be depressed …

— From the statement of the US Federal Reserve’s Open Market Committee on their nation’s economy.

Iran’s cover up. Baroness Ashton, the EU Foreign Minister, has been given a more modest neckline in Iranian newspaper coverage of the talks in Turkey over Iran’s nuclear program. Who said that what women politicians wear does not matter? 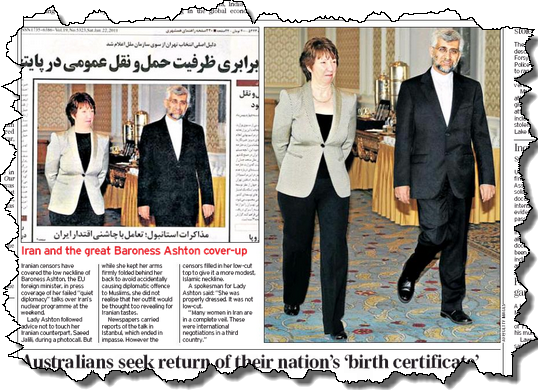