Egyptians online and on the streets, but a US ally stands firm

"This is the beginning of an uprising," Mohamed ElBaradei reportedly told Al Jazerra yesterday. ElBaradei has been dubbed Egypt's "reluctant revolutionary" and is viewed as the man who could help topple an oppressive regime.

“This is the beginning of an uprising,” Mohamed ElBaradei reportedly told Al Jazerra yesterday. ElBaradei has been dubbed Egypt’s “reluctant revolutionary” and is viewed as the man who could help topple an oppressive regime surrounded — literally — by angry protesters over the past 48 hours.

Emboldened by the overthrow of long-time Tunisian dictator Zine El Abidine Ben Ali last week, tens of thousands of Egyptians have taken to the streets — and to social media, which the government has periodically blocked — to rally against the autocratic government of president Hosni Mubarak. Like Tunisia, the world — particularly allies like the United States — watches on via international news agencies like Al Jazeera and a fast-moving stream of Twitter traffic.

In Cairo yesterday and now in the early hours of the morning the streets were calmer, reports teacher and The AWL blogger Gordon Reynolds. But as he said on Twitter before heading to bed: “Rumors of continued protests tonight in outlying districts”. Facebook groups are rallying followers for renewed protests on Friday.

On Tuesday an unprecedented wave of protesters surrounded the parliament building in downtown Cairo and protesters continued to clash with police in two cities on Wednesday. One protester and a policeman were killed in Cairo, the BBC reports, and in Suez a government building was reportedly set on fire. CNN says protesters were “beaten with sticks and fists and demonstrators were being dragged away amid tear gas”. In Suez — now the real flashpoint of protest, according to one Al Jazeera journalist — police deployed water cannons and implemented a curfew.

Around 700 people have been arrested, with the interior ministry declaring it “will not allow any provocative movement or a protest or rallies or demonstrations”.

Authorities were prepared for the riots. As Reynolds writes:

“There had been tweets that protests would be staged in Tahrir Square and in the downtown neighborhood of Mohandeseen. These tweets were received by Egyptian authorities monitoring the hashtag #jan25, and they deployed a massive security presence to deter any demonstrations. Officers stood in groups of six to eight, on nearly every street corner. They blockaded the entrance to the parliament building. The teams stood quietly with folded arms watching the empty streets as the sun rose over the Nile.”

Journalists have been targeted by police, according to a press freedom group. At least seven have been detained, The Washington Post reports, with one Associated Press photographer beaten and injured while shooting the demonstrations. British Guardian journalist Jack Shenker recorded harrowing audio from the back of a police van, after being “severely beaten” and detained during the protests. He wrote later:

“At one point the truck began to rock alarmingly from side to side while someone began banging the metal exterior, sending out huge metallic clangs. We could make out that a struggle was taking place over the opening of the door; none of the protesters had any idea what lay on the other side, but all resolved to charge at it when the door swung open. Eventually it did, to reveal a police officer who began to grab inmates and haul them out, beating them as they went. A cry went up and we surged forward, sending the policeman flying; the diabetic man was then carried out carefully before the rest of us spilled on to the streets.”

Shenker quotes one of his fellow inmates, a lawyer, saying: “As I was being dragged in, a police general said to me: ‘Do you think you can change the world? You can’t! Do you think you are a hero? You are not’.”

Authorities have blocked the websites of independent Egyptian newspapers. The Committee to Protect Journalists reports privately-owned broadcaster Hannibal TV was forced off the air for more than three hours, while state-owned news agency Agence Tunis Afrique Presse issued a statement stating an arrest warrant had been issued for the station’s owner on charges of “high treason” for an alleged “plot to destabilize national security.”

Facebook was blocked for a time (though now active according to one user) and Twitter reported hours ago: “Egypt continues to block Twitter & has greatly diminished traffic. However, some users are using apps/proxies to successfully tweet.” Still, Egyptians have managed to post graphic photos and videos of the protests and police violence… 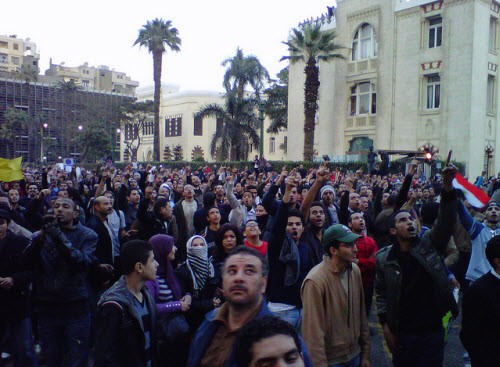 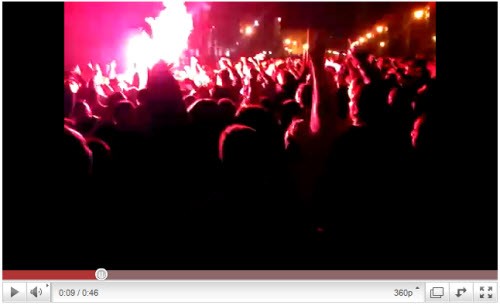 So what will the US do? The White House is monitoring the situation but playing its cards close to the chest. White House spokesperson Robert Gibbs denounces the violence, at least, but says only of Egypt and the president that it remains a “close and important ally”. And from the State Department today:

“As Secretary Clinton said in Doha, people across the Middle East — like people everywhere — are seeking a chance to contribute and to have a role in the decisions that will shape their lives. We want to see reform occur, in Egypt and elsewhere, to create greater political, social, and economic opportunity consistent with people’s aspirations. The United States is a partner of Egypt and the Egyptian people in this process, which we believe should unfold in a peaceful atmosphere.”

In the wake of the Tunisia uprising, and now protests in Egypt, the dilemma is obvious. As Middle East research fellow Shadi Hamid writes for The Atlantic (he’s also tweeting developments), a basic premise of US policy in the region — “that repressive regimes, however distasteful, are at least stable” — is now under question: “The US is — at least in the short term — stuck.”

“…in the growing battle between Arab autocrats and popular oppositions, the US is finding itself torn between the reliable allies it needs and the democratic reformers it wants…

“If tens of thousands take to the streets — and stay on the streets — what will it do? The US is the primary benefactor of the Egyptian regime, which, in turn, has reliably supported American regional priorities. After Iraq, Afghanistan, and Israel, Egypt is the largest recipient of U.S. assistance, including $1.3 billion in annual military aid. In other words, if the army ever decides to shoot into a crowd of unarmed protestors, it will be shooting with hardware provided by the United States.”

Foreign policy analysts agree the Egypt regime seems safe for now. As Marc Lynch, a political science professor at George Washington University, writes for Foreign Policy: “Unlike tightly controlled Tunisia, states such as Egypt and Jordan have been grappling with protests movements for going on a decade now and have an all-too-rich experience with how to repress, divide, and defeat the new protest movements.”

But leaders shouldn’t underestimate the mood for change, he says:

“There are strong reasons to expect most of these regimes to survive, which we shouldn’t ignore in a moment of enthusiasm. But we also shouldn’t ignore this unmistakable new energy, the revelation of the crumbling foundations of Arab authoritarian regimes, or the continuing surprises which should keep all analysts humble about what might follow…

“Tunisia has manifestly inspired people across the region and galvanized their willingness to take risks to push for change, even without any clear leadership from political parties, Islamist movements, or even civil society. The Tunisian example has offered the possibility of success, and models for sustained action by a decentralized network, after a long and dispiriting period of authoritarian retrenchment. Al-Jazeera and the new media have played their role in reshaping political opportunities and narratives, but it is people who have seized those opportunities. And the core weaknesses of these Arab states — fierce but feeble, as Nazih Ayubi might have said — have been exposed. They have massively failed to meet the needs of their people, with awesome problems of unemployment, inflation, youth frustration and inequality combined with the near-complete absence of viable formal political institutions.”

Let’s hope there isn’t a change which results in the nation becoming even less democratic, even less concerned with human rights.

I’ve been following Jacob Appelbaum on twitter who has been working with his followers to keep the internet connections open in Egypt despite the govt’s attempts to shut it down completely. Apparently the police are setting fire to cars in the streets without anyone understanding why but they think that it will be used as an excuse by the govt for a massive crackdown.

Watch this space very very closely… There’s lots going on, on the outskirts of the crumbling empire…