Julia Gillard reclaims her mantle atop the table which, in a sign of the times, is led by women, writes Media Monitors' John Chalmers.

Julia Gillard reclaims her mantle atop the table which, in a sign of the times, is led by women, with Queensland Premier Anna Bligh continuing to draw headlines. Treasurer Wayne Swan drops down the list despite warning the Queensland flood disaster will increase inflation next quarter — an apple a day won’t keep inflation away as fast rising fruit and vegetables prices and unprecedented rebuilding costs weigh on the economy.

Minister for Mental Health and Ageing, Mark Butler, former head of SA Labor’s left, gained coverage following the release of a Productivity Commission draft report proposing an independent body to streamline aged care access. At the other end of his portfolio outgoing Australian of the Year 2010, Patrick McGorry, warned lives will be lost if the government doesn’t combat mental illness. 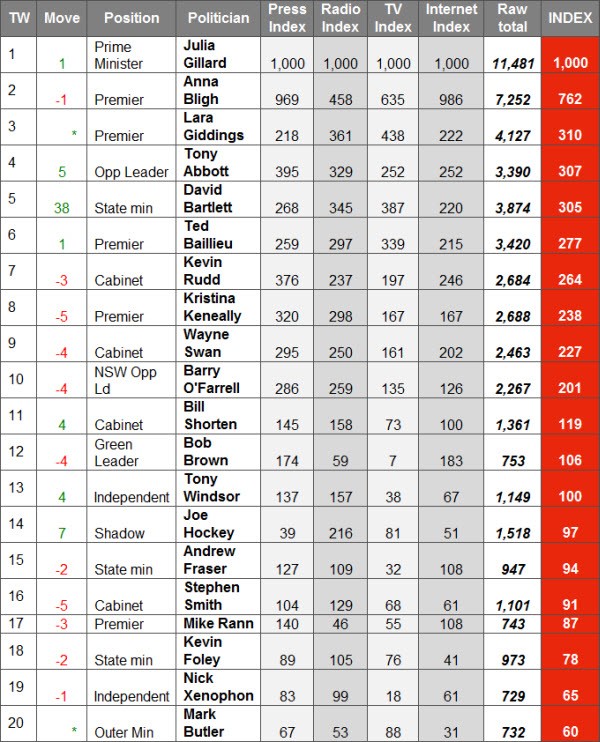 While political talkback volumes dropped, we note a return to normality as Tony Abbott rejoins the chart. Does this signal an end to the opposition leader’s recent ability to avoid the spotlight?

Oprah’s first show went to air as Queensland was under water. The talkback queen has since added her considerable two bob’s worth in drawing global attention to the disaster.