George Negus runs a 100 metre sprint (but keeps it all inside) in his game show premiere, Queensland tourism live in the past, NT returns to its "croctastic" best, twelve questions for Rupert Murdoch and more...

Slow down, George, and ask ‘why’. It was “fast-paced”, the Herald Sun and Sydney Morning Herald agreed this morning. “It was like a juiced-up athlete running a 100-metre sprint,” said Colin Vickery. “On the first effort: he deserves more time,” wrote Tim Dick. And the fearless thoughts of Twitter users seemed split. With an ocker “g’day”, in a trademark open-necked shirt, George Negus began Channel Ten’s $20 million news experiment last night with the first edition of 6PM. 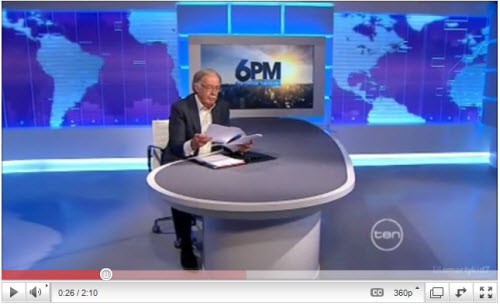 “Negus used the promos to suggest not enough journalists ask one simple question: ‘why?’ If his first interview with Julia Gillard is anything to go by, Negus isn’t planning to take his own advice. In the nearly 800 words of discussion, Negus claimed a 40 per cent share of everything that was said, without a ‘why’ anywhere in sight. It left us asking one simple question: why?”

And Ten, with its high-profile board of Lachlan Murdoch, James Packer and Gina Rinehart, may be asking why so few viewers gave it a chance: while the network claims it’s satisfied with the 606,000 metropolitan viewers who tuned in — more than Neighbours was doing in the same slot last year — they may have expected more to at least sample the highly anticipated product. — Jason Whittaker

55c one day, 60c the next. Despite its best intentions to be a with-it, go-getting sort of state, clearly those in Queensland Tourism are living in the past if the ads in the weekend papers are a guide. The full-page ads feature a postcard to Australians exhorting and encouraging us to visit the sunshine state. 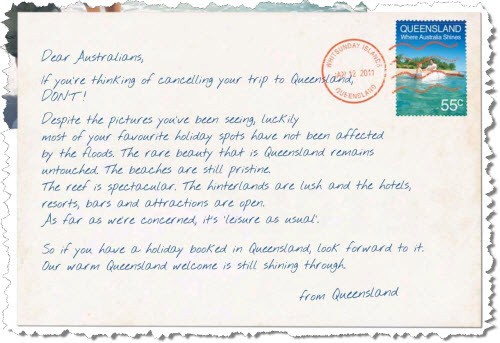 Alas, the stamp affixed to this card is for 55c even though the cost of a stamp went up to 60c in the middle of last year. — a Crikey reader

NT News returns to its “croctastic” best. It was only a matter of time before giant road roaming crocodiles replaced the floods and other news on the frontpage of Crikey‘s favourite tabloid… 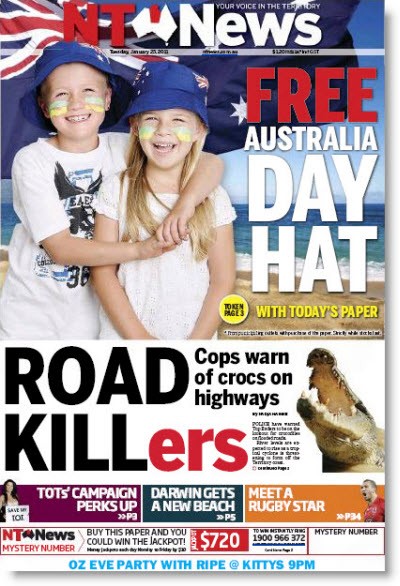 “Rupert Murdoch is in London — and we’re curious to know who at News International signed off more than £1m in settlements.” — The Guardian

“Over the weekend, Olbermann did not respond to e-mails, and remained uncharacteristically silent on Twitter, prompting many questions. If Olbermann really was axed unexpectedly, why would the famously outspoken pundit go so gentle into that “good night”? More important, why would MSNBC fire its most-watched personality.” — LA Times

“Two Sky Sports presenters have sparked a sexism row by claiming that a female linesman had no place in a Premier League football match because ‘women don’t know the offside rule’.” — The Telegraph

“Never mind Ricky Gervais. There may not even be a Golden Globes ceremony next year if things don’t get moving in court here.” — The New York Times

Is the new Stig on Top Gear a woman?

“The latest incarnation of Britain’s most famous television racing driver emerged in the new series of Top Gear last night — and fans reckon the figure behind the wheel may well be female.” — The Daily Mail

Study: 8% of Americans would rather give up food than TV

“If you had to surrender your cable, your mobile phone or internet, which would you choose? Well, 8% of respondents in our exclusive AdAge/Ipsos Observer study were having none of it — saying they would rather forgo eating than give up a media consumption device.” — Advertising Age

In all his years with SBS TV’s Dateline, George Negus probably never asked a difficult question of anyone. Instead he postured as a mate of the greats. A little more down market and appealing than ABC Radio National’s clubby and smug Philip (Late Night Live) Adams who only ever talks to people of whom he approves – and refers to his listeners as ‘gladdies’ (in rather the same way that Edna Everage always had a bunch handy to strew over her fans). Both are engaged in the dark art of pretending they aren’t peddling infotainment but information and ‘ideas’.

I watched him speed-commentating during the floods. I thought he was mad.