The cable release on WikiLeaks is still comparatively slow compared to late last year, but the WikiKids have stepped it up a notch, with an average of around 20- 30 cables being released daily. Here's our pick of the latest...

The cable release on WikiLeaks is still comparatively slow compared to late last year, but the WikiKids have stepped it up a notch, with an average of around 20- 30 cables being released daily. Here’s our pick of the latest:

Cuba is a state on the take

From “petty to grande”, Cuba is described as a “state on the take” in this US government cable released by WikiLeaks. US officials in the US interests section in Havana describe Cubans living off their abilities to”resolver” — a word which can mean everything from finding a creative solution to stealing. 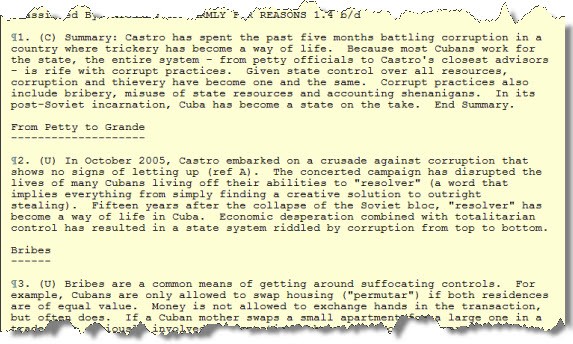 A key element of corruption is the prevalence of bribes in Cuban society, according to the cable. Police officers are said to request bribes when pulling over motorists, while bribes can also help people get “good jobs” — those where someone has the chance to “resolver”. State resources are also said to be a target for corruption and stealing, with resources like cement, paint and wood being particularly prevalent on the black market.

US government officials believe Castro’s attempts to rid Cuba of corruption will only result in the practice growing:

“The more corruption grows, the more Castro tightens control, and the more Cubans turn to corruption to get what they want…And so the Comandante continues his struggle to wipe out corruption, seemingly oblivious to its irreversibility as long as profitable activity is illegal, individual success is cause for suspicion, and old-fashioned hard work gets you nowhere.”

Shell Australia chairman Ann Pickard has featured in another leaked description of her regular briefings with US officials on oil and gas issues in Nigeria. In this cable Pickard offers her advice to the US Ambassador on security situation in Nigeria, in particular the problems faced by oil companies with piracy.

Pickard also discuses corruption in Nigeria, claiming that one government official allegedly requested $20 million to sign a document. The cable also highlights the pressure the oil companies were placing on the Nigerian Petroleum Industry Bill and how the US government and oil companies were seeking to influence the new Minister of Petroleum Resources, Dr. Rilwanu Lukman:

“Pickard sees the nationalism card cooling with the removal of former NNPC GMD Yar’Adua, given that new Minister of Petroleum Lukman is more ‘pragmatic’ and will hold sway over deputy Minister Ajumogobia… Although she also said terms like nationalistic and Chavez she however said that she thought he could be steered in the right direction on the petroleum sector.”

In a cable released by WikiLeaks last year, Pickard — the former head former executive vice president for Sub Sahara Africa and top executive for Shell in Nigeria — once claimed to the US government that the oil giant had staff posted throughout Nigerian government ministries, ensuring they could keeping tabs on regulation in the oil-rich nation.