Letters pages are always full of interesting opinions -- that’s what makes them so entertaining. But when a paper offers full-page treatment to a controversial opinion, there are sure to be a few ruffled feathers. Plus, other media news of the day.

Up in arms over “Silent Feet”. Letters pages are always full of interesting opinions — that’s what makes them so entertaining. But when a paper offers full-page treatment to a controversial opinion, there are sure to be a few ruffled feathers. That’s the case over in ute muster capital Deniliquin anyway, where the local paper is facing a bit of heat for publishing a controversial letter to the editor about immigration policy.

It all kicked off when Deni’s bi-weekly paper, the Deniliquin Pastoral Times, published a 1521-word letter by John Trist on January 14. Trist makes a number of claims about the integration of Muslim immigrants, asking readers to respect Australia Day and “protest loudly when minority groups want us to change our culture to suit theirs”. Trist also quotes a “famous politician” who said that immigrants to Australia should be treated without discrimination, but only if they are willing to become “in every facet an Australian, and nothing but an Australian”. These comments have recently been attributed to former Prime Minister Edmund Barton, a hoax which has been debunked according to the website Hoax Slayer.

The letter — which can be read online at the Diggers Military Motorcycle Club — was published under the headline “Silent Feet” and took up the majority of page nine: 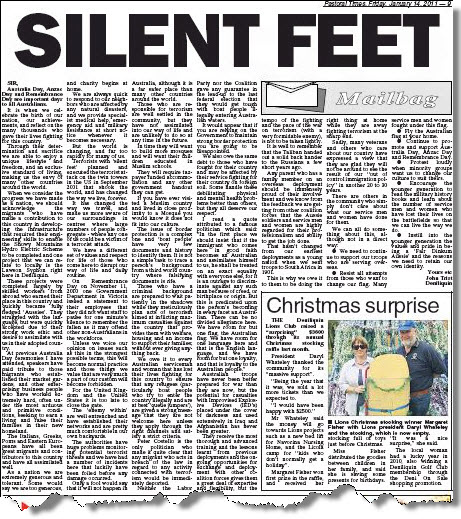 Local councillor Carlee Rundell-Gordon has already complained. She says the tone of the letter and the headline attached to it breaches a number of Press Council guidelines. She’s campaigning for readers to complain to the Press Council because it “vilifies Muslims and refugees”.

Editor Garry Baker defended the publication of the letter this morning. He says Trist is a “well-known local person” who said he had “given a lot of thought to this issue and wanted to express his view”.  He said that Trist suggested the headline and the paper “just ran with it”.

While the paper has yet to publish a response to Trist’s letter, Baker said they had received a letter from a Melbourne reader which would be published in tomorrow’s edition: “We’ll publish what she’s sent us. She’s got just as much right to have her say and an opinion. It’s not our place to form opinions, it’s our place to publish them.” — Tom Cowie

New editor for AFR glossy. The Australian Financial Review has finally appointed a new editor to run its monthly gloss magazine — the paper’s deputy editor Jeni Porter. Porter, a former senior writer and chief-of-staff at The Sydney Morning Herald, was responsible for overseeing projects like The AFR‘s salaries survey and running major investigations, including the Walkley Award-winning Storm Financial and Opes Prime series.

Former editor of The Australian Financial Review Magazine, Stewart Hawkins, quit Fairfax last year for a job in Hong Kong at the South China Morning Post. Crikey ruminated on tensions between Hawkins and editor Glenn Burge in November; the paper also lost ex-editor Kathy Bail last year to the University of NSW. No word on who will replace Porter on the news desk — with a plethora of deputies on staff there may not be a replacement. — Jason Whittaker

How journalists are spoon fed the news

“In the olden days, journalists used to be taught to always write in the active voice. Oops. Let me say that again. In the olden days, journalism educators told their students to always write in their active voice. Whatever happened to that edict? … It is simply NOT NEWS to say “Gillard is Under Pressure” when the alleged source of that pressure is an Opposition spokesman sticking out a press release on a quiet Sunday night. Once again, under-resourced newsrooms having to update stories once or twice an hour are desperate for fresh leads.” — The Failed Estate

The Andy Coulson affair raises the question — who runs Britain?

“That is only one example of the close ties woven between Tony Blair and Gordon Brown, when they were prime ministers, and Cameron now, and the Murdoch camp – the private meetings and dinners, the calls (no hacking there) and the mutual interest. We once used to think of the establishment as being cabinet ministers, archbishops, BBC panjandrums, leaders of industry and royalty. No longer. It’s the links between the government and the Murdoch empire that count today – a shadowy influence-mart.” — The Guardian

“Tunisia’s interim government abruptly shut down the country’s oldest and most popular private television network on Sunday evening, in an apparent violation of its pledges to respect freedom of expression after the ouster of the authoritarian president Zine el-Abidine Ben Ali.” — The New York Times

Does Keith Olbermann’s departure mean the end of the wingnuts?

“With Keith Olbermann’s departure, Glenn Beck’s collapsing ratings, and Sarah Palin’s recent missteps, we may be witnessing a national turn away from hard-core partisanship.” — The Daily Beast

“We’ve known for some time that he’s been working on a new television show, but no one knew it was this far along. He revealed the information in an interview with BBC News.” — Collider

As a regular visitor to Deniliquin, I am not surprised at the letter in the Pastoral Times, though the editor’s attitude does seem disingenuous. I’d bet he presents his decision differently in other circumstances. Deniliquin is an isolated and very monocultural place- about 2% of residents born overseas last time I looked, and has tiny non-Caucasian population. Most of the letter’s content is playground-standard rhetoric without much of an understanding that the most important qualities of Australia is that it is a liberal democracy which doesn’t require conformity to function, and that this in large part has been the basis of our success as a nation. The author is entitled to their views, but it doesn’t make them rational or useful.