How others see us: not too badly actually

The latest global happiness index sees Australia up near the top in fourth place and just behind three Scandinavian nations.

How others see us: not too badly actually. For some reason I don’t quite understand why we in the media rarely write or talk about how good things are. Criticism guides us rather than praise. We are the reverse of the old song — accentuate the negative, eliminate the positive. So it always comes as  bit of a surprise when those international surveys by various think tanks regularly put Australia up near the top of their rankings.

The latest to do so is The Legatum Institute that produces an annual prosperity index that assesses wealth and well being — some call it the global happiness index — and sees Australia up near the top in fourth place and just behind three Scandinavian nations. See the full table here.

Leadership speculation off and running. Good to see that leadership speculation is alive and well with that normally well informed old Liberal Party stager Alastair Drysdale pushing the chances of Malcolm Turnbull replacing Tony Abbott as Opposition Leader before the next election. You can read his argument on the website of our stablemate publication Business Spectator.

Still no strong inflationary signs. The consumer price figures tomorrow will be the guide to follow for those interested in what happens to interest rates but there was nothing to fear from today’s producer price index released by the Australian Bureau of Statistics. None of the Bureau’s three measures — of preliminary, intermediate and final stage commodities — indicate the price pressures are building. 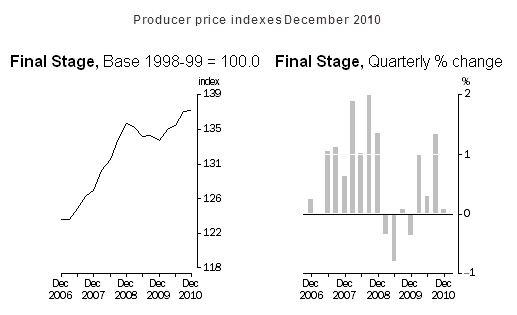 Clown of the week? There could only be one winner…