Crikey says: celebs to the rescue

The resignation of David Cameron's chief spinner and former News of the World editor Andy Coulson has ensured the News Ltd phone hacking saga doesn't just refuse to die, it's chewing away at the credibility of David Cameron, News Ltd and Scotland Yard.

The resignation of David Cameron’s chief spinner and former News of the World editor Andy Coulson has ensured the News Ltd phone hacking saga doesn’t just refuse to die, it’s chewing away at the credibility of David Cameron, News Ltd and Scotland Yard.

This thing, now years in the making, has tentacles that not only tap into the major circles of power in the UK, but pinpoint the places that they neatly intersect. (For more, may we suggest this chart.) 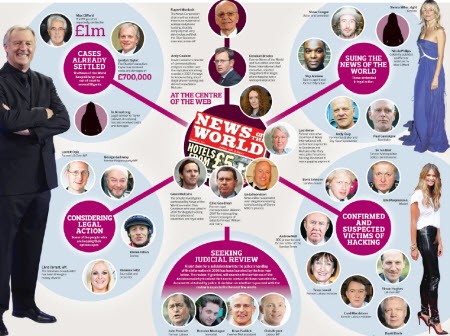 So who’s the person responsible for ramping this story up a notch? A fearless MP scandalised by the fact that their own phone has been tapped? An intrepid reporter unbowed by the spectre of Rupert Murdoch? An enterprising Scotland Yard detective?

The latest round of revelations that finally triggered Coulson’s resignation stemmed from Miller’s legal team. They pointed to evidence that knowledge of phone tapping extended to News of the World assistant editor Ian Edmondson, which subsequently triggered his departure and put the heat back on Coulson.

As The Guardian reported over the weekend, in the initial case against former royal editor Clive Goodman and private investigator Glenn Mulcaire the police approached at least five other people, including a senior Labour politician and a reporter on a rival newspaper, with a view to using evidence that their phone had also been hacked. All five declined:

Why they did so is open to conjecture, but it is clear many people fear the Murdoch press. For politicians, such a fear is compounded by the fact Murdoch’s newspapers can help swing elections. Significantly, not one current MP has launched civil proceedings against the newspaper, even though a number were informed by police that there was evidence their phones had been hacked.

And about time too.