Tennis star Andy Roddick delivered a backhand to Channel Seven's coverage of the Australian Open, after it chose to broadcast the Alicia Molik vs. Nadia Petrova match after it had already finished. Plus other media news of the day.

Roddick slams Channel Seven. Tennis star Andy Roddick delivered a backhand to Channel Seven’s coverage of the Australian Open, after it chose to broadcast the Alicia Molik vs. Nadia Petrova match after it had already finished.

“Why is Channel 7 showing a womens’ match that australianopen.org says has already been completed when there is live tennis all around?” tweeted Roddick. Seems many in the public agree, with hundreds of people retweeting Roddick’s comment.

Are you a Karl Stefanovic fan? Check out Nine’s shameless — and hilarious — video plug encouraging viewers to vote for the host in the “most popular presenter” category in upcoming Logies. We particularly enjoy Karl’s face as he strolls purposefully carrying a racing car helmet. 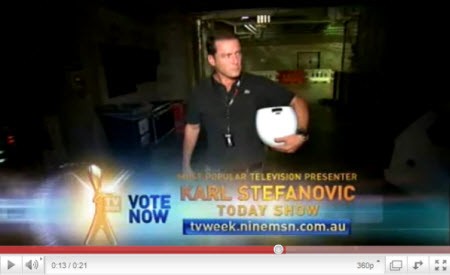 Beautiful one day… Sure, Queensland may still be mopping up the debris, but don’t let that stop you from heading for a trip up north to “support” Queensland, just like the latest YHA newsletter suggests. To be fair, most of the travel suggestions are away from the flood-affected areas, but if you do want a touch of voyeurism the Brisbane City YHA is currently offering a discount… 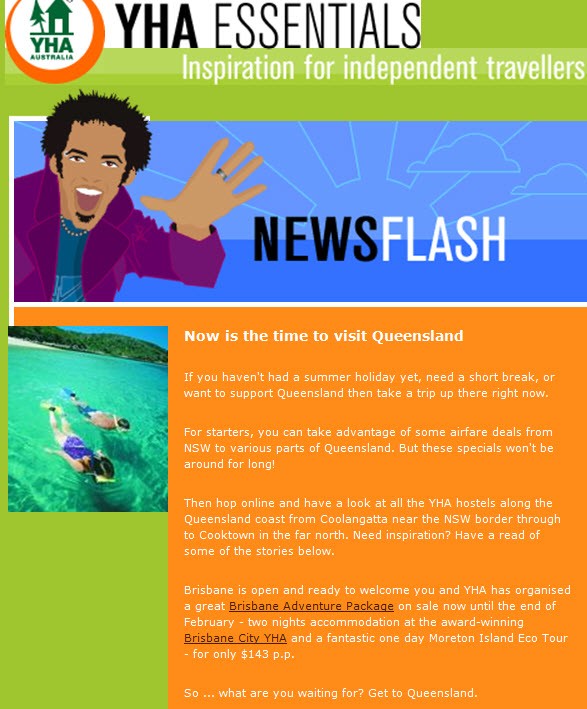 “Roger Ebert says he will be wearing a prosthetic chin when his new PBS show Ebert Presents at the Movies premieres Friday.” — Hollywood Reporter

Writing in the wind

“Bob Dylan has signed a six-book deal with Simon & Schuster, according to Crain’s New York Business, encompassing two sequels to his acclaimed 2004 book Chronicles: Volume One as well as another book based on dialogue from his Sirius/XM radio show Theme Time Radio Hour.” — Rolling Stone

“Fox News has cancelled an interview with the comedian Joan Rivers after she described Sarah Palin as “stupid and a threat” and blamed her for the recent attack on an Arizona congresswoman that left six people dead.” — The Guardian

“Magazine publishers and distributors need to understand that good base traffic is critical to the success of special interest titles — like this month’s issue of Rolling Stone magazine. Dilute traffic to newsagencies — by putting traffic generating and high volume titles elsewhere — and you put special interest sales at risk.” — Australian Newsagency Blog

Someone doesn’t abide by ‘fake it til you make it’

“A budding journalist has taken an unusual step to show her dedication to her chosen career — by having her name tattooed on her leg in shorthand… She said: “The tattoo has a personal and symbolic meaning to me. I think it shows my level of devotion to become a journalist, and that it is now engraved into me.” — Hold the front page

Karl Stefanovic – ahhh yes it became increasingly obvious as the flood crises deepened that Ch9 appeared to have it covered 24/7 by Karl and that this mammoth effort was to try and secure the logi for best coverage of a news event (or whatever it is) they probably deserve it, they did a good job.

Never really liked Karl much especially plonking his dorky brother into a cosy reporting job and when he showed up on 60 minutes I was horrified, but now I think he’s ok, very relaxed and easy to watch and listed to, or is it just that David Koch is just so horrible everyone else pitted against him looks good ?