Richard Farmer’s chunky bits: Global warming and the Oz … don’t read all about it

For a paper whose editor Chris Mitchell says it really does believe in climate change, there has been very little coverage in The Australian of the three organisations that have recently found that 2010 was the warmest year on record or at least close to it.

Hiding global warming? For a paper whose editor Chris Mitchell says it really does believe in climate change, there has been very little coverage in The Australian of the three organisations that have recently found that 2010 was the warmest year on record or at least close to it. I looked this morning, but could not find, coverage of the World Meteorological Organisation’s consolidated summary of the reports from the UK Meteorological Office Hadley Centre/Climatic Research Unit (HadCRU), the US National Climatic Data Centre (NCDC), and the US National Aeronautics and Space Administration (NASA) released yesterday in Geneva. No trace that I could see of HadCRU’s figures on the paper’s website and just this little newsagency report on the US reports: 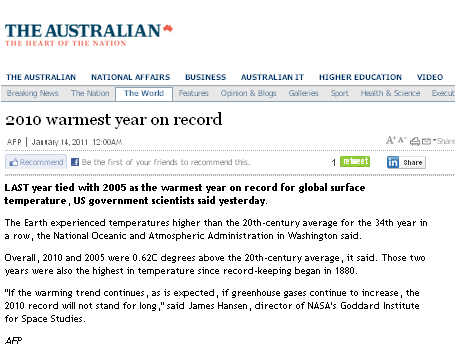 The lack of coverage makes a mockery of any claim by the Oz that it is trying to cover global warming in a serious fashion.

I have posted the WMO’s summary of the climate year on Crikey’s The Stump blog.

An Obama rally. As he prepares for his annual State of the Union address, President Barack Obama finds his popularity, as measured by Gallup, back above the 50% mark for the first time since May last year. 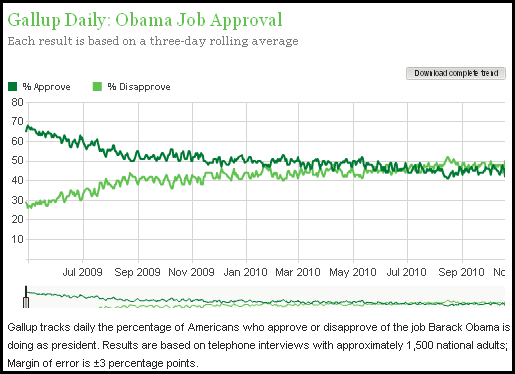 Another sign of global warming. The Thai government has closed 18 popular diving sites for up to 14 months to allow coral damaged by bleaching to recover.

More than 80% of the coral at each diving site had been damaged, National Parks, Wildlife and Plant Conservation Department chief Sunan Arunnoparat told the Bangkok Post yesterday.

A loud tie disrupts a parliament. When the British national charity Beating Bowel Cancer asked people to wear loud clothes to work to raise awareness for the disease, it probably did not have in mind Conservative MP Nadhim Zahawi’s tie. It wasn’t just the colour that was loud but also the sound that went off as he was addressing the House of Commons. 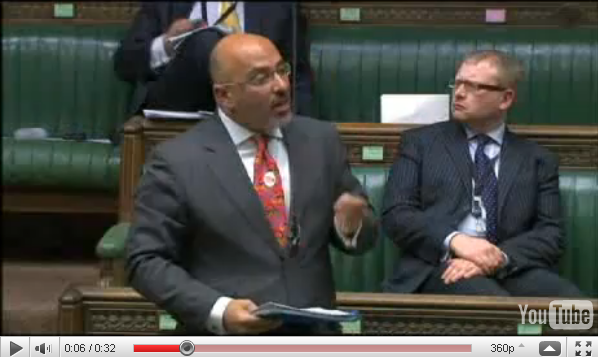 Comment of the day: hypocrisy is alive and well. Goshome, commenting at the Crikey blog The Poll Bludger on the Opposition reaction to government talk of a Queensland flood levy, remembered a different definition by Tony Abbott of what is a levy and what is a tax, when Abbott described on ABC radio his plans for a “levy” on business to pay for his parental leave scheme in this way:

Mr Abbott maintains this levy is not a tax.

“A levy has a specific job and the specific job of this levy is to fund visionary social change and important social reform,” he says.

Quote of the day — gas to the energy rescue. “Based on current rates of consumption, it is estimated that recoverable conventional gas resources will last around 130 years. This length of time could be doubled with ‘unconventional’ gas, so it is little wonder that the current scramble for these previously untapped resources is now firmly under way.”

A report on the significance of what the energy experts call “unconventional” gas supplies is on Crikey’s The Stump website.

So much for no surprises