US-China experts are calling it the most important US visit by a Chinese leader since Deng Xiaoping’s groundbreaking 1979 tour. Who said the standard of political discourse in the US was slipping?

US-China experts are calling it the most important US visit by a Chinese leader since Deng Xiaoping’s groundbreaking 1979 tour. During his historic visit President Hu Jintao has cited his work with President Obama on Iran, North Korea, the global economic crisis and climate change as evidence that, despite a difficult year in US-China relations, the two countries are binded by these issues. As is the rest of the world.

The president has also, in so many words, suggested the US should back off over Tibet and Taiwan.

The US media have been all over the visit, detailing everything from the global implications of the visit, the significance of Hu’s visit to Chicago, to the CEO of Coca Cola’s toast faux pas, and the ingestion of apple pie.

Then there’s Rush Limbaugh. We give you the Mickey Rooney stylings of the popular radio commentator, with his take on events: 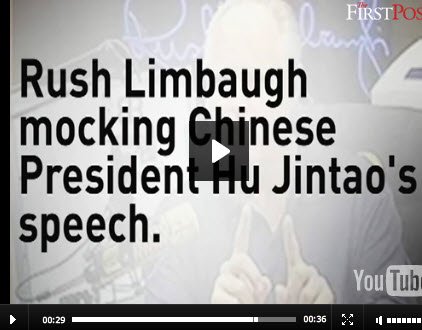 Who said the standard of political discourse in the US was slipping?

“Limbaugh has made a career out of offending as many people as he possibly can – but 1.35 billion people in one day could be a record.”

Fascinating……… Limbaugh quite apart from bemoaning the lack of a translator for a televised speech by Hu in his native tongue in the USA also made some other pertinent points in the same show:

“The 2009 Nobel Peace Prize Winner hosted a dinner for the guy holding the 2010 Nobel Peace Prize Winner in prison, and the media does not get the irony of this at all. They’re too busy running around chasing Sarah Palin and radio talk show hosts over “civility.” Our media is so fraudulent. No talk about the political prisoners. No talk about the gulags.

A question about human rights, the ChiCom leader is allowed to slither out of the answer by saying, “I did not hear the question. I thought President Obama was going to answer that.” There’s no talk about how they harvest organs from prisoners in China — and there’s Obama, telling the head of this depraved society that we’re all pleased with his country’s progress. Meanwhile, the very same media is attacking innocent American citizens who have nothing to do with a horrible crime. The moral compass of our media is just stunning — and, by the way, the media laughed when Hu Jintao side-stepped the question about human rights. Jimmy Carter has won a Nobel Peace Prize as well, and Jimmy Carter also attended Hu’s dinner.
http://www.rushlimbaugh.com/home/daily/site_012011/content/01125112.guest.html

Would Crikey write a an article bemoaning Obama lavishing the highest honour on a visiting national leader, who happens to lead a thugocracy not a democracy and which happens to be no friend of the USA in particular and the the West in general?

It’s not his moaning about the lack of an interpreter that is being questioned, its his bigoted and stereotypical mimicking of a foreign head of state.

I agree that the media don’t and should talk about political prisoners and human rights abuses. You don’t hear Rush Limbaugh talking about these things, so maybe he should be brave and lead the way. He might want to start at home with the political prisoners at Guantanamo Bay before moving on to the big wide world.

If you agree with Limbaugh’s assessment that the Leader of the Free World should not speak to or engage leaders of countries with atrocious records on human rights, then I’d really like to hear your suggestion about how the President should deal with China. While you’re at it throw in Iran and Pakistan too.

I imagine in private that Obama let the Jintao ‘slither out of’ nothing at all. Again, are Limbaugh and yourself suggesting that cornering and embarrassing the Chinese President in front of the worlds press would have been a wiser move?

I suspect that Limbaugh doesn’t give a rats about the people of China. He could care less for half of the citizens of his own country. I suspect that he is using this as yet another opportunity to dig at the Administration and stir up some anti-Obama feeling. He is making a career of it after all.

Quick Photochop I did of Limbaugh.

A soapbox parrot for all the right-wing nutters in the U.S. How anyone can take that idiot seriously only shows their lack of intell…interll…..smarts.

MLF. You are not engaging in honest argument.

If this pathetic leftist Crikey effort at smear is your main exhibit then will you decry the great John Bellushi and his regular SNL Japanese Smaurai skits and countless other entertainers?

I’m not an insane mouthfoaming hate-filled lefty with any number of personal derangement syndromes so I don’t accept the MSM regular messaging that Limabaugh (or Sarah Palin and Bill O’Reilly and Sean Hannity and ….yawn….Glenn Beck….and Laura Ingraham and ….. yawn …. Michele Bachmann…etc etc) are “hate-spewing pundit”.

Instead he has an audience of 30 million a week……..

You should at least provide an argument backed up by at least a few examples before engaging in a calumny…….

What makes you assert that it is “Limbaugh’s assessment that the Leader of the Free World should not speak to or engage leaders of countries with atrocious records on human rights”?

Why China was gifted with the highest honour during an official state visit, a White House State Dinner in the Red Room with the First Lady dressed in a red gown?

There was an official China state visit in 2006 under George Dubya…….. but no state dinner.

Your hero Obama left the Iranian people protesting in their millions after the fixed election last year hung out to dry.

He saw Dalai Lama out the delivery quarters of the White House among the refuse and without a photograph and he awards a thugs the red carpet?

Puleaeease….. Speaker Boehner and no Republican politician with the exception of Chris Christie accepted the invitation.