Gillard and the ministry for funny coats

What is it about politicians that they love to get into fancy dress whenever they make an appearance with members of the military?

Creating the climate for breaking a promise. The panel of business advisers Treasurer Wayne Swan will preside over — as the spending on flood repairs gets under way in Queensland — looks  very much like a body with the task of making it acceptable to break the promise to restore the federal budget to surplus by 2012-13. The initial comments of members all seem to point towards development being more important than fiscal propriety. The comments this morning by independents Senator Nick Xenophon and Tony Windsor MP that the federal government’s promise to deliver a budget surplus should not take precedence over the flood recovery in Queensland will also help soften voters up for the change to come.

Funny coat replaces funny hat. What is it about politicians that they love to get into fancy dress whenever they make an appearance with members of the military? Last night it was the turn of Prime Minister Julia Gillard who donned a camouflage coloured raincoat as she was accompanied by the military brass to inspect the good work being done by soldiers in cleaning up the mess left by the Queensland floods. For a while I thought Gillard might prove to be a different kind of politician but she is clearly the victim of the same pressures as the rest to provide the television cameras with a novel picture. 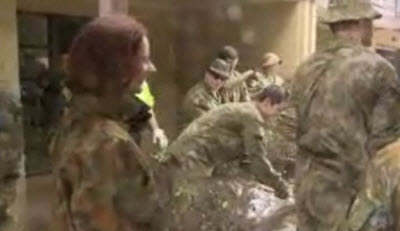 Weather update: La Niña continues to dominate. In its just issued latest ENSO (El Nino Southern Oscillation) update, the Australian Bureau of Meteorology describes the current La Niña events as one of the strongest on record. According to the Bureau climate indicators of ENSO, including tropical cloud amount, the Southern Oscillation Index (SOI), trade winds and Pacific sea surface and sub-surface temperatures, all remain well in excess of La Niña thresholds. Most have exceeded these thresholds since the middle of 2010.

During La Niña events, tropical cyclone numbers are typically higher than normal during the November to April period, while summer daytime temperatures are often below average, particularly in areas experiencing excess rainfall.

The current event has contributed to the extremely high rainfall which has affected large parts of Australia during spring and summer, including recent widespread flooding in Queensland, New South Wales, Tasmania and Victoria. Long-range forecast models surveyed by the Bureau suggest that the La Niña is likely to persist into the southern hemisphere autumn season.

The bureau reports that sea surface temperatures (SST) in the equatorial Pacific Ocean have cooled slightly over the past two weeks. The weekly SST anomaly map for the week ending January 16 shows cool anomalies extending along the equator east of 160°E. Small areas of anomalies more than 2° cooler than normal have developed on the equator. All NINO indices displayed here have cooled, reflecting the further cooling in the eastern to central Pacific. On a weekly scale, areas of cool anomalies remain in parts of the Maritime Continent north-west of Australia.

Who did they hope it was? I fear people’s hopes were dashed when they clicked mid-morning on this story link from the ABC news website:

The unfortunate victim was outspoken Afghan author and journalist Razaq Mamoon, attacked near his apartment in the capital, Kabul.

Political scandal bursts into song. Clearly there will be no early end to the great Italian political story. A committee of the country’s parliament has decided it needs another week to read through the 389 pages of material that Milan prosecutors have submitted to it in support of their application for permission to search the offices of Prime Minister Silvio Berlusconi. The prosecutors are on the hunt for evidence of payments by the Prime Minister to a series of women, including nightclub dancer Karima El Mahroug, who was 17 at the time of the alleged encounters, for s-xual favours. Berlusconi continues to deny all such allegations and was quoted yesterday declaring that “I’d be better than Superman if I’d had parties with 24 girls”.

Political journalists will have to content themselves with a critique of a new satirical song and a p-rnographic film inspired by the affair. 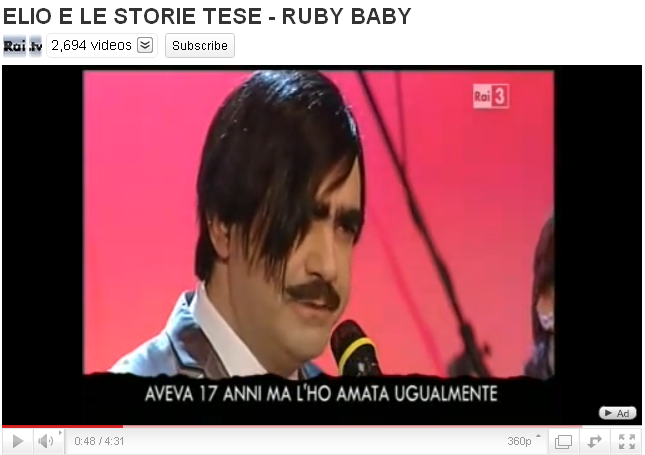 I have not yet discovered the movie, called Bunga Bunga Presidente and starring Rocco Siffredi, a well-known p-rn star whose nickname is the Italian Stallion.

I don’t want to see anyone sprayed with acid – your crack about the ABC headline is in poor taste.

We have all posted something that seemed witty in the middle of the night, but in the cold light of day it reveals itself as just crude. Your comment on the ABC headline is a prime example.