Cox: being a stamp is OK, but I’m still pushing the envelope

What does it feel like being a postage stamp? Odd, writes Eva Cox, who "accepted on behalf of the stirrers and advocates". Even if she has to put up with the jokes about people licking her backside.

Once, not so long ago, when stamps were a serious symbol of the authority of mail and post offices, it was just the monarch who was depicted. As a small child, I briefly collected stamps and remember odd interesting ones, such as a whale jawbone from the Gilbert and Ellice Islands. These types of designs were judged as less serious attempts of dubious regimes to sell stamps rather than postal services.

Times change rapidly. Stamps diminish in visibility and importance as snail mail loses much of its role. Now stamps become aimed at collectors’ sales and change often. Australia Post has a section for the process of producing stamps, which still holds some of the gravitas of the crucial mailed item stamps as symbolic of state power. There are now many new issues but still some delicious irony in creating stamps of a few women, who, at least some of the time, wanted to undermine the power of the male state.

I was therefore pleased and surprised when I was asked late last year whether I would accept being part of set of stamps to commemorate the 100th anniversary of International Women’s Day. In accepting, I hoped we could push for our issues to stay  on the political agenda. Life has obviously improved in the past century for most women in paid work since the New York garment workers originally struck for better pay, but we don’t have equal pay here as work with feminised skills is being still undervalued.

We ask that this year the Commonwealth government commit itself to extra funding for underpaid community workers if the ASU wins their current equal pay case. So I hope Canberra does not think a few stamps will act as a sop to silence criticism of its feminist credentials!

I wonder if Australia Post has to have its stamps approved by ministers?

Today, Germaine Greer, Elizabeth Evatt, Anne Summers and I are being launched in stamp mode at an Australia Day lunch in Melbourne, with all the solemnity Australia Post can muster.  The interesting irony of today is were I not attending the lunch, I would actually be demonstrating against the same organisation’s intention to close my local post office in Glebe, Sydney. 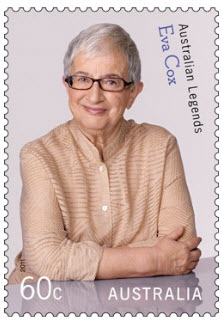 Under the excuse of its failure to be commercially viable, the old stone symbol is to go, leaving the community without a well-used centre point. This contradiction illustrates one of less attractive aspects of Australia Post’s changing roles — ephemeral postage stamps are fine but not buildings and services.

What does it feel like being a postage stamp? Odd, was my first response. As an activist with some disrespect for authority, and not an iconic author, I was surprised to be asked. I  accepted on behalf of the stirrers and advocates. The recognition helps and I hope others will see that we need political activism because we are still not making it to being the more civil society I tried to promote in my 1995 Boyer Lectures. On a very topical note, maybe the responses to the floods will remind politicians there is more to life than budget balancing as we do care about others.

And amid jokes about licking my backside, I would remind infrequent stamp users they don’t need licking any more. But I can assure you, I’ll be sticking to my last.

Congratulations Eva — you’ve been such a tireless & incisive contributor so so many important debates for decades.

This is a brilliantly composed piece Eva which encapsulates for me what the feminists should be about : political activism devoid of man-hate.
I attended a private boys school , excelled on the sporting field and academically so it is not easy to wine me over to your feminist cause .
Eva ..you’ve done an excellent job and I look forward to licking your arse (again) soon.

Would you accept – “The famously adhesive Eva” ? 🙂

Sorry to hear the bastards are closing your local PO Eva.
But, short of being immortalised by Firstdogonthemoon, I can’t imagine a nicer pic of you. Congrats+1
Therefore, I’m rushing off to buy the complete set, before Australia Post decides my local PO isn’t making enough profit.

The determinedly not-quite-neat-and-centred typeface down the right-hand side of the stamp seems entirely appropriate. I add my congratulations to those of others here, Eva – this young feminist takes her hat off to you.