Asylum seekers come south. Eighty refugees are in Darwin instead of Christmas Island after being picked up over 10 days ago. How Vodafone got hacked. Vodafone’s security and other problems in the past month or so seems to have had a large dose of self-inflicted pain by management. A friend says that every one of […]

Asylum seekers come south. Eighty refugees are in Darwin instead of Christmas Island after being picked up over 10 days ago.

How Vodafone got hacked. Vodafone’s security and other problems in the past month or so seems to have had a large dose of self-inflicted pain by management. A friend says that every one of Vodafone’s sales outlets around the country had the same pin number, so staff from one office could easily walk into another and access the corporate system, or could easily do it in their own office without anyone knowing who was doing it, even people who had left the company or been dismissed for whatever reason.

Telstra has a two-number system: every branch has a different pin and every staff member has a different pin, meaning they have to log on twice (in effect) and they also leave an electronic useage trail. Until Vodafone changes its access and security systems (which will take time and plenty of money), it will continue to have a huge potential for more problems.

Ted has nothing to say online. Almost two months after being elected Victorian Premier Ted Baillieu still has the barest skeleton of an internet presence. This home page is essentially what the Department of Premier and Cabinet put up the moment he was elected, with the addition of media releases link a few days later when they started. Now it’s one thing to declare you are going to end spin in government (we’ll see how long that lasts) but it’s another to not have anything to say. No speeches. No policy platform. No biography of who’s in cabinet. 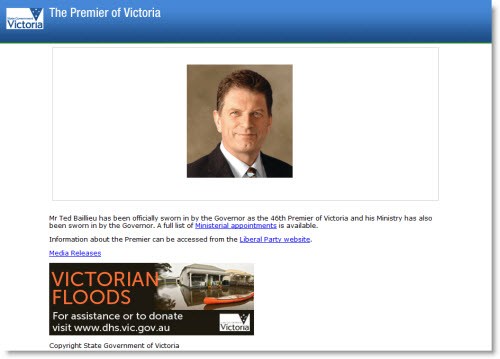 Who’s Hughie consulting to? Former Transport Workers Union secretary Hughie Williams is now describing himself as a transport consultant in the media. But truck drivers want to know who is paying his bills? It won’t be the owner-drivers. It won’t be the employee drivers. But the union dinosaur is not far off having to answer questions of who can afford a consultant. The only ones are government and big business — has to be one of them.

Brisbane’s wealthy exploiting help? There’s been some unfortunate comments on the Queensland flood disaster posted to UK economic forum Credit Crunch. Like this from one from “Brisbanite”:

Why should the government i.e. the taxpayer, pick up the tab? Although they probably will get bailed as we live in the fantasy welfare west where no one must be allowed to suffer any loss no matter how foolish. They bid up the value of these properties without factoring risk and the cost of full insurance, so f-ck them, I have next to no sympathy. As to the stupid twat volunteers cleaning up millionaires front yards for them before trudging back to their own busted arse suburb, what a joke. I heard of one well known millionaire who got a nice clean yard for free while staying at his holiday house down the coast.

And a reply from “Nationalist”:

I agree. My sister (a renter) volunteered today in St Lucia. The owners of a multimillion dollar mansion stood around drinking wine and giving orders to the volunteers to clean out their fountain, etc. Not one of the owners, or their friends, got their hands dirty — except when one washed some dirt off some bottles of expensive champagne (true!). A neighbour told my sister that the house (which was not structurally damaged) was on the market for 7 million before the flood, and that tho it is uninsured for flood damage that isn’t a problem for the owners as they are so wealthy. It makes my blood boil to think of wealthy sociopaths exploiting the kindness of young volunteers. People have died, and they get their fountains cleaned for free.