Melbourne gets a new newspaper next month -- or at least a re-branded one -- with Fairfax spruiking a new-look Saturday edition of The Age in "the biggest makeover in the paper's history".

Melbourne gets a new newspaper next month — or at least a re-branded one — with Fairfax spruiking a new-look Saturday edition of The Age in “the biggest makeover in the paper’s history”.

Confidential internal emails sent to Age staff yesterday, and obtained immediately by Crikey, reveal the Saturday edition will be re-branded The Saturday Age on February 5, alongside sweeping changes designed to modernise the paper and staunch its plummeting circulation. While Fairfax is keeping mum on specifics, Crikey understands the upscale culture section A2 will switch editors and morph into Life & Style, while the business and sport sections will follow The Sydney Morning Herald in downsizing to tabloid format.

Yesterday, Age CEO Don Churchill trumpeted “a fresh, bold design, including a contemporary new masthead in our traditional blue livery”: “The editorial team has created a paper that is very much in keeping with the modern, progressive city it serves. The layouts are cleaner. There are more navigation tools.”

The Kiwi executive goes on to attach mystical properties to the revamped hard copy, claiming the new edition will “change pace” and create “fast news pages and deeper feature spreads”. “Overall,” he wrote, “it showcases the very best of our journalism.”

The Saturday edition is the jewel in Fairfax’s Victorian crown, averaging 100,000 more sales than its weekday sister and effectively subsidising the paper’s journalism through real estate ads. But those rivers of gold have slowed to a trickle over the last decade and in some bad weeks circulation has fallen below 260,000. Nevertheless, it remains The Age‘s only profitable publishing day.

Senior Age sources told Crikey this morning the revamp, dubbed ‘Project X’ during its gestation period, was one of the biggest and most significant changes in the modern era of Australian journalism.

Culture liftout A2 will almost certainly take the Fairfax Digital Life & Style tag under the editorship of well-regarded former Epicure editor Veronica Ridge, with outgoing A2 chief Michelle Griffin — who has held the prized position for just five months following the departure of Sally Heath in August — shifted to social affairs editor.

Ridge, who snagged a prestigious Le Cordon Bleu award last year for best global food writer, is said to have played a key role in the seven-month revamp and maintains a good relationship with Age editor Paul Ramadge (by contrast, Griffin’s working relationship with Ramadge has been described as “frosty”). With Jane Willson taking the Epicure reins, the new Saturday liftout is expected to include a increased focus on food and wine in the mould of The SMH‘s Spectrum section.

Last October, Crikey reported The Age was preparing to downsize its Saturday sport and business sections to a tabloid format to match The SMH, where only the very front of the book remains a broadsheet — in most Saturday editions, sport and Business Day are part of the one tabloid liftout.

In his email, Churchill says the The Saturday Age will also reflect Victorians’ notorious workaholism, noting the first half of the weekend had become “the sixth working day of the week”.

At an investor briefing last year that led to the departure of CEO Brian McCarthy, Churchill famously referred to his company’s “deep verticals” with several scribes suggesting their boss had embraced management gobbledygook to explain away the Victorian arm’s financial under-performance.

The last major shake-up to The Age‘s Saturday edition occurred in February 2003 when Greg Hywood — then editor and chief publisher of The Age, now acting Fairfax CEO — launched the A2 section. Ironically, Hywood will now oversee wholesale changes to his cultural baby from the helm of the company.

Fairfax observers were sceptical of the changes when contacted by Crikey: “To me it is just more lack of understanding of the the value of the brand name The Age. Surely no one needs to be told it’s Saturday. The only reason The Sunday Age exists as a different masthead is because it was set up with a whole new team and was not The Age.”

In a separate email sent yesterday, and also obtained by Crikey, sales and marketing director David Hoath announced the launch of the new edition will take place at 6.30pm on Thursday, February 3 at Media House in Collins Street. He invites staff to celebrate “the beginning of a new age” and “a proud moment in the history of The Age“. 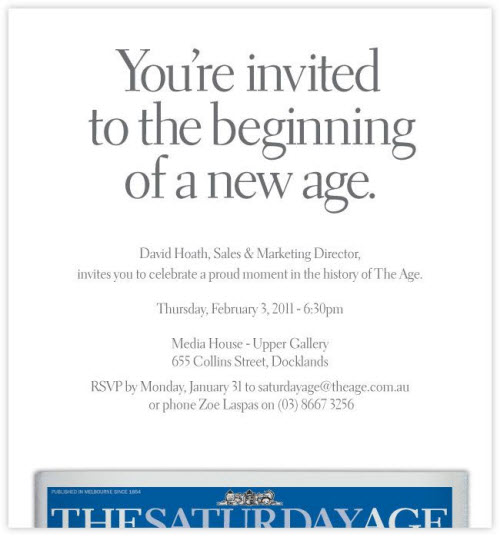 A”New Age”? It’s new age, alright. More fluff and opinion and less news will be the main result, I bet. In chasing ever-diminishing sales, The Age is ever diminishing in content. The enduring value of print is as a permanent record of important events and a medium for the communication of detailed information. Nothing else comes close. Newspapers that try to ape the nanoscale news coverage and bloated lifestyle journalism of TV and the web are simply writing their own epitaphs.

Why is it necessary to call Don Churchill a “kiwi” executive? I don’t know the man or his background. But am I alone in finding this snide racial branding offensive and unnecessary? Does being a Kiwi make him more harsh, more uncompromising, more stupid? We are a land of immigrants, Andrew; no doubt you have a diverse ethnic lineage. Snide branding like this detracts from your journalism.

Oh glory, say it isn’t so. More fluff, less substance? More one page profiles of celebs and self-indulgent navel-gazing by Mia Freedman types (Sunday Age) and self-proclaimed lifestyle advisers? The Age is so lightweight on the weekend I have to pin it down with bricks to read it. The Good Weekend, from its glory days, now boasts a couple of celeb stories – gone are the days of six or seven page, in-depth articles. You wouldn’t know it from the GW letters section though – it’s full of sucky letters, trying to win letter of the week, and better yet, letter of the month and a free night at some lifestyley B and B The Age is so fond of.

The decline of The Age is the reason I subscribe to Crikey. So, I suppose, you won’t mind The Age’s further descent.

“Dolly” for aspirational 30-something mums and dads with a mortgage and lots of disposable income. Yuck.