Ailing Gold Coast Bulletin editor Dean Gould appears to be launching a last ditch effort to shore up his position, donning gumboots to address local volunteers bussed in to the Brisbane suburb of Goodna to help flood relief. Plus other media news of the day.

Gold Coast Bully editor up a tree, boots and all. Ailing Gold Coast Bulletin editor Dean Gould appears to be launching a last ditch effort to shore up his position, donning gumboots to address local volunteers bussed in to the Brisbane suburb of Goodna to help out with flood relief on Monday. 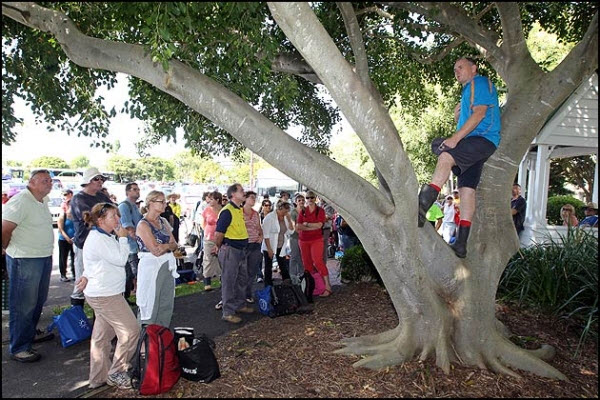 Gould has rumoured to have fallen out with News Limited headquarters after record circulation falls and embarrassing revelations concerning former star columnist Graham Staerk. Meanwhile, Townsville Bulletin editor Peter Gleeson, strongly tipped to replace Gould at the helm of the Bully, has continued his excellent work during the flood crisis, leading with a memorable ‘LOST’ in about 198 point font when the full extent of the Brisbane disaster became clear. — Andrew Crook

Unfortunate website ad placement #437. From yesterday’s West Australian online. Hard to recruit police when your lead story is this… 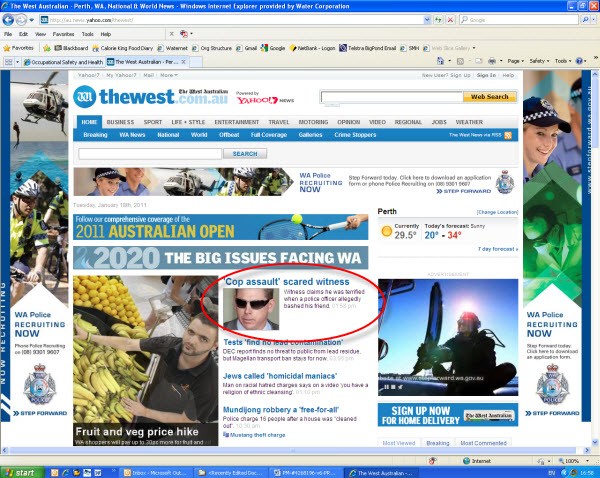 News of the World feigns shock at new twist in the phone-hacking saga.

“Does News International take the British public for fools over the News of the World phone-hacking scandal? Or are its executives engaged in a pathetic attempt at fooling their own proprietor, Rupert Murdoch? Last night, as James Robinson reported, the company’s defence that hacking was confined to a single rogue reporter was in tatters.” — Roy Greenslade, The Guardian

“Government regulators on Tuesday gave Comcast Corp., the country’s largest cable company, clearance to take over NBC Universal in a deal that is certain to transform the entertainment industry landscape.” — Huffington Post

Facebook books $1.86B in advertising; muscles in on Google turf.

“According to an estimate from eMarketer, Facebook took in $1.86 billion in worldwide advertising revenue for 2010, a 151% increase over the company’s estimated 2009 advertising revenue of $740 million worldwide. Not surprisingly, the majority of that, $1.21 billion, was earned inside the U.S.” — Advertising Age

“Social participation by American Internet users is described in the latest survey from the Pew Research Center’s Internet & American Life Project. Their research shows how the Internet is impacting users’ engagement with civic and social groups.” — Poynter

iPad is driving 10% of new digital subscriptions for the Financial Times.

“The Financial Times is enjoying a big rise in digital revenue, the publisher announced on Friday. As much as 10 percent of new digital subscriptions are coming from iPad users alone.” — Beet.TV

That’s not Natalie Bar, the usual Sunrise newsreader – she is on holidays. The lady in the photo is Samantha Armytage.

The tradies thing is not even original. Sunrise pulled the same stunt after Cyclone Larry wiped out Innisfail in March 2006. It’s even recorded on Wikipedia (albeit without the reference to Sunrise): http://en.wikipedia.org/wiki/Cyclone_Larry#Tradesmen_and_prisoners
At the time, Sunrise spruiked it as Kochie cutting thru the red tape while government floundered, if I remember correctly.

“Hard to recruit police when your lead story is this…”
Au contraire. This is just the type of copper WA governments love.
Been tasered letley? Come on over to Perth, it’s a buzz.