Anna Bligh commanded immense media attention this week — and as flood waters rose across Queensland so did her standing. While it remains to be seen if that will be enough to turn her fortunes around at the next election, we note that three women remain atop our list in a likely first for Australian political coverage. You go girls.

Expect the asylum seeker issue to gain more tabloid steam as Immigration Minister Chris Bowen starts talking tough. In a blow to the refugee lobby, Bowen announced an agreement with the Afghan government likely to see one sixth of the Afghan boat people who arrived here since 2008 returned to the war-torn country.

West Australian Opposition Leader Eric Ripper is the biggest mover this week. He debuts here having fended off his (former) shadow treasurer and factional ally Ben Wyatt for the leadership. Cue tip for young Labor players about wading into a stoush without shoring up union support first. 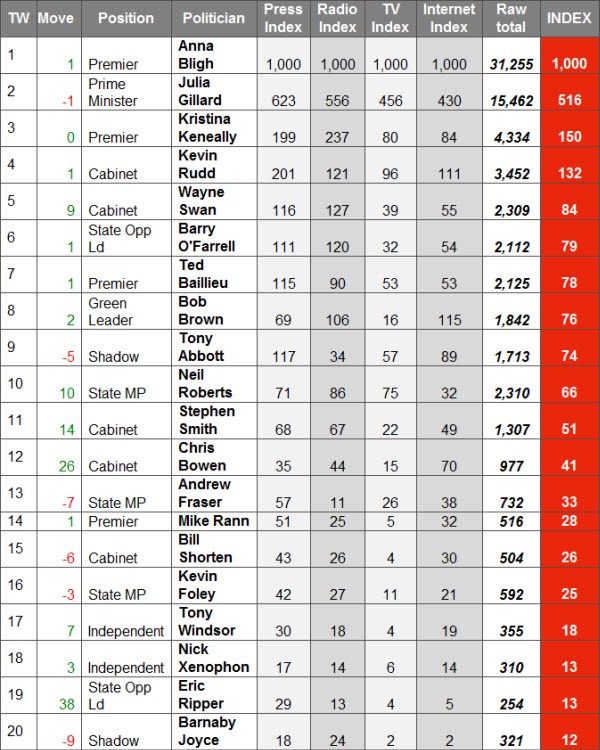 Talkback volumes pick up, but still no Tony Abbott. The silence is deafening. Greens coverage continues to head north.

As Nadal bids to become the first man in 42 years to hold all four tennis slams simultaneously, he’s unlikely to reflect that the Australian Open has shared the headlines with some mighty natural disasters in recent years. Good luck Rafa…