A hex on graduates staying at home

The Murdoch Sundays were on the track of student bludgers at the weekend -- professional students who keep racking up HECS debts by taking one degree after another without ever getting a proper job to earn enough money to have to start paying back their debt.

Go away young graduates. The Murdoch Sundays were on the track of student bludgers at the weekend — professional students who keep racking up HECS debts by taking one degree after another without ever getting a proper job to earn enough money to have to start paying back their debt.

I have no idea how costly a problem it actually is but the story did put the thought in my mind that this system of charging for tertiary education must give graduates a big incentive to use their skills overseas rather than in Australia. A kind of government incentive for a brain drain.

The big brothel. The prosecutors pursue the prostitutes while the press try and find the Prime Minister’s mystery girl friend. Political journalism does not get any better than this. 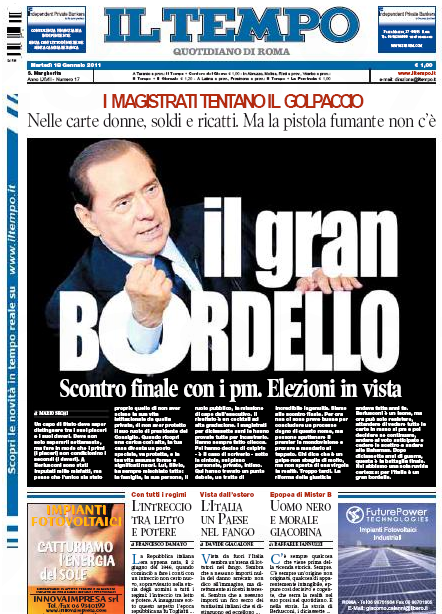 A two film race? With the Golden Globes run and won the race for best film Oscar appears to be down to two. The Crikey Election Indicator has Social Network a clear favourite over The King’s Speech

Quote of the day: From Paul Krugman’s blog:

Upton Sinclair’s principle: it’s difficult to get a man to understand something when his salary depends on his not understanding it. In … general right-wing think tanks prefer people who genuinely can’t understand the issues — it makes them more reliable.

Comment of the day: Playwright David Williamson responds to a piece in Crikey calling him “an aging irrelevance” after the author saw his latest play.

Perhaps we need an Obama figure to urge moderation in arts discourse as your rhetoric does make it difficult to not be taken aback by the sheer rage you exhibited. Part of this can I suggest might be a misreading of the play. Don and Mal’s whinges and rhetoric about the political situation are being satirised, not endorsed.

The audience is certainly reading it this way, laughing heartily at these two aging bullshit artists who have, as you say, no real ideas to tackle the really pressing problems we are all facing. I thought that that was pretty clear at the end when they are drunkenly reminisce about the glorious sixties, the high points of their lives.

In fact, the point of the play was not the fatuous political debate, it was meant to be a look at long term friendships, marriages and family, and the tone was, as is more common at my age than yours, ultimately warm and forgiving.

However imperfect these relationships matter, family matters and when people are approaching the end of their life and looking back and trying to make sense of it, they matter even more.

“the story did put the thought in my mind that this system of charging for tertiary education must give graduates a big incentive to use their skills overseas rather than in Australia.”

I believe that this phenomenon has in fact become a major factor in New Zealand graduates not staying at home. Even if you intend to go home, it makes sense to go overseas, get a higher income and use that to build a nest egg to pay off HECS later on.

This was the conclusion of Birrell, Bob, Rapson, Virginia and Smith, Fred T (2006) Australia’s net gains from international skilled movement. Skilled movements in 2004-05 and earlier years, Commonwealth of Australia, Canberra.

On page 25 they report OECD figures that 3% of Australian tertiary graduates live in other OECD countries, rather lower than the 17% for the UK, which also has income contingent loans for higher education tuition fees (soon to almost double to Aus $9,500 per annum).

I worked at the University of Auckland for a couple of years and watching the graduate destinations came to the conclusion that educated New Zealanders were New Zealand’s main export after dairy products.

Quite apart from the issue of pluses/minuses re student migration, is anyone really prepared to argue that it’s good for a country to have policies which subsidise poor quality students through multiple studies, when they will never be sufficiently productive to end up repaying their financial obligations?

Of course no one wants to subsidise poor students, but there is no instrument that can identify poor prospective students which doesn’t also exclude many good students. So the question is: how many poor students should the taxpayer tolerate? The national higher education subject pass rate is about 80%, which I think is pretty good.

Whether graduates earn enough to repay their Hecs debt is another issue. There are many good reasons for graduates not repaying their debt: they are employed in demanding but low paying jobs, they use their skills to volunteer, etc. Much of the unpaid Hecs debt is owed by women who by the structure of the workforce and society spend many years out of the paid workforce because they bear a disproportionate burden of child care and get paid rather less than men anyway cos women have lower earnings than men.