The problem with putting your application on iTunes is you open yourself up to scrutiny. In fact, many of the comments on News Limited's roll-out of iPad applications have been positive. Plus, other media news of the day.

Advertising your worth. The problem with putting your application on iTunes is you open yourself up to scrutiny. In fact, many of the comments on News Limited’s roll-out of iPad applications have been positive. Adelaide tabloid The Advertiser had one particularly glowing five-star review, as one eagle-eyed Crikey reader captured for us:

“Worth the cash”! Stop whining! We’re sure that’s not the very same Paul Starick who is the online editor of The Advertiser. But then, the comment seems to have now disappeared from the iTunes page… — Jason Whittaker

Nova news gaff. Well this is just embarrassing: Dan Ilic uploaded a news break from pop station Nova in Sydney today that caught the presenter in an unfortunate verbal slip…

We can only assume she meant respirator…?

The Age farms for more readers. Did you pick this up late last year? I didn’t notice this originally, as it was in junk mail — but Fairfax offered home delivery (Thu-Sun) to customers of Aussie Farmers Direst at just $52. Surely they would make a big loss on this? They’ve already removed the offer from the website, though it is valid until the end of 2011. — a Crikey reader 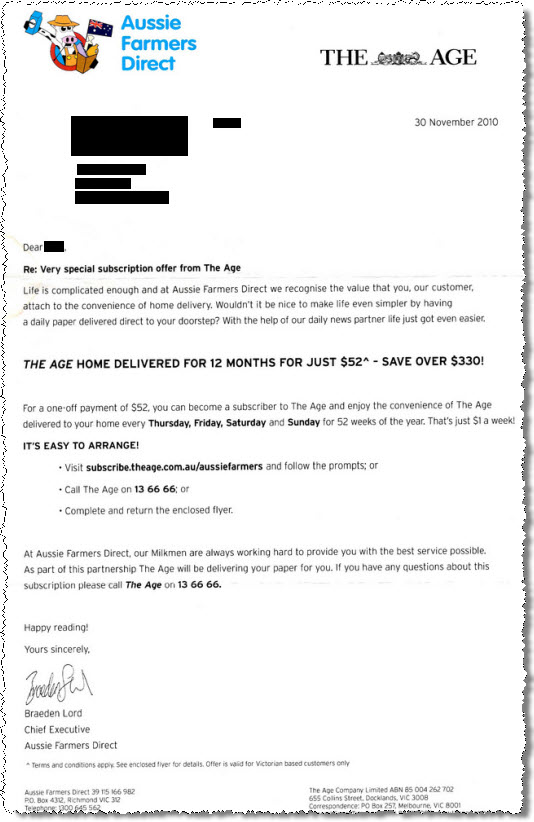 Despite Tunisian protests, PR agencies still pushing it as a holiday destination.

“Not even the continuing presence of tanks and tear gas could prevent Tunisia’s British spin doctors from trying to sell the nation as an ideal holiday destination today. The allure of golden Mediterranean beaches, thalassotherapy resorts and historic ruins topped the agenda of the collapsed government’s London PR executives who seemed to spot an opportunity amid the civil unrest and violence.” — The Guardian

“It’s the morning after the Golden Globes, and the big story is: How big of an asshole was Ricky Gervais? Most of the host’s bloodletting happened in the opening monologue.” — New York Magazine

“The Pentagon, not a place one immediately thinks of when imagining social media, has shut down its dedicated social media office, once staffed by a tech guru and a communication pro who both focused on nothing but Twitter, Facebook, and the rest.” — Media Bistro

A day in the life of Washington media monitors

“Getting up early is nothing new, but the lightning speed of news on the Internet and the proliferation of outlets like Politico, which place a premium on “winning” the day, has made the job more demanding and pushed the mornings ever earlier.” — New York Times

JFK library to put all its records online

“The presidential library commemorating the life of US President John F Kennedy is digitising every scrap of paper, video, audio and artefact it possesses. To date more than 200,000 pages have been digitised along with 1500 photos, 72 reels of film and 300 reels of audio tape containing 1245 individual recordings of telephone conversations, speeches and meetings.” — BBC News

“The ABC is to air This American Life, one of the world’s most popular podcasts. It will be the first time the show has been broadcast in Australia. This American Life will air on ABC Radio National on Sundays at 7pm.” — mUmBRELLA

The parting shot at gossip-mongers … The Age’s dodgy graphs