Feds’ spin is all show, no go

The spin doctors are still in charge.

Giving the illusion of action.  The spin doctors are still in charge. The creation by the federal government of a business task force to help Queensland as it recovers from its severe flooding is sheer show business. It will serve no useful purpose other than providing a forum for grandstanding.

Perhaps the Premier is just working. The Victorian Premier Ted Baillieu is one politician who does not seem to be obsessed with the need to appear on the radio on the hour every hour and to provide photo opportunities for the nightly television news. That makes his reaction to the Victorian floods stand in stark contrast to those of the Prime Minister, Julia Gillard, the Queensland Premier Anna Bligh and, to a lesser extent, the NSW Premier Kristina Kenneally. His peers spend their time out and about expressing sympathy with flood sufferers. Baillieu seems more concerned with being in the right place to ensure that the job of helping them is actually being done.

The great beer decline. Following some controversy over the previous historical estimates, the Australian Bureau of Statistics today published new figures on the nation’s alcohol consumption. The figures now take better account of increases in the average alcohol content of wine over the years. One striking conclusion is how we have stopped being a nation of beer drinkers, with consumption declining gradually but consistently since the 1960s, while wine and spirits consumption have increased. At the start of the ’60s, beer made up three quarters (76%) of all pure alcohol consumed, but in recent years this has fallen to under half (44%). Wine has increased threefold over the same time (12% of all pure alcohol consumed in 1960-61 to 36% in 2008-09) while spirits have nearly doubled (12% to 20%). 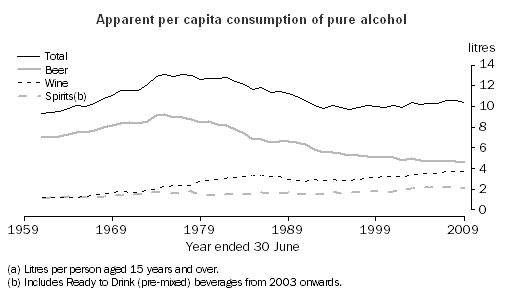 Political correctness in dire straits. It has taken a few years — the lyrics found offensive were recorded in 1985 — but in Canada they have ordered the Dire Straits hit Money for Nothing off the airwaves. The Canadian Broadcast Standards Council (CBSC) reviewed the song after receiving a complaint from a listener in Newfoundland. It found the lyrics to be “unacceptable” because of the use of the word “faggot” and banned radio stations nationwide from playing it.

These lyrics were considered in the context of these provisions of the Canadian radio watchdog:

Recognising that every person has the right to full and equal recognition and to enjoy certain fundamental rights and freedoms, broadcasters shall ensure that their programming contains no abusive or unduly discriminatory material or comment which is based on matters of race, national or ethnic origin, colour, religion, age, s-x, s-xual orientation, marital status or physical or mental disability.

Recognizing that every person has the right to the full enjoyment of certain fundamental rights and freedoms, broadcasters shall ensure that their programming contains no abusive or unduly discriminatory material or comment which is based on matters of race, national or ethnic origin, colour, religion, age, gender, s-xual orientation, marital status or physical or mental disability.

Broadcasters shall avoid the airing of degrading material, whether reflected in words, sounds, images or by other means, which is based on race, national or ethnic origin, colour, religion, age, gender, s-xual orientation, marital status or physical or mental disability.

Broadcasters shall be sensitive to, and avoid, the usage of derogatory or inappropriate language or terminology in references to individuals or groups based on race, national or ethnic origin, colour, religion, age, gender, s-xual orientation, marital status or physical or mental disability.

b) It is understood that language and terminology evolve over time. Some language and terminology may be inappropriate when used with respect to identifiable groups on the basis of their race, national or ethnic origin, colour, religion, age, gender, s-xual orientation, marital status or physical or mental disability. Broadcasters shall remain vigilant with respect to the evolving appropriateness or inappropriateness of particular words and phrases, keeping in mind prevailing community standards.

Broadcasts may fairly include material that would otherwise appear to breach one of the foregoing provisions in the following contextual circumstances:

Legitimate artistic usage: Individuals who are themselves bigoted or intolerant may be part of a fictional or non-fictional program, provided that the program is not itself abusive or unduly discriminatory.

The Panel Adjudicators read all of the correspondence and listened to the challenged broadcast of the song. The Panel concludes that CHOZ-FM breached Clause 2 of the CAB Code of Ethics, and Clauses 2 and 7 of the Equitable Portrayal Code. The Panel also found that CHOZ-FM breached Clause 9 of the Equitable Portrayal Code and that Clause 10(a) of thatCode did not relieve CHOZ-FM of those breaches.

Crikey readers can listen to the song here: 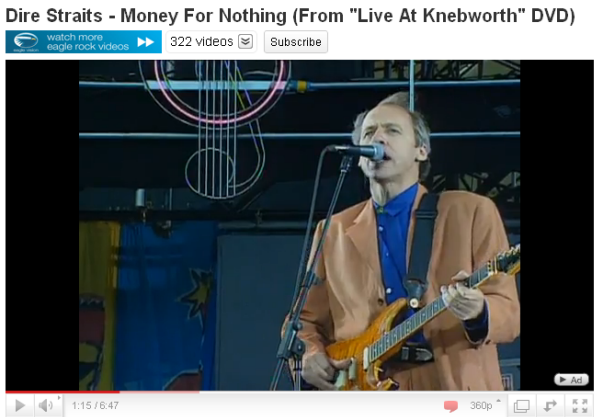 Dire Straits’ keyboardist, Guy Fletcher, commented on his website that he reckoned Canada could ban about 75% of ALL records ever made.

He argued that “you can and should be allowed to write a song or poem and use language that is or has been in use by real people in everyday life … MFN does not “celebrate” a slur. In it, Mark [Knopfler] uses real everyday US street language to describe how a numbskull worker in a hardware department … feels about a video being shown. The fact that the [CBSC] can make a ruling such as this, completely missing the context in which it’s used says rather a lot about the society in which we live.”

Somewhat more pointedly he posted this comment and illustration:

It’s more fun in Italy. Political journalists in Italy have more fun. I mean to say, covering the comings and goings of Ms El Mahroug, widely known by her stage name Ruby Rubacuori — which translates as Ruby Heartstealer — beats writing about projected budget deficits in 2012-13 hands down. 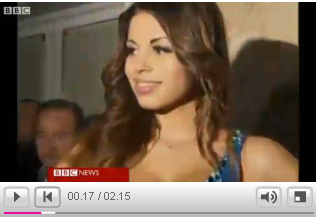 The BBC reports that Italian prosecutors have alleged that Italian Prime Minister Silvio Berlusconi had s-x with a “significant number” of young prostitutes. In a request to search some of Berlusconi’s properties, they cited allegations that he had paid the women or given them free use of apartments.

Berlusconi is also suspected of abusing his power to have the 17-year-old dancer, Karima El Mahroug, freed from a police cell. The prime minister has previously admitted calling the police on Ms El Mahroug’s behalf, but says he did nothing wrong and acted out of pity. Ms El Mahroug has denied having s-x with  Berlusconi, though she has said she received money from him. 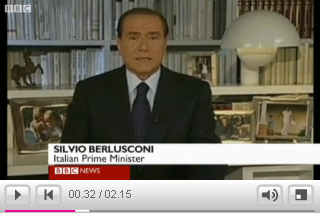 Berlusconi appeared on television this week to deny the allegations being made against him. He had no trouble obtaining airtime as he owns the station.

You can tell Baillieu, new to this “leadership caper”, has a lot to learn – he’s not acting like a politician yet.

The alcohol consumption figures are unsurprising, given that:
– 99.99% of Australians don’t know what beer is, and
– 99.9% of the beer brewed in Australia has less flavour than water.

Guy Fletcher’s reminder about “faggots” as foodstuff reminded me that, in the 1980’s, an Australian advertising guy working in Britain came up with the slogan, “Fork a faggot.” It was used for several years. I wonder how the Canadians would feel about that?