A stronger than normal La Nina

As Queensland clears up from the floods, NASA is reporting that the La Nina weather event responsible for the rain is one of the strongest on record.

A stronger than normal La Nina. As Queensland clears up from the floods, NASA is reporting that the La Nina weather event responsible for the rain is one of the strongest on record. The La Niña is evident by the large pool cooler than normal (blue and purple) water stretching from the eastern to the central Pacific Ocean, reflecting lower than normal sea surface heights. 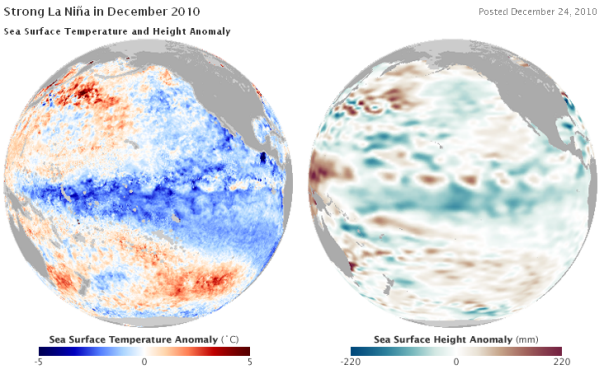 “The solid record of La Niña strength only goes back about 50 years and this latest event appears to be one of the strongest ones over this time period,” said Climatologist Bill Patzert of JPL.

“It is already impacting weather and climate all around the planet.”

“Although exacerbated by precipitation from a tropical cyclone, rainfalls of historic proportion in eastern Queensland, Australia have led to levels of flooding usually only seen once in a century,” said David Adamec, Oceanographer at NASA’s Goddard Space Flight Center, Greenbelt, Md.

“The copious rainfall is a direct result of La Niña’s effect on the Pacific trade winds and has made tropical Australia particularly rainy this year.”

Let’s invade them again. As crude oil prices hover around the $US100 mark and Americans get edgy about the rising price of gasoline memories of Rupert Murdoch’s plan to make things cheaper have been revived on his Fox News television network.

Sean Hannity, during a discussion by the Great American Panel about high gas prices, claimed they are “now gonna go up to three, four, five dollars a gallon again.” The panel ruefully noted that Arab sheiks possess great amounts of oil, and pointed out a recent statement by Kuwait’s oil minister that he believes the market can withstand $100-per-barrel oil. 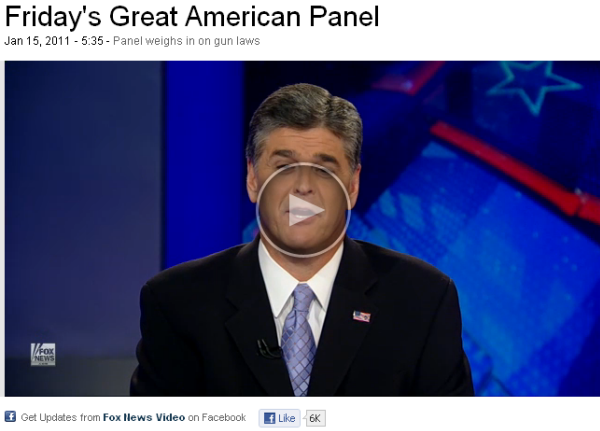 After noting that Kuwait is a country that “would not exist [but] for us,” Hannity angrily offered his remedy:

HANNITY: There’s two things I said. I say why isn’t Iraq paying us back with oil, and paying every American family and their soldiers that lost loved ones or have injured soldiers — and why didn’t they pay for their own liberation? For the Kuwait oil minister — how short his memory is. You know, we have every right to go in there and frankly take all their oil and make them pay for the liberation, as these sheiks, etcetera etcetera, you know were living in hotels in London and New York, as Trump pointed out, and now they’re gouging us and saying “oh of course we can withstand [these prices].”

Back in February 2003, boss man Murdoch in defending the invasion of Iraq said:

“We can’t back down now. I think Bush is acting very morally, very correctly, and I think he is going to go on with it.

“The fact is, a lot of the world can’t accept the idea that America is the one superpower in the world.

“The greatest thing to come out of this for the world economy, if you could put it that way, would be $20 a barrel for oil. That’s bigger than any tax cut in the any country.”

The price of oil at the time was around $34 a barrel.

Afghan boat people drown. The BBC reports that Greek coastguards are searching for 22 people missing after a boat carrying migrants sank off the island of Corfu. The wooden vessel was carrying more than 260 passengers, most of whom said they were from Afghanistan, when it ran into trouble in rough seas. This sad story just makes a mockery of the argument that Australia turning back the boats will somehow prevent tragic deaths.

Some realism about Tunisia. My colleague Bernard Keane posted on our Crikey blog The Stump at the weekend some thoughts on the role played by Twitter and Facebook in the rolling series of protests that overturned the regime of Tunisian dictator Zine El Abidine Ben Ali. But as you ponder the influence of the social media, keep in mind this assessment by Robert Fisk in this morning’s edition of The Independent:

Yes, Tunisian youths have used the internet to rally each other – in Algeria, too – and the demographic explosion of youth (born in the Eighties and Nineties with no jobs to go to after university) is on the streets. …

The truth, of course, is that the Arab world is so dysfunctional, sclerotic, corrupt, humiliated and ruthless — and remember that Mr Ben Ali was calling Tunisian protesters “terrorists” only last week — and so totally incapable of any social or political progress, that the chances of a series of working democracies emerging from the chaos of the Middle East stand at around zero per cent.

The job of the Arab potentates will be what it has always been – to “manage” their people, to control them, to keep the lid on, to love the West and to hate Iran.

Oil – forgive my blaspheming, but jesus h christ. I mean what can you even say to that? If only it were possible to pass it off as bl-ody americans, but they are being brainwashed by an Aussie with a chip on his shoulder and more dollars than decency. I mean seriously, I just can’t believe that. How many millions of mindless Americans are going to be walking their streets this week saying “Iraq and Kuwait owe us oil….”. How about you stop driving your big fat butts around in big fat oil guzzling cars you w-nkers!

Afghans – for those that missed it a massive human trafficking ring was exposed last week in Italy. Mostly Afghani refugees paying a small fortune to escape their country and being mistreated, abused – if not killed – instead. This is a cruel and evil problem that is not going away.